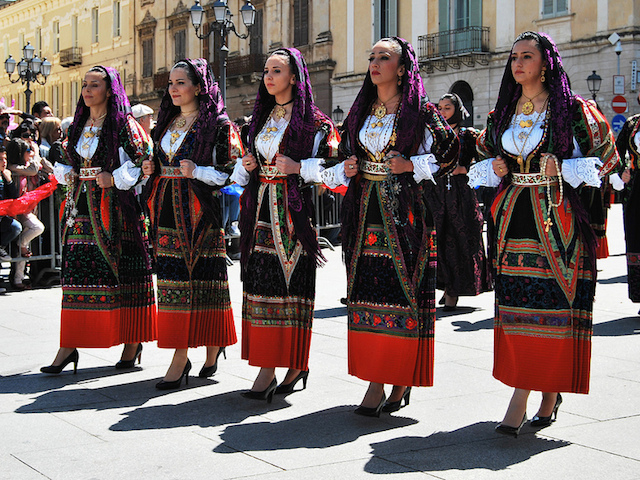 Are you ready to ride?

The Cavalcata Sarda is a not-to-be-missed event during spring in Sassari, one of the provinces in the north of Sardinia.

The very first cavalcade was organized in 1899 to greet the arrival of King Umberto I and Queen Margherita of Savoy on the island.

Now in its  67th modern edition, this 4-day festival celebrates the victory of the Sardinian people over the Saracens, which took place in the year 1000 and attracts tourists and visitors from every corner of the island who want to discover one of the most beautiful laic event of the Sardinian folklore.

In fact, for the occasion you can see chariots, horses, oxen, donkeys, traditional masks, bands and folk groups, in their unique costumes and coming from every province, parading through an established route in the historic center of the city. During the show you will be amazed by the many different colors of costumes and by the sparkle of jewelry made in the context of Sardinian handicraft and worn by the women involved.

The parade will take place on Sunday morning, while in the afternoon there will be the exhibition of equestrian pariglie at the Racecourse ‘Pinna’. The pariglie consists on a race where riders make incredible aerobatics, running balance on galloping horses.

You can follow the parade route through the streets or sitting comfortably in the stands in Piazza d’Italia, by purchasing a ticket at the price of 10,00 Euros.

In the earlier days there will be, among others, reviews of traditional songs and dances, tastings of typical products and several exhibitions.

For further information and for the programme of the Cavalcata Sarda 2014 , you can download the front and the back of the leaflet.

One Reply to “Cavalcata Sarda: the typical horse riding in Sardinia”