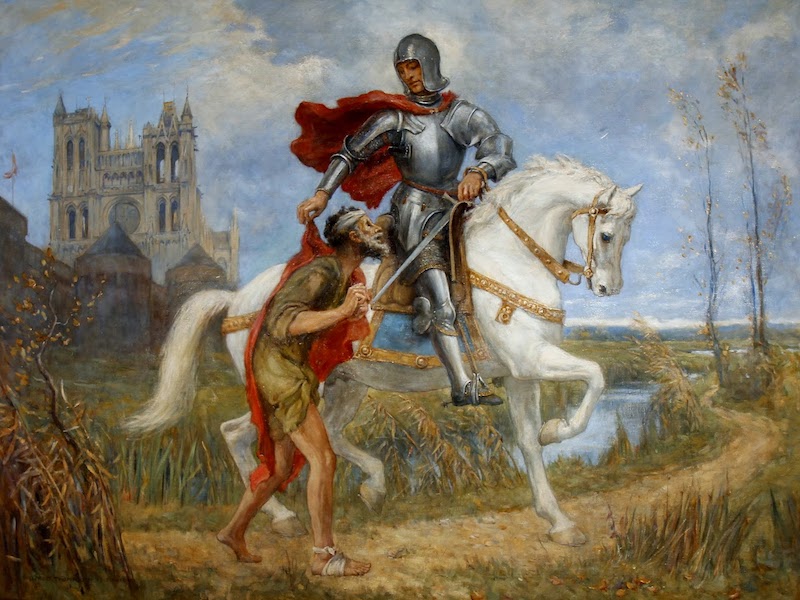 The tradition of celebrating Saint Martin’s Day in Italy

Saint Martin’s Day in Italy is a very popular celebration and we link this celebration to wine, geese and chestnuts. It is celebrated on 11th November and its origin dates back more than 1,000 years ago. Everywhere in Italy you can find celebrations, religious or not. But why is a festive day? Why Saint Martin’s Day has been called also Estate di San Martino (Indian Summer)? Why are there many festivals and religious celebrations in honour of Saint Martin in addition to November festivals and events in Italy? Why do Italians drink wine and eat goose? Wait! Don’t be hasty. There’s an interesting story that needs to be read. Are you ready?

Who is Saint Martin?

Martin was born in 316 AD in the Pannonia region (today’s Hungary). His name was chosen by his father in honour of Mars, god of war, because he was destined for military career. He studied in Pavia, where he spent his childhood until he was drafted into the imperial army at the age of 15. The Roman law obliged him to enlist into the army just like his father, even though he was a paeceable boy.

At school he started to be interested in the Catholic religion and after that he received the baptism unbeknown to his parents, because they still believed in Roman gods. His humility and his generosity were so big that many legends and stories are told about him. The most famous one is related to Saint Martin’s Day. While he was going out of Amiens in France, Martin saw a pour old man shaking with cold. So he cut his wool mantel in two parts and gave one part to the man. After that the temperature started to raise and the sun came out. Martin dreamt of Jesus that night: he was covered by half of his mantel and he was giving it to him back. When Martin woke up, the mantel was intact.

Saint Martin’s Day is also called “estate di San Martino” (Indian summer), because it refers to a mild period between 8th and 11th November. Martin died on 8th November 397, but he is celebrated on 11th, the day of his funeral.

Why is Saint Martin so popular?

Saint Martin is popular for some reasons. The first one is that the celebration of the Saint coincides with the ending of the Celts New Year’s Eve celebration, the ‘Samuin‘. As Saint Martin was well known in the Western Europe during the 8th century AD, the Church moved the Celts traditions into the Catholic celebration of the Saint. In Italy during the first day of November farmers and property owners renewed the seasonal agreements and they opened the barrels to taste the new wine for the first time. In addition to this, the fast prior to Christmas started on 12th November, for that reason people used to enjoy a banquet the day before.

While I was gathering the information about Saint Martin I found an endless list of common sayings related to the saint and also the traditions of the countryside. Here following I wrote the list of the common sayings – some of them in local dialect – together with their meanings because they tell us how rural people spent the beginning of November in the past. Saint Martin is the day of the wine…

… is also the time to till the soil…

You came at the end of the article and I want to leave you with a special poem written by Giosué Carducci, an Italian poet and writer. Tomorrow I will post an article about how we celebrate St. Martin’s Day in Italy, but in the meanwhile try to read the poem… in Italian!