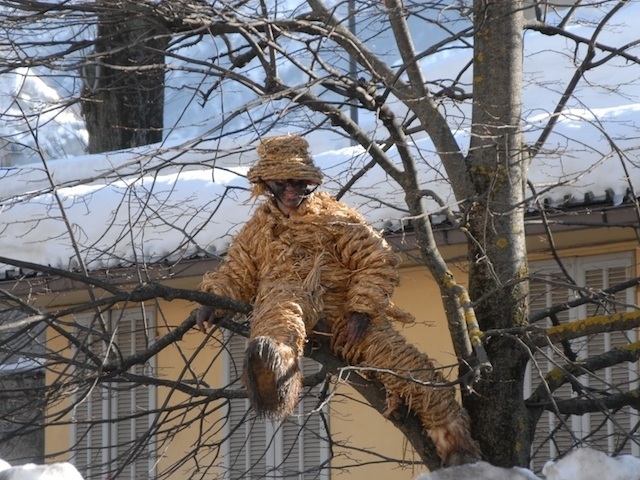 Traditional Carnival celebrations are rich in analogies and similar practices to those that take place throughout Europe about winter fertility rituals.

They represent the most profound legacy of peasant society and mountain: the pre-Christian rites of ancient origins, often lost by modernization and nowadays successfully found and replicated.

I would like to describe here some of the Carnivals in Piedmont reborn thanks to the passion and love of their land and their historical traditions.

The bear that announces the Spring

In Mompantero, a small town in the province of Turin, is celebrated ‘the dancing bear’ or ‘Fora l’Ours‘.

It is a feast of rich allegorical meanings , only one of its kind in the Alpine panorama, where the figure of the bear plays a very prominent role in the event.

In fact, according to the tradition of medieval mountain in the first night of February, the bear awakes from its winter hibernation and looks at the sky.

If it is clear (full moon) it holes up again, because the winter storage will last 40 days. If the sky is dark (new moon), then the bear goes out of its shelter to announce the beginning of Spring.

Bears, wolves and wild men in the Carnival of Lajetto

They leave the Carnival celebrations of Condove (mountain village in the province of Turin).

Bears of straw or feathered, wolves and wild old men in the streets of the country symbolically embody the transition from Winter to the awakening of Spring after the long Winter rest. One of the most original costumes is ‘Orso-Pajaso‘.

A rite, for the agricultural year, which culminates with the cutting of the head of a cock (now a puppet).

The initiative is coordinated by the Cultural Le Barbuire, which has been organizing the Carnival of Lajetto since 2010 in collaboration with the municipality of Condove.

The next edition will be on 2023 due to the pandemic.

The Bear of Rye Valdieri (town in the province of Cuneo) is another symbol of the wild: l’ours, covered with twisted stalks of rye, is chained by tamer and accompanied by a group of players semitun, the organ of the traditional Occitan music.

Even this Carnival has been revived after a long period of interruption lasted about 40 years.

In 2007 the Carnival Alpine Bear Rye was repeated by Rye Ecomuseum, with the support of the Maritime Alps Natural Park and the City of Valdieri, recovering the memory of a local elder that a young man had played, more than once, the mythical figure of Carnival.

Alternating the spectacular Bear straw there will be another traditional mask valdierese represented by ‘Brother’.

Men in frock singing songs together and reciting in procession with the scanning of the Rosary phrases and jokes on the inhabitants of the countries in Gesso Valley and neighboring ones.

These are just some of the many events that will take over in Piedmont with proud traditions and folk tales of a peasant past.