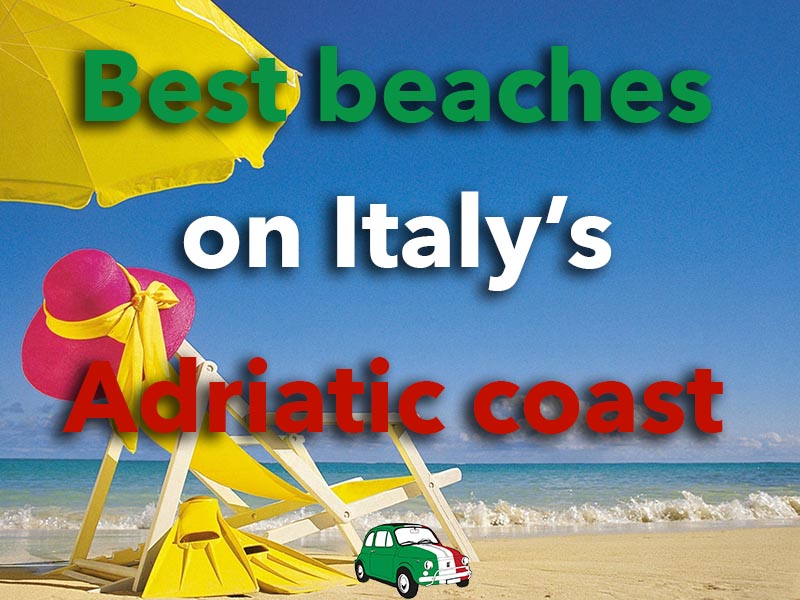 What are the beach resorts not to be missed along the Adriatic coast?

Italy has 20 regions and only 5 of them aren’t touched by the sea. Italy has the Tyrrhenian sea on the west side and the Adriatic sea on the east side.

Along both coasts there are a lot of beaches where to go and not far from important cities too.
Today I will talk about the best beaches of Adriatic coast because it is the side that I know better. Actually I live along the Adriatic coast, near Senigallia in Le Marche.

Continue to read if you’d like to know which Italian Adriatic beach resorts are the best.

If you have in your mind the pictures of Sorrento or the Cinque Terre… forget them!

The Adriatic coast is quite the opposite.

Long, sandy beaches with a lot of spaces for lying in the sun, playing beach games and going for a stroll along the foreshore. Adriatic sea is a shallow-sea compared with the Tyrrhenian sea or the Ionian one. Its flat, linear coastline is interrupted by two promontories:

The Adriatic costs offer private beaches with beach establishments alternated with public beaches. If you need to know which is the difference between these two kinds of beach, read the article about the beach etiquette in Italy.

Since always the northern part of the Italy’s Adriatic Sea had been beeing popular among European people coming mostly from Germany, Austria and Sweden.

It includes the coasts of Friuli, Veneto and Emilia-Romagna.

The best beaches of the Adriatic coast in Friuli are two.

Grado has a long tradition as beach resort thanks to the Hapsburg’s family, who choose this place to nurse the royal children. The sun shines on the beach from the sunrising till the sunsetting thanks to the favourable position. Grado’s beach is kid and dog-friendly.

Lignano Sabbiadoro, where ‘sabbiadoro‘ means golden sand, is located between Venice and Trieste. It has 8 km of beaches. This beach resort is full of shops, open-bars and restaurants where it will be a pleasure having breakfast or drinking an aperitivo in front of the sea.

Do you know that Venice has a beach?

It finds on Lido di Venezia. There are many beach establishments where you can rent a beach umbrella with beach loungers. The distinctive trait is the beach hut that is bigger than the standard ones and has a sort of patio too. A good idea to spend a day off from visiting Venice.

Lido is not the only one beach in Veneto. Along the regional coast going eastwards you will find: Jesolo, Caorle and Bibione.

Jesolo has a 15km long beach. The first beach establishment was opened at the end of the 19th century. 30 minutes drive from Jesolo you will bump into Caorle, whose beach is divided into ‘spiaggia di Ponente’ (1.2 km) and ‘spiaggia di Levante’ (1.7 km). The length of Caorle’s beach reaches 15 km including the suburbs of Porto Santa Margherita, Lido Altanea and Duna Verde. Caorle’s sand derives from the Dolomites’ rocks, while the sand in Bibione is generated by Tagliamento river. Sandy beaches rich in beach establishments and services for all kind of needs. Bibione offers medical aid, lifeguard, kid changing rooms with water and changing tables, access to disabled people and a customer care office directly on its beach.

Romagna – the eastern part of the region – is the wonderland of the beach and suntan lovers. The coast is jam-packed of beach establishments. Rimini, Riccione, Cattolica and Cesenatico are only some of the most famous Adriatic beach resorts. The sea is not great here, but the abundance of services (pools, water slides, gym, massages, sports lessons and so on) made these towns the Italy’s top beach resorts. Moreover discos, clubs and beach bars are uncountable and it’s a little bit like being in Ibiza.

If you like more relaxing sites with less crowd, Le Marche is the ideal place for you. The coast goes from Gabicce to San Benedetto del Tronto with as much beach establishments as public beaches where you can sunbathe for free.

Pesaro, Fano, Senigallia and Civitanova Marche are only some of the Adriatic beach resorts along Le Marche’s coast. They all have sandy beaches, bars and restaurants are along both sides of the waterfront. If you prefer pebbly beaches reach the area near Conero Mount. Enchanting, wild beaches with crystal clear water are waiting for you in Numana and Sirolo.

This region is famous for its high mountains where you can ski or hike and for its national parks, for that reason Abruzzo is called the Europe’s green lung. The coast has to be included in the places to see in Abruzzo too. Especially the stretch called Costa dei Trabocchi. Trabocchi are wooden pile-dwelling buildings used by fishermen to fish. The fishing net is attached to poles and fisherman moves the net up and down by pulling ropes and using hoists. It’s an old tradition that is still alive and protected by the inhabitants.

Does the Molise exist? It’s just a joke about this very little Italian region that has to offer much more than we (the Italians too!) already knew about it. In Petacciato there is the beach of Campomarino, on which a long pinewood stretches. At the end of this beach close to the Sacciano creek, you will find a natural area with birds and plants to admire.

Puglia… I need to add anything else? This last region along the Adriatic coast has too much beaches to be mentioned but I would like to recommend you some of them.

In northern Puglia you have the Gargano area. Here beaches are very different. On the northern side of the promontory beaches are flat and sandy. You can go to Vieste, Peschici and Rodi Garganico. I have been to Peschici and it is very lovely. On the southern side the coast becomes rocky and the beaches are pebbly. Don’t miss Baia delle Zagare or Mattinata. In front of the Gargano mount there are the Tremiti islands that you can reach only by boat.

Going southwards the countryside gest flatter, but along the coast there are cliffs protecting pebbly beaches. Passing Polignano a Mare the beaches become like a paradise, that let you recognize you are in the Salento area where the sea is turquoise. It seems you are not in Italy. Torre dell’Orso, Ostuni, Bisceglie and Lecce are only some of the beach resorts.

Are you planning your beach holiday along the Adriatic coast? If you need help, contact us!

60 Replies to “The best beaches on Italy’s Adriatic coast”