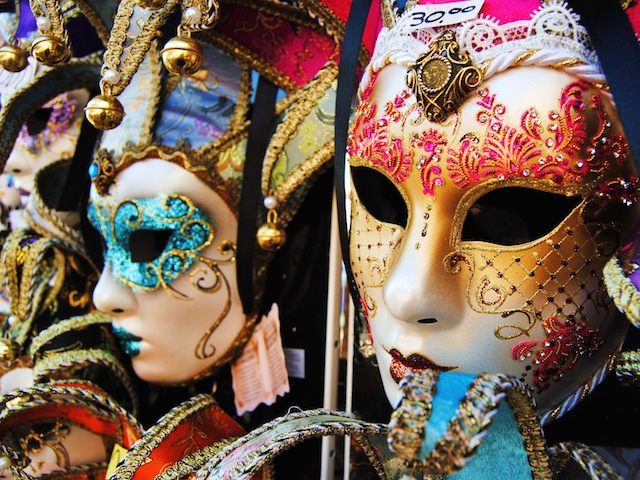 Carnival is quite an important period in Italy because it traces back to ancient time.

In the past, Carnival time meant a moment in which government stopped to rule: the chaos replaced the order.

For example, I can mention the Romans and their celebration in honour of goddess Iside, during this time some masked groups of people went around. Besides a man dressed with goatskins representing the old year was hitted by other persons.

Going ahead until 15th and 16th centuries, in Florence the Medici family organized big celebrations with floats called ‘trionfi‘ to the tune of Carnival songs written also by Lorenzo the Magnificient.

Carnival word derives from Latin ‘carnem levare‘ (to remove the meat). The word referred to the banquet holding on ‘martedì grasso‘ (Mardi Gras), the last day of the Carnival, and it was the last moment to eat in abundance before the fast of Lent.

Carnival time doesn’t finish in the same day throughout Italy, but in some places it goes on until the Sunday after Ash Wednesday.

Mardi Gras is often celebrated with a bonfire, that is the Carnival death.

Actually, the typical masks are others. They come out from the past. I am talking about the characters of the famous Commedia dell’Arte.

From the iconographic sources, we discovered that in the Italian Comedy performances there were some typical masks: i.e. Pantalone, Colombina, Balanzone or Pulcinella.

As Carnevale is a typical Italian celebration, wherever you go you will find some parties. On Italian Storytellers we already wrote about celebrations in Aosta Valley, Lombardy, Piedmont and Apulia.

However if you want to choose among the most traditional Carnival celebrations, here you are the best places to celebrate Carnival in Italy:

Of course the world-famous Italian Carnival. Italian people think that during Carnival days Venice is too crowded, in addition to this it is a high-season period and the hotel prices considerably increase. Nevertheless once in a life it’s worth a visit.

Concetta already talked about it. Putignano Carnival is one of the oldest Carnival in Europe. The preparation of the marvellous majestic floats lasts for months and it is not possible to watch it.

The first Carnival parade took place in 1873. It was an idea of a group of young people. The floats appeared at the end of 19th century and thanks to this celebration it started to use papier-mâché for the floats.

Besides the many traditional Carnival celebrations in Piedmont, there is one helded in Ivrea. It dates back to the Medieval time when the town turned against the baron that let starved the inhabitants.

This happened thanks to the rebellion of the miller’s daughter. The Ivrea Carnival is so important that it was recognized as Italian event with international importance by the Italian government. The peculiarity consists of the orange battle that represents population fighting against feudatory.

The most ancient Italian Carnival is celebrated in Fano, in the province of Pesaro-Urbino: in 1347 a document describes the Carnival time in Fano.

In 1872 it was created a committee to organize the whole event. The peculiarity is the ‘throw’, that is the fall of quintals of chocolates and candies from the floats.

The protagonists are the bear, the hermit and the Lent. The bear represents prosperity, fortune and success. The hermit symbolizes the poverty and the penury.

The Lent is always performed by women and it walks solemnly. Satriano Carnival is one of the most striking and mysterious Carnival event in the Basilicata region.

There are 2 masks: ‘Mamuthones‘ and ‘Issohadores‘.

All together they repeat a thousand-year old dance to evoke ancient rituals.

The most ancient Carnival in the Sicily region.

Peppe ‘Nnappa is the symbol of the Carnival, that starts and ends with him. Peppe ‘Nnappa has the key of the town and the parade begins when he hands out sausages, wine and candies for children.

This is the list of the most important Carnival events in Italy.

Some of the Italian parades don’t stop on Mardi Gras, but there are some places with events after this day such as Poggio Mirteto in Lazio region.

One Reply to “Have fun during Carnival”