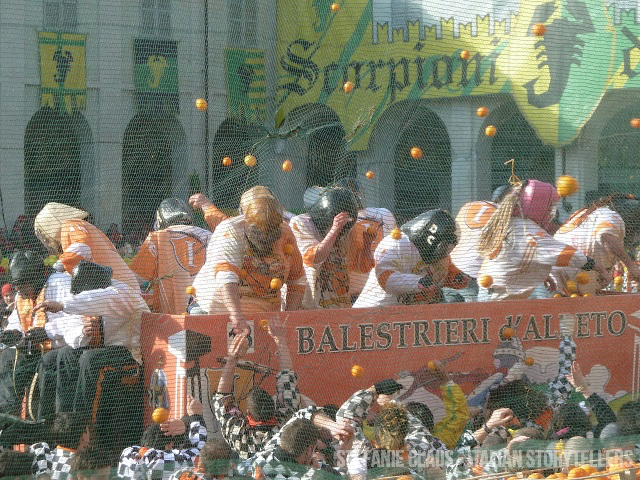 The Carnival of Ivrea, between history and oranges.

A very unique Carnival well worth a visit is the Historical Carnival of Ivrea, a town in Piedmont. Don’t worry about a costume, though, but make sure to wear your Phrygian hat and a pair of rubber boots.

The town of Ivrea is situated at the northern rim of the Padan Plain, between Turin and Aosta Valley.

It is originally a Roman settlement found 100 BC as Eporedia at the river bank of Dora Baltea river. It used to be the last safe place for merchants and armies on the way to Gaul (before the Celtic tribe of Salasser had been defeated by the Romans) or for travellers across the Alps via the high Alpine passes of St. Bernard.

Before becoming part of the Savoy kingdom in 1356 the area had been seeing many conflicts.

The old Ivrea with its castle, cathedral and bishops palace is situated on a hill that is worth the walk because you have a great view onto the landscape surrounding the town.

The current town centre is marked by narrow alleys. You will find town life centring today around streets Via Palestro and Via Arduino.

Historical roots of the Carnival of Ivrea

If you think Carnival is merely a children’s event or just another occasion to dress up in silly costumes, reconsider.

The Storico Carnevale di Ivrea commemorates a historical uprising and protest against a tyrant.

By celebrating Carnival every February anew, legend, memory and tradition have been kept alive over generations and developed further.

Legend has it that in the 12th century a daughter of a mugnaia (i.e. miller) refused to grant the feudal lord of the time the so called jus primae noctis, a misogynous custom from Europe’s Middle Ages.

The miller is said to have beheaded her oppressor instead, an act that supposedly gave the signal of a popular revolt and turned the miller into its symbol.

The historical grain of truth could have been an uprising of the countless millers living and working along Dora Baltea river against a new flour tax.

Battle of the Oranges

The Battle of the oranges is a Carnival ritual in Ivrea already since 1830.

Why do the people throw around tons of food, you might wonder.

One explanation is that the feudal tyrant had handed out beans to people, which they threw away as a sign of their contempt. The oranges became part of the Carnival celebrations only in the 1930’s, though.

One explanation is that during Carnival young girls tried to attract the attention of the men on the carriages by throwing oranges at them.

In another explanation the oranges symbolise the testicles of the tyrant…

Fact is, the Battle of the oranges is an essential part of the Carnival at Ivrea today.

How to celebrate the Carnival of Ivrea correctly (and safely)

Ivrea’s Historic carnival combines elements of rebellion and liberation of tyranny and has been celebrated in 1808 for the 1st time. Over the years of celebration a rich ceremonial has developed, which keeps the town and its visitors captivated for 10 days each February.

There are 5 easy rules to celebrate and finish the Carnival successfully. Success during Carnival in Ivrea means to eat codfish and polenta on Ash Wednesday.

You find everything you may want to ask on the comprehensive website of the Historical Carnival of Ivrea.