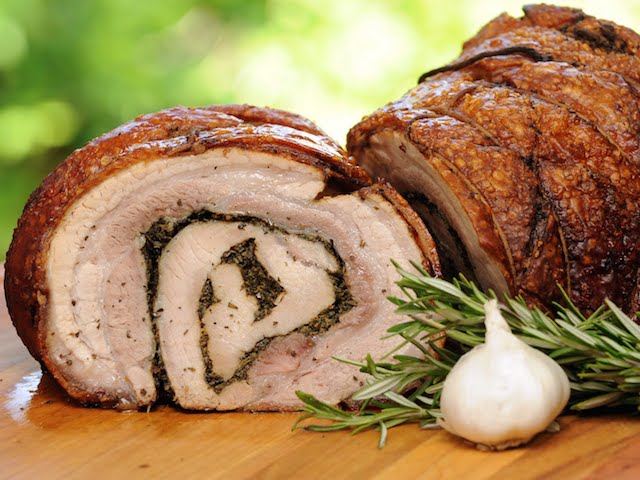 A poor kitchen putting together products from the earth. The result is the food and wine of Lazio

In Lazio, unlike other Italian regions, the local cuisine reflects centuries of country flavours and ingredients: a poor cuisine prepared by what was available from earth and animals, often rustled up. It’s in Lazio, in fact, that ‘Quinto Quarto‘ has spread: a particular cut of meat that collects all the less valuable parts of the animal. Why is like so? Because haute cuisine in Lazio has always been a privilege of the clergy, who never allowed to spread it into the homes of the middle class.

A dish that has ancient origins in time is ‘porchetta‘, a true symbol of Lazio’s cuisine, which should not be confused with the adjective ‘in porchetta‘ which is tipycal of other regions of central Italy and represents a type of filling which is also used for fish.

Another specialty that has been handed down for centuries is the fava bean, a plant so appreciated by the noble Roman family of Fabi, which it seems they have been the ones to give it that name (from “faba”). It’s a tradition to eat it along with Pecorino cheese on 1st May, the International workers’ day.

Abbacchio Lamb has also ancient origins. It was the typical dish for the feast of the shepherds. Nowadays it is cooked especially at ‘Scottadito‘ way (means something like “burn fingers”): the ribs are seasoned with salt and pepper, well-oiled, grilled or barbecued and served still very hot.

A specialty is the ‘guanciale‘, the cheek of the pig, which its always, and always had been, used instead of bacon, as well as the Pecorino Romano cheese is always used instead of Parmigiano cheese.

You can not forget the regional pasta dishes: Carbonara spaghetti and Amatriciana bucatini. The first is a typical dish, originally from Amatrice, which is made by eggs and bacon and the second one with tomato sauce, onion and bacon. All rigorously sprinkled by pecorino romano. Other very diffused pasta dishes are Spaghetti with garlic, oil and chili peppers, and the ‘Cheese and pepper‘, with plenty of Pecorino cheese, black pepper and no added oil, but only a little cooking water used to turn those 2 ingredients into a sauce.

Another typical dish is ‘pajata‘, which is the first part of the small intestine of veal, steer, lamb or goat, stewed and roasted, grilled or prepared in various other ways: the most delicious preparations are those based on dairy animals for their creamy internal.

Among the dishes there are some strong flavours and spicy as the ‘garofolato‘, a portion of round steak – but if you prefer also with other animals – cooked with an abundance of cloves.

Are you ready to eat in Lazio?