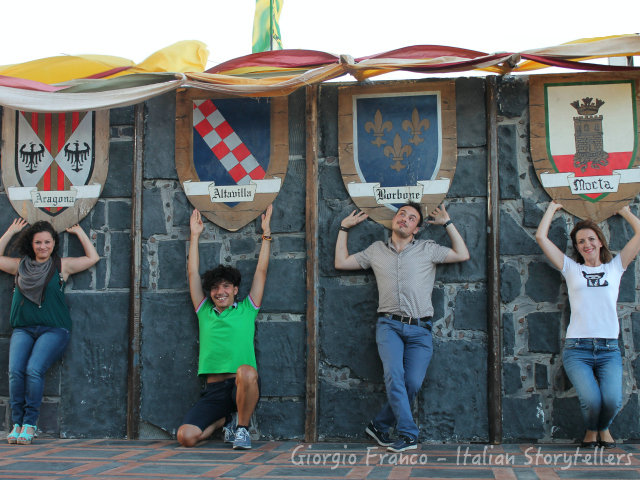 Tournaments and jousting over time have become essential elements of the spectacular feast time that occurs in the life of every community, with its reach to break the routine and the consolidation of the civic body through the ritual.

The origin of this practice was, however, nothing more than a requirement of the nobility to train for war during the winter, when the military campaigns and hunting were suspended. It was later, as of the end of the 11th century, that this exercise took on the ways and the glories of the show, under the impulse of a world – the feudalism – at dusk, which tied its supremacy and raison d’être, to arms and to the ground.

It is precisely at a time when new social realities emerged more dynamic, able, therefore, to undermine the existing order (e.g. the merchant class, cummunal classes, the growing authority of the centralized national monarchies), which is placed the ‘singing swan’ of the world of chivalry, such as with the courtly romances and the establishment of the tournaments as shows. The irrelevance of such self-aggrandizement nostalgic, subtracts the nobility here and now of history to deliver it directly to the imaginary fantastic and timeless people.

On the other hand, a vast and varied audience quickly proved receptive to these demonstrations pseudo-martial, so that the tournament took on an increasingly spectacular and at the same time ritual (complete with ceremonial), and were, therefore, organized to celebrate victories, but also occurrences of other, even religious festivals.

This intertwining of historical re-enactment, entertainment, worship and celebration under the auspices of the magnification power of a costume was particularly in vogue at the Norman rulers of southern Italy and Sicily, careful to recreate, as we remember the medievalist S. Tramontana, ‘the atmosphere of the grand and magnificent representation, curated by a strict etiquette, to an official event‘ (L’effimero nella Sicilia normanna, Palermo, Sellerio, 1984).

Through these emotions I grasped the meaning of medieval feasts, with the researcher of Classical philology and mediaevalist Eros Reale.

It seems that the Normans loved to give a display of opulence of their courts by riding in parades on royal occasions (an example of this, the two rides in the streets of Palermo on the occasion of the coronation of Roger II). And it is under the name of “Ride” that has been passed down over the centuries, in the Sicilian town of Piazza Armerina, the horse race in honor of Our Lady of Victories, since 1952 “Palio of the Normans.”

In this “Parade” religious worship, historical re-enactment and legend come together, as the Madonna protector of the city is none other than the one depicted on the sacred flag or stake (from Lat. pallium, a cloth painting, it is thought, by St. Luke, and depicting the Virgin Mary with baby Jesus) donated by Pope Alexander II to Roger of Hauteville at the thirty-year (1061-91) ‘crusade’ liberation of Sicily from the yoke of the Saracens, which was attributed the victory of Normans.

After the war, Roger I gave the signum victoriae troops of Aleramici, placing them in the Saracen town of Iblâtasa Iblâtana or (most likely the Ibla Elatson or Elatton which we hear about the geographer Idrisi, corresponding to the ancient Ibla Geleate mezionata by Thucydides), Placia Platza or renamed (as a parade of the Norman militia).

Also another prodigious ‘liberation’ is the origin of the cult of the Virgin: the liberation from the ‘Black Death’ of 1348, thanks to the discovery of the banner labarum, that in 1161 the ‘Lombard’ (the Aleramicis) buried and thus afforded to destructive fury of King William I, known as the ‘Malo‘ (grandson of Roger I, ruled Sicily 1154-1166). It was the Blessed Virgin Mary, appeared in a dream to the priest John Candilia, to drive the inhabitants of Piazza Armerina to the fortified abbey on the hermitage of Santa Maria, which, discovered the sacred image of the Blessed Virgin Mary of Victories, reported in the city (rebuilt in 1163, after destruction at the hands of Malo, on the slopes of the hill Armerino) and were freed from the plague.

As a result of these facts, then, between history and legend, on the occasion of the celebrations in honor of the patron saint of the city, was founded the Palio dei Normanni of Piazza Armerina.

It’s also in conjunction with the celebration of the patron saint of Motta Santa Anastasia, which takes place a massive carousel, in turn prominent feature of the island’s most popular medieval festivals. Unlike the Palio of the Normans, the festivities are not tied to a re-enactment of a specific historical event, or at least at first glance: musicians, artists, the famous flag-wavers, dancers, acrobats engage the customers, so as to facilitate the journey in the charm and magic of the middle Ages.

However, at the top, the tower basaltic oversees and supervises the party, and his evidence alone adds to the pleasant atmosphere of medieval reenactment. This tower, in fact, was the work of the same Roger I we met in the first leg of our trip. This leader was never able to surpass the wonders that Frederick II had left in Sicily. The magnificence of Frederick is presented as interlocutors between antiquity to the Middle Age. Just think of the castles of Catania, Castelvetrano, Augusta, Milazzo, Siracusa and Lentini. In this final stage the event Stupor Mundi takes place.

The joy of living continues in a land of colors and backing vocals: nothing perishes. Why all this already belongs to the order of eternity.