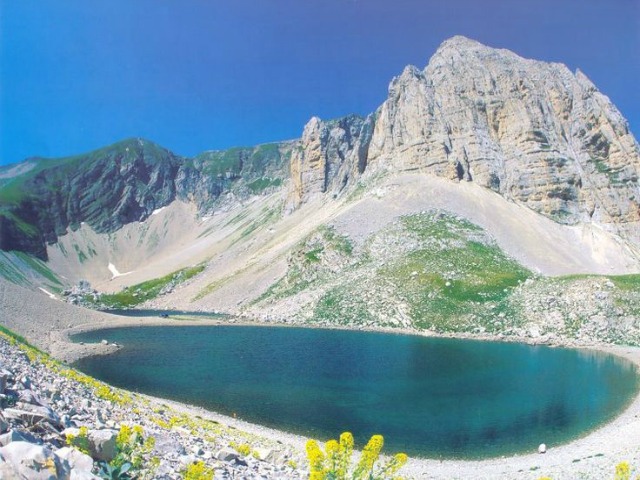 A surprising mix of legends, sports and a luxuriant nature.

Land of myths and suggestions, the Sibillini Mountains owe their name to the priestess Sibilla, who was able to predict the future and lived in a stone grotto only reachable by foot, considered the entry to her underground world.

Necromancers and knights from all over Europe went there to consult her oracle and listen the previsions, but if they tried to discover her secret retreat she cast spells on them!

The Monti Sibillini National Park, dominated by Mount Vettore (2,476 mt), has been established in 1993; it extends for about 70.000 hectares between Umbria and Marche and it’s richly scattered with churches and abbeys, medieval hamlets, fortified towns with towers and a spectacular, uncontaminated nature.

The summit of the mountain chain was deeply modelled by glaciers during the Quaternary period, that have also created enchanting glacial lakes, just like the Pilato one: it’s so called because, according to the legend, after the sentence of death decided by the Emperor Tiberio, the body of Ponzio Pilato turned up on its banks.

The way to the lake is a little bit hard, but all your strain disappears when you arrive in front of this transparent and shining sweep, one of the little Alpine glacial lakes on the Apennines; you can choose among 3 possible paths: from Foce of Montemonaco or Forca di Presta in Marche region, or from Capanna Ghezzi in Umbria – the simplest one.

On the western side there’s the enchanting Valnerina, but also a magnificent karst depression that gives life to a series of plains called Pian Grande, Pian Piccolo and Pian Perduto; they composed a plateau known as the Piani di Castelluccio, a place you absolutely can’t miss: the little hamlet is situated on the top of an hill, and dominates the plane below, scene of the breath-taking ‘Fioritura‘ (i.e. Blossoming). Every year, between late May and early July, the flowers in the plateau bloom and it’s an explosion of colors that blend from red to white, from yellow to violet… no words can describe the marvel that nature creates there, I wish you to admire it with your own eyes!

The Park is also rich in fauna and flora’s species: it’s covered with extended forests and cherish about 2,000 varieties of flowers, including the Apennine Edelweiss and the Alpine Anemone; among the typical animals there is the protected meadow viper and the Marchesoni, a small red crustacean that lives in the Pilato Lake: it is a unique specie in the world, and this is the reason why you can’t go near the banks of the lake, where they put down egg cells.

Sports and other outdoor activities

Open all the year round, the park offers various opportunities: Museum-Visitor Centers to discover all the characteristics of the territory, Park Houses for the entertainment activities and, above all, a lot of trails for all tastes! Wanna bet?

Would you ask for more? Let’s have a look here and discover all the surprising opportunities given by the Sibillini Mountains National Park!