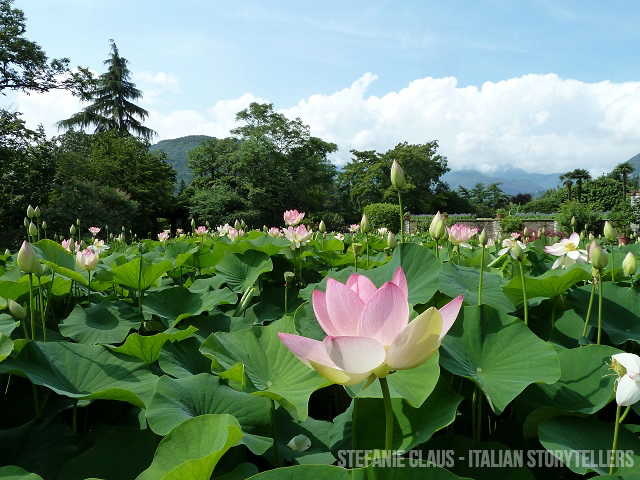 With its mild microclimate Lake Maggiore is a garden and flower lovers paradise. Camellias, azaleas, rhododendron and magnolias abundantly pepper the lake’s shores and colour gardens and paths all year long. In spring the famous botanic gardens open the gates to the public again. Let’s share the colourful plenty in the splendid gardens on the lake shore framed by high, snow-covered mountain tops.

The area of the pre-Alpine lakes (Lake Como and Lago Maggiore) in the north of Italy, also called Insubria, named after the Celtic tribe of the Insubres dwelling in the Milan area in the 4th to 5th century BC, is marked by a very mild ‘Insubrian‘ climate with dry and sunny winters and extensive rainfalls during spring and autumn. The lakes balance the temperatures thus creating the perfect conditions for an abundant vegetation. But don’t worry, the amount of precipitation is not higher than elsewhere: it doesn’t rain more often, but much more intense!

The Borromean Islands, called after their former owner Count Carlo Borromeo, once governor of the Lake Maggiore region, commissioned the garden on Isola Bella, named after his wife, in 1632. All the soil necessary to turn the rocky island into a garden was brought from the mainland. It took 40 years to be completed. From the lakeside it resembles a wedding cake with its layers, statues and columns being candles.

Visitors enter the garden after visiting the Borromeo palace, once home to the Borromeo family. One room (and bed) commemorate Napoleon’s stay on the island. The baroque garden with its water theatre is crowned by a unicorn, the symbol of Borromeo power. The garden’s exaggerated, colossal scenery leaves no doubt that the Borromeo knew how to celebrate in style and live with grandezza.

The botanical garden on Isola Madre, initially found as an orchard, later been turned into an olive garden and garden for agrumes, took today’s shape as an English garden in the 19th century. The garden prides itself for its rare plants and trees from all over the world including the stunning 200-year-old Himalayan cedar in front of the Borromeo palace. Peacocks roam the island freely adding to its romantic appeal. The beautiful palace is a fully furnished holiday residence from the Renaissance including a puppetry from the 18th century. A must-visit for lovers of time-travel.

The Gardens of Villa Taranto in Verbania

As the strip of land reminded him of his native Scotland captain, Neil McEacharn decided to create an English garden on the land that he had bought from the marquise of Sant’Elia. Later in his life he devoted himself to his greatest passions: botany and gardening. His other passion complemented these first two beautifully: from every journey he returned with new plant treasures that found a new home in his garden. The garden grew with new acquisitions of land into a park 16 hectares large. In 1938 McEacharn donated his park to the Italian state. The Gardens of Villa Taranto (Giardini Botanici di Villa Taranto) contain more than 20,000 plant species, 1,000 of which had never been grown in Italy before. Highlights include the terraced gardens, the lotus flower ponds, the tropical plants glasshouses and flamboyant plants such as Davidia involucrate or Handkerchief tree.

Villa Giulia in Verbania and its exhibitions

Take the cable car up to Mt. Mottarone, landmark mountain and ski resort above Stresa, from Carciano (between Baveno and Stresa), to reach the Alpine garden of Alpinia at 800 metres with its varied, large collection of Alpine plants, including rare trees and shrubs. The panoramic view onto the lake and its surrounding mountains and valleys is magnificent.