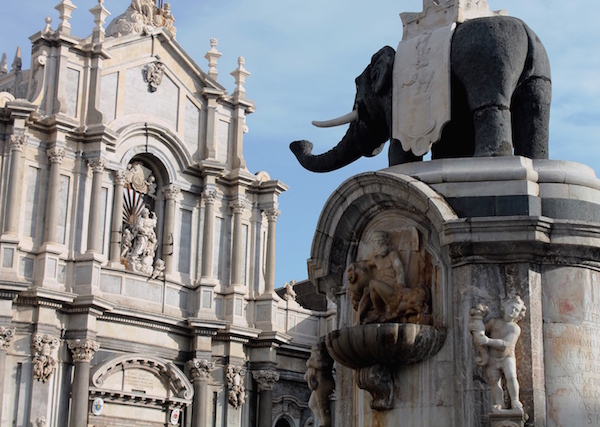 If you follow Italian Storytellers’ blog you already know that at the end of February we were involved in the MUST project, a European project promoting accessible tourism of Unesco sites in Sicily. It was a fascinating experience for me because I can understand deeply the needs of disabled people and how much a destination has to do to welcome these groups of people.

Our participation was connected with testing a 4-day itinerary in the eastern part of Sicily. As it was a great experience we have a special gift for you. At the end of our story on 15th April we will give you the itinerary to download with all the info you need to arrange the same itinerary among Unesco sites in Sicily.

Hereafter you will find the two stages for the first day of the tour. Let’s start!

The whole province of Catania is dominated by Mount Etna, the most majestic active volcano in Europe, the highest mountain in Sicily. Etna was the first stop-over of our guided tour, led by tourist guide Ivan Nicosia. Indeed, the people of Catania love and hate Etna, allowing everyone to visit the volcano.

The lava of the Mount Etna is present just about everywhere, in the city and the villages, on the cliffs and on the hills, on the church facades, also lying alongside the road. The colour of the lava is dominant and even the local products take on this colour: cauliflowers and ‘tarocchi‘ (a variety of oranges).

Living with the volcano is now almost part of the generic make-up of the people from Catania.

Etna is not a mountain isolated by its height of over 3,300 metres (12,400 feet). It is not a volcano that makes its presence felt only when in full eruption. Everybody here (from Giarre to Bronte, from Randazzo to Misterbianco) is accustomed to wiping the black sand of the Mount Etna from their cars, doing the washing again because the clothes hung out to dry have been stained with the black ash, picking up a hammer and chisel to break up the mixture of rain and volcanic debris that has solidified on the balcony.

There is a certain amount of fatalism in all of this. An ancient fatalism that has often gone hand in hand with faith, superstition, myth and legend. What can be done against the unbridled forces of nature?

Today scientists keep a watchful eye on the Mount Etna and are able to foresee activity, both great and small. Today technicians have the means at their disposal to try to divert the direction of lava flows. Yet, now as in the past, people invoke patron Saints to protect the towns from the lava and the eruptions. While scientists busy themselves with lasers and highly sophisticated equipment, people continue to carry relics and simulacrums in procession to defeat the beloved-detested mountain of fire.

So every town has its heavenly champion in the fight against Etna. In Fornazzo the heavy responsibility lies in the Sacred Heart of Jesus, in Nicolosi in Saint Anthony, in Catania in the veil of Saint Agatha.

However, like all important natural phenomena, over the centuries Etna has not only aroused all kinds of emotion in the population, generating fear, veneration, amazement, legends. It has also aroused the interest of scientist and researchers of travellers (especially in the Romanic period) fascinated by its beauty and its terrible majesty that has inspired poets and writers, such as Hesiod, Pindar, Virgil and Dante.

The name of the volcano comes from the Phoenician ‘attano’ (furnace) or the Greek ‘aitho’ (burning) to which is also connected the Latin ‘Aetna‘. The Arabs called it ‘Gibel Utlamat‘, in other words “mountain of fire”; some sources, dating back to around 1000, already use the name ‘Mons Gibel‘, then changed into ‘Mongibello‘ (Dante, in the 1200s, also used this name in the 5th canto of the Hell).

Do you know there are two volcanoes in Naples?

What to see in the south-eastern Sicily?

Catania, at the foot of the Mount Etna

Leaving the Mount Etna, we continued downwards to reach Catania, the capital of molten architecture.

The Italian cities that boast a lively social life, like that of Catania, are a few. I don’t mean only the enlivened local fish market or the nightlife, but also the cultural signs which have transformed it in the last decades.

If you will be in Catania, what you will have in front of you is a 18th century reconstruction with palaces made of white limestone (become black due to the lava), the lavish Baroque churches, the long and straight roads which run from the sea to the volcano.

As usual every tour in Catania starts from Piazza del Duomo and particularly from the 18th century Elephant fountain, the centre of the square where since centuries the religious power has been setting against the civil one, but also one of the main places of the Baroque transformation started just after the earthquake happened on 9th and 11th January 1693. The Elephant is much more than a symbol for Catania. Its dialect name is “u liotru“, probably due to the legend which wants the byzantine magician Eliodoro riding it. The marble fountain was realised in 1736 by the architect Giovan Battista Vaccarini coming from Palermo. He is one of those who were in charge of the construction after the earthquake.

Close to the Saint Agatha Cathedral there is the Porta Uzeda, in honour of the Spanish viceroy Francesco Paceco, Uzeda’s Duke and the patron of the reconstruction.

On the south-western part of Piazza Duomo you will find the fountain of the Amenano, built in the 1800s by Tito Angelini. Catania’s inhabitants use to call it “acqua o linzolu” (i.e. water as a bed sheet) due to the extraordinary effect that the cantilevers made of Carrara’s white marble.

Connected with the reconstruction of the city is Via Crociferi, that earned to the city the first nominee for the Unesco World Heritage. It is the feather in its cap. You can reach the street walking backwards along Via Vittorio Emanuele and taking the third street on your right.

During our tour we didn’t have enough time to visit the entire city centre, but Catania offers uncountable masterpieces to visit and maybe once I will talk about them. For example San Nicolò l’Arena monastery, where the first Greek acropolis arose: today San Nicolò‘s Church rises up here and it represents an incomplete gigantic work. Next to it on its left side there is the Monastery, seat of the University.

Another place not to be missed is Piazza Stesicoro, seat of the monument to Bellini, the famous composer of Catania, and the palaces, but also the remains of the Roman amphitheatre and the church of the Agatha’s martyrdom, patron saint of the city.

I’m Sicilian. I’m a graduate student in Archaeology and passionate about everything related to Cultural Heritage. I like to know off the beaten path places. I create pottery items and I love to visit artisans’ workshops.