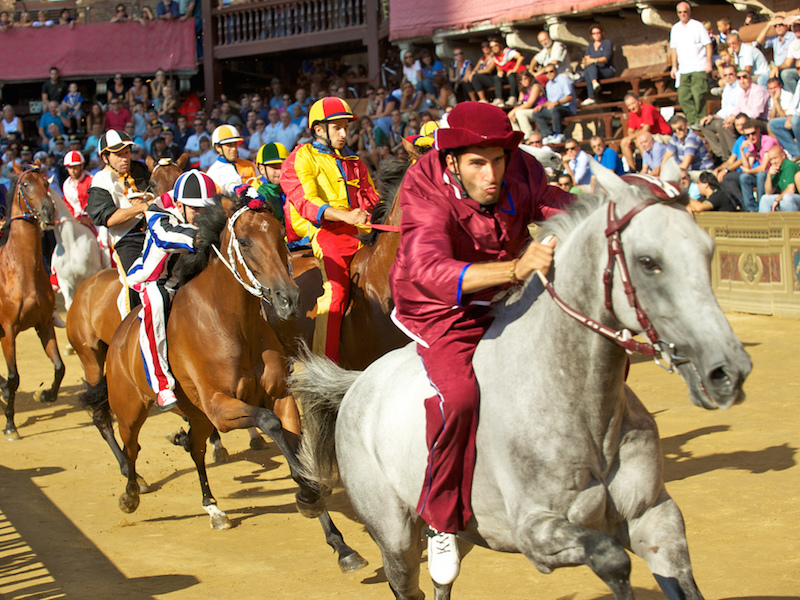 What stands behind the Palio di Siena race?

It’s summer and it’s very hot, but nothing can stop the Palio di Siena race.

Describing what the Palio race means for the city of Siena is pretty hard. It is something that flows in the Senesi‘s veins. People of Siena come into the world feeling already the sense of rivalry with the opposed contrade. A contrada is a section in which the city of Siena is divided. The life of a Senese turns around the Palio and the preparing of this race marks the seasons.

When I have been in Siena, that is one of the Unesco sites in central Italy, I have asked all the curiosities about the Palio di Siena race because I’d like to share with you what the Palio means for the city of Siena to understand what stands behind this historical event.

Many people are against the race because of the abuse of the horses (they are doped!), moreover many horses died during the race or broke their legs. A group of people claimed to picket against the Palio, but the contradaioli were ready to kick the people out. Probably you consider the event cruel now. You can believe it, but I suggest you to not saying something like this to the locals.

The origin of the Palio di Siena

Palio di Siena is a horse race dating back to the 13th century.

At that time the Palio represented the final event of the celebrations in honour of Maria Vergine Assunta, patron saint of the town and the race was on a path going from outside the wall to the Cathedral. The today’s rules of the Palio were established during the 17th century as well as customs and habits related to the horse race. But only on 16th May 1721 Siena had its definitive regulation.

During the Renaissance the nobles stopped to race leaving their role to the jockeys. Palio di Siena became a show to watch, a symbol of the city’s political power.

After the downfall of the Siena’s Republic (1559), the race and all the celebrations connected with it lost their politcal meaning. Gradually the Palio horse race was moved to Piazza del Campo, the most famous square of the city, where it still takes place.

The facts about the Palio di Siena

Palio di Siena is run right in Piazza del Campo on 2nd July and on 16th August. The first one is called Palio di Maria di Provenzano and the second one Palio dell’Assunta.

And here below they are the facts of Palio di Siena. Have fun!