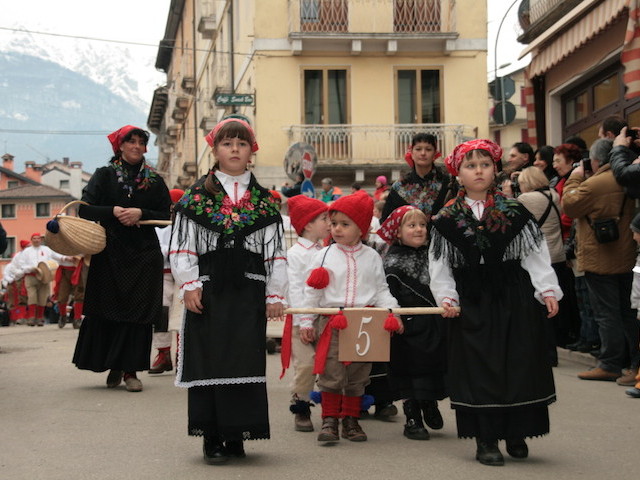 Have you ever called March? In Recoaro it is possible

Fora Febraro is not the only tradition in High Veneto to celebrate the end of the winter. In the same zone of Vicenza Province the Call of March takes place every 2 years.

Recoaro is a little village at the end of the Agno Valley in North-Western Veneto. In the past Recoaro was famous for its water, that has very wealthy features. The kings and queens of Italy were used to spend a part of Summer there because of the very good climate and thermae.

At that time the village was a little pearl made of Art Déco buildings and little houses full of important people, writers, nobles, lovers of good life, panorama and food. Now Recoaro is quite different, but its old style aspect is still alive and wonderful.

‘Chiamata di Marzo‘ (Call of March) is a very special moment for this village.

It consists in a sort of parade of people descending from mountains, celebrating the spring that is coming. In the past that kind of parade was not fictional but real: many people spent months blocked on the mountains waiting for the snow to melt.

Call of March is now a theatrical moment that celebrates an ancient tradition. The 2014 edition will take place on 23rd of February, from the early afternoon till late.

It is so nice watching the past flowing in front of your eyes. People interpret many different roles such as local cowboys, cheesemakers, farmers and other similar parts. The Call of March is an explosion of colours, tastes, sounds and smells. It is the best opportunity to get in touch with the real culture of this part of Veneto.

The day of the parade closes with a very big bonfire on the main square of Recoaro. It is the symbol that tells anybody the winter is finally over.