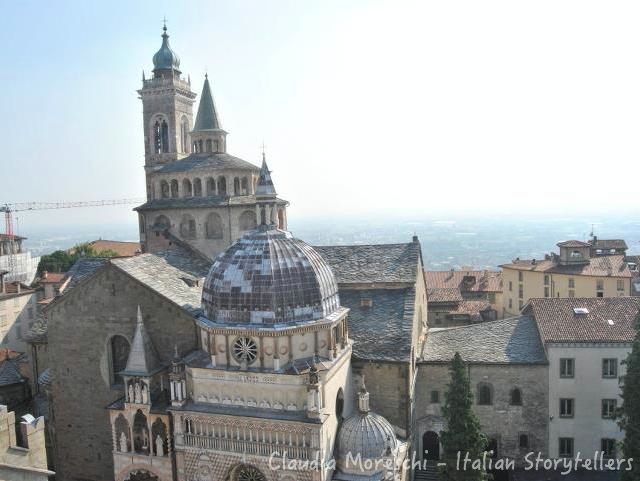 Medieval fortified city suspended in time and non-touristy places yet to be discovered: welcome to Bergamo.

In the latest years the city of Bergamo has been increasingly gaining popularity among tourists. This happened especially thanks to its airport, highly attended by low-cost airlines, that is among Italy’s busiest airports by passenger traffic.

Bergamo is indeed often associated with Milan – Orio al Serio airport, but, actually, it is much more than just an airport. 50 km from Milan and close to Lombardy’s lakes and mountains (that can be reached in about one-hour drive), Bergamo lies in a strategic position in the middle of Lombardy, close to the hills too.

Like many other famous cities (Rome, Istanbul, Moscow, Jerusalem), Bergamo lies at the foot of 7 hills. In addition it is the only Italian city included in a natural park: Parco dei Colli (i.e. Park of the Hills).

What’s peculiar about Bergamo is the distinction in 2 city areas:

Start of the visit: the Lower City

Our visit of Bergamo ideally starts from the railway station, in the Lower City, easily reachable with the bus (line number 1) from the airport. Just outside the station you find yourself in Viale Papa Giovanni XXIII, the main city boulevard that directly takes you to the Upper City.

You can go on foot to Sentierone, the XVIII century avenue, where once the St. Alexander Fair were held. Stop for a coffee in one of the historic cafès. In front of you there is Donizetti Theatre (the famous composer Donizetti was born in Bergamo) and interesting buildings, such as the Propylaea and the Church of St. Bartholomew.

Are you a shopaholic? You’re in the right place. Take a look at the several shops between Via Tasso, Via XX Settembre and Via Sant’Alessandro.

Take again bus number 1 and go straight to the Upper Town, the medieval old town on the hills surrounded by historic walls. Take your time to stroll along the old cobblestoned streets and enjoy the view on the lowland from the walls.

Ready to discover the jewel of the city? Reach Piazza Vecchia (i.e. Old Square), defined one of the most beautiful in Europe by famous architect Le Corbusier. In front of you there is the Angelo Maj Library, the medieval Palazzo della Ragione, the Campanone (the civic tower that is the symbol of the city), the Cathedral of Santa Maria Maggiore, the Baptistery and the Colleoni Chapel.

Not far from here is also the Donizetti Museum. But you have not seen enough.

Take the road uphill to the fortress. Its gardens offer one of the most beautiful views of the city skyline as well as of the mountains, the plains and the lower town.

Then go back in via Colleoni – the old Roman Cardo, the main street – and reach Cittadella and Colle Aperto for example. Along the way you can enjoy the view of food and local culinary delights shops, restaurants, bars and shops. In Colle Aperto you can take the scenic cable car and reach Colle di San Vigilio, the highest hill of the city.

Visit the ruins of the ancient castle, relax at the Belvedere (the best point is this), admire the lush green hills and forests that surround you.

One Reply to “Discovering Bergamo, much more than just an airport”