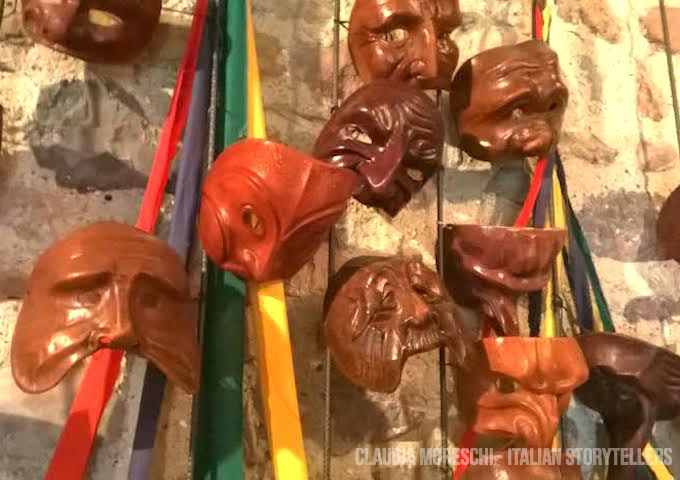 Last year we were in Bagolino for Carnival, but this year I will lead you to my town.

Harlequin is well-known all over the world for being one of the most important masks of the Italian Commedia dell’Arte – the form of theatre born in Italy during the 16th century in which masked ‘types’ are used – but hardly no one knows that Harlequin is from Lombardy. To be more precise from Bergamo.

In the small medieval village of Oneta, at the beginning of the Taleggio Valley, in strategic position along the ancient ‘Via Mercatorum’, the road of the merchants, there is a historic building that, according to local historians, was built by the family Grataroli, originally from Oneta but emigrated to Venice.

This building is said to be the house where Harlequin was born.

At that time the territory of Oneta, as well as the whole province of Bergamo, fell within the borders of the Republic of Venice.

According to tradition Harlequin – whose real name was Zanni, a variant of the name Gianni  – moved to Venice in search of fortune and settled down there working as a servant for the Venetian nobility.

That’s the reason why Harlequin is often associated with the Venetian Comedy of art (and considered from Venice).

‘Zanni‘ (from which the English word ‘zany’ comes from) became synonymous with astute servant and trickster and the name ‘Zanni‘ itself became indeed a common character type of Commedia dell’Arte.

The Harlequins’ House was restored between the ’80s and ’90s and is now a House-Museum dedicated to Harlequin and the masks of Commedia dell’Arte.

Its architecture is in solid stone, softened by porches, balconies and arched windows. Inside the Museum there are traces of frescoes and decorations both religious and historical and antique furnishings typical of the tradition.

The house is accessable by a beautiful stone staircase and overlooks the central square of the village, made up by a small group of old houses, well restored and with an age-old arch structure and a tiny old church.

Among paved stones, dark porches, rustic balconies and narrow streets, visiting Oneta is like taking a trip back in time.

On the back ot the Harlequin’s house there is a cozy restaurant, called Taverna di Arlecchino, created where once there were the stables of the house. The menu offers typical local dishes like casoncelli (a kind of stuffed pasta), polenta and different kind of meat, cold cuts and cakes with berries as well as a wide selection of wines.

The museum is open on weekends and on request on weekdays.

2 Replies to “A plunge into Commedia dell’Arte”