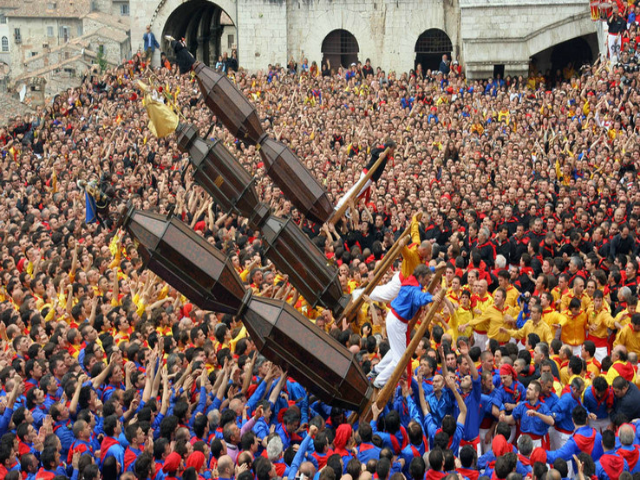 An exciting and passionate event leading you back in the charming atmosphere of the Middle Ages.

Gubbio is the oldest town in Umbria: an enchanting Medieval village situated on the top of an hill in the North – East of the region, rich in cultural and artistic heritage that lives in its traditions and folkloristic events.

Umbria is rich in recreation of historical events, festivals and other cultural appointments that bring us back to the past and let us breathe the fairy atmosphere of the Middle Ages, and even Gubbio has un unmissable event: the Corsa dei Ceri.

The Candles Race is the most stunning, extraordinary and crazy race  you could see. It takes place every 15th May, on St. Ubaldo’s Eve, in fact this tradition was born in the second half of the 12th century, when the Commune decided to celebrate a decisive triumph against some enemy towns by showing its gratitude to St. Ubaldo, who was the bishop of the city.

The fascinating procession of candles through the narrow alleys towards the Mount Ingino, where there’s the tomb of the Saint, is a secular event remained almost unaltereted for centuries, but with the flow of time the original candles have been replaced by 3 huge wooden structures.

These modern candles are 16 feet tall, realized with pine or fin wood and covered with a woven decorated by floral motifs, they have 3 prism containing the candles and on the top there are the statues of the Saints Ubaldo, Giorgio and Antonio, protectors of masons, merchants and farm workers, respectively.

You certainly have already seen the three Ceri, because they are also on the official banner and flag of Umbria Region!

The Ceraioli who carry the Ceri during the race wear typical costumes composed by white canvas trousers, a red scarf and a sash tied around their waist as a belt, and the color of their shirts depends on the Saint they represent: yellow for Sant’Ubaldo, blue for San Giorgio and black for Sant’Antonio.

According to the tradition only adult male inhabitants of Gubbio can be Ceraioli (except in particular situations, for example during the wars even women could do that), but there are two other minor races that take place in the following weeks: that of Ceri Mezzani for teenagers and that of Ceri Piccoli for kids.

On 15th May in the early morning the Captains are woken up by the drummers who walk through the alleys, and at 6 o’clock the Campanone (the big bell of Palazzo dei Consoli) rings for all the citizens.

At  9 o’clock the procession starts: the statues of the Saints are taken out the church and  placed on dedicated floats, to accompany them through the streets of Gubbio and reach Palazzo dei Consoli, where the three Candles are located, waiting for the race.

At 11.30 a.m. there is the most touching moment of the day, the Alzata (rising) of the Candles: in front of a joyous crowd, the candles are raised up and the statues are located upon them, the Ceraioli start the race by completing three rotations around the square and each candle continue its own itinerary.

At 6.00 p.m. the candles are raised on the shoulders and blessed, so the real race can finally start: it descends along via Dante, stop in Piazza della Signoria where they make three ‘birate’ and then continue their way towards the Basilica of Sant’Ubaldo, on the Mount Ingino.

The winner of the race is not the first to arrive, because departure and arrival dispositions of the candles are prearranged and they can’t be modified: the first one is that of Sant’Ubaldo, followed by San Giorgio and Sant’Antonio; so the winner is decided on the bases of the skills level proved by the bearers, after a long-term discussion of the inhabitants.

The race purpose is to make a good impression, in fact there are some unmovable rules that permit the success of the race: run as fast as possible, don’t overtake, try not to till or fall, respect the fixed stops.

Taking part in this event means you can touch the most intimate and passionate point of the eugubinian sense of belonging, and you will live an experience that you will never forget!