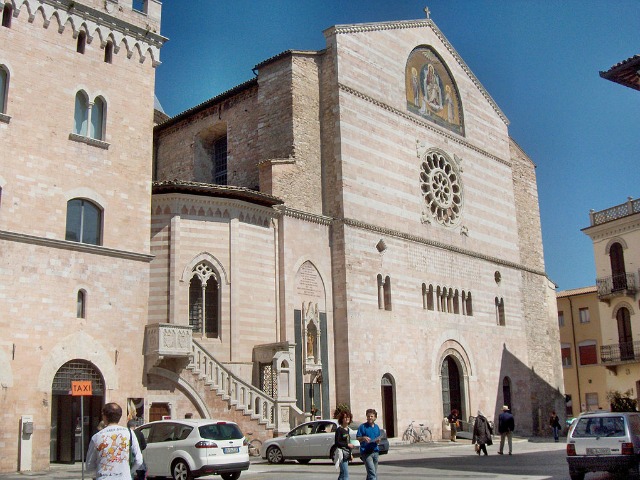 Let’s discover the most interesting places of Foligno

Foligno is the only Italian town that is going to house both arrival and departure of a Giro d’Italia stopover.

On 16th May the tour will leave Frosinone (Lazio) and it will arrive in Foligno at 5.30 p.m.: passing through Porta Todi, near the Canapè Park, it will reach Piazza San Domenico, location of the open village.

The next day, the race will leave Foligno at 12.30 a.m.: from Piazza della Repubblica, it will cross the old town center, going through Corso Cavour and Via Garibaldi, heading toward the further stage in Montecopiolo (Marche).

A little bit of history

Foligno is an ancient town situated in the east-central area of Umbria, in the province of Perugia, and it’s an important commercial center and a dynamic railroad junction.

It’s a town that differs from the other historic centers of the region because of its position in a plain, rather than on the hillside.

This territory, initially inhabited by Umbrians, was colonized by Romans that made it an important Umbrian base, thanks to the presence of the Topino river.

During the 13th century Foligno was under the Papal influence and it became a significant and dynamic cultural, politic and commercial center, but the real flourishing of the town started in the 14th century, when it was a well-travelled stopover along Via Flaminia, and also the most important Ghibelline stronghold in Umbria, under the powerful Trinci family.

What to see in Foligno?

The old city center of Foligno is easy to visit on foot, because it isn’t that big and all the most interesting attractions are located there.

Canapé Park is an ancient public garden dating from the 18th century, situated just inside the fortified walls of the Medieval town, between Porta Todi and Porta Romana.

From these gardens, you can easily reach Piazza San Domenico, with its centuries-old church of Santa Maria Infraportas: it’s one of the oldest religious building of the town and its name tells us that it was built outside the city walls, in the 11th century.

From there, you can go on along Via Mazzini to arrive at Piazza della Repubblica, the best place to discover the signs of the town history: the square composes a surprising architectural combination together with the Duomo, the Palazzo del Comune and Palazzo Trinci.

The Duomo is dedicated to San Feliciano, who is the patron saint of Foligno, and it’s a neoclassic-baroque-style church; outside, you can admire its beautiful façade, decorated with the signs of the Zodiac and the Evangelists, inside you can enjoy the Roscioli spouses’ busts by Canova, the Diocesan Museum and the San Feliciano’s crypt.

The Palazzo del Comune is a neoclassic building of the 13th century, and on its façade there’s the writing ‘SPQF’ that means “Senatus Populusque Fulginatensis” doesn’t it remind you of the famous Roman SPQR?

Beside this palace, there’s also a crenellated tower built in the 15th century.

Palazzo Trinci, so called because of the family who ruled the city until 1439, was finished in 1407 and it’s characterized by its beautiful neoclassic façade and the gotic courtyard with its loggias and a cross vaulted stairway; the inner rooms are decorated by frescoes representing an encyclopedia of cultural life of the 15th century.

It is also the location of the Archeological museum, that illustrates the Roman early settlement in this territory, and the beautiful Pinacoteca, that documents important Umbrian and Folignate artworks from the 14th to the 16th century.

You can continue your stroll along Via Garibaldi, the city’s main east-west axis, where you will find an interesting place to visit: the ex-church of Santissima Trinità in Annunziata is the location of the “Calamita Cosmica”, a controversial work realized by Gino De Dominicis, representing a 24-meter-long skeleton with a bird bill instead of the nose. This majestic and enigmatic sculpture has a gold rod on the middle finger of the right hand that seems pointed towards the stars to attract their energy like a magnet; it shows the author’s thought, because he was always looking for a state of immobility, facing the themes of immortality, death and disappearance.

In the neighborhood of Foligno there’s another beautiful place to see, the Sassovivo Abbey, founded in the second half of the 11th century by Benedictine monks, situated in an uncontaminated and relaxing natural landscape.

One of the most fascinating space of this abbey is the Romanic courtyard, with its refined mullioned loggia.