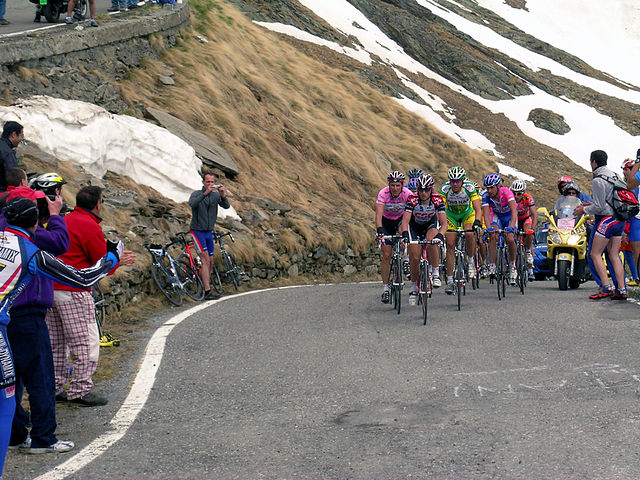 Follow the Giro d’italia climbing the mountains of Lombardy

Together with Tour de France and Vuelta a España, Giro d’Italia makes up the Grand Tour,  the 3 major professional cycling stage races in Europe.

Lombardy has always played an imporant role in the Giro d’Italia, since Milan is traditionally the final arrival of the race. The 2014 edition of the Giro d’Italia, that has been taking place since 1909, will instead finish in Trieste.

The bike race normally consist of 21 day-long segments (stages). The tour will be passing through Lombardy on 2 different stages (the 15th and the 16th), on Sunday 25th and Tuesday 27th May.

The Giro d’Italia is also known for its steep and difficult climbs. Traditionally the tour passes indeed through the Alps and the Dolomites, with the most difficult climbs right between Lombardy and nearby Trentino Alto Adige. Both the 15th and 16th stages are classified as mountain stages, with Plan di Montecampione (at 1,665 mt) and Val Martello (at 2,059 mt) as final arrivals.

On 25th May, after leaving Piedmont, the Giro d’Italia will enter Lombardy in the province of Varese, and will pass through Brianza, a wide area to the north of Milan, among the most productive in Europe. Brianza is located in the heart of the Italian ‘Lakes District’, close to lake Como. Its main town is Monza, a big centre of Roman origins, that experienced a period of remarkable political importance and of intense artistic development during the VII century, when it was the summer capital of the Lombard Kingdom.

Cyclists will leave Brianza for the province of Bergamo, passing through the Lower City and heading to east, along the ancient Tonale Roadthat connects Bergamo to Bolzano passing through the mountains. Along the way the tour will run along Endine Lake, a small picturesque lake in the Cavallina Valley. The lake is set in the narrow valley between tall peaks, with a natural environment virtually intact included in a protected area.

The Tonale Road reaches Valcamonica, in the province of Brescia, a valley whose inhabitants settled there by the Neolithic period leaving cave carvings still visible today.

The 15th stage’s arrival will be on Plan di Montecampione at 1,665, at the foot of the famous ski resort of Montecampione.

From Ponte di Legno to Valmartello

In addition to its modern skiing facilities, Bormio is well-known also for the presence of several hot springs. Its spa baths make it a perfect holiday resort in any season.

After the Gavia Pass, another important (and strenuous climb) is the Stelvio Pass. With its 2,757 meters it is the highest point of the whole race. The pass is located in the Ortler Alps between Valtellina and  the mid Venosta valley. Adjacent to the pass road there is a large summer skiing area.

The original road was built in 1820–25 by the Austrian Empire to connect the former Austrian province of Lombardy with the rest of Austria. Before the end of I World War, it formed the border between the Austro-Hungarian Empire and the Italian Kingdom.