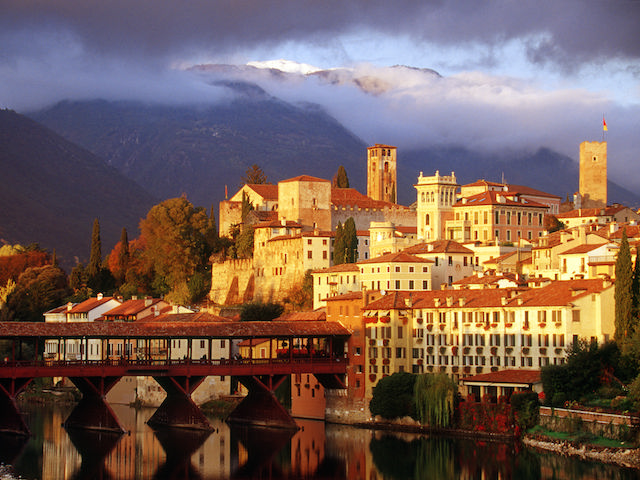 If you are a bike lover, you can’t miss Bassano and its surroundings.

Late spring is the right moment to take some days free and visit one of the most appreciable places in Veneto: Bassano del Grappa.

Spargles, cherries and many other reasons move here people from many part of the nation and Europe. Giro d’Italia will arrive here soon.

Bassano is such a very peculiar place: born and grown in the middle of Vicenza and Treviso areas, this little city has its own personality, bond to mountains and Brenta River that runs across the city center.

Bassano del Grappa means Bassano near Monte Grappa, eventhough many people confuse the name of the mountain with the Italian word that translates ‘snaps’. Bassano actually is one of the best places in Italy for the production of very high quality snaps. Nardini Distillery and its own shop in the city center are for sure the one of the spots to visit here.

The colour of the Asparagus

Bassano is very famous also for a peculiar product of the earth: White Asparagus DOP.

White Asparagus grows beneath the field surface, never seeing the sun: that’s why it is white and not green as the other asparagus in the world.

Its taste is so sweet and smooth and this vegetable is the king of the recipes in this area.

Any king has to have a queen besides him. The queen of this territory is Marostica Cherry IGP, that grows in another village, some miles far from Bassano.

Late Spring, such as the month of May, in the right period to come here and look for a restaurant where to taste some special recipes such as risotto with asparagus and cherries.

A dish like this is perfect when tasted with Vespaiolo: a typical white wine of this zone, perfect with asparagus.

Bassano and the sourroundings are not only a good place for recipes and taste, Bassano is also a place where history has its own role. This zone and the city itself had a main role on First World War. The border between Austria and Italy (at those times) was not so far from here and this little land saw many battles and terrible moments.

For istance, Plateau of Asiago is only few miles from here and there it is possible to touch with hands many ‘locations’ of the war.

In 2014, 100 years after the beginning of the conflicts that changed Europe taking it into modern times, it is very important to visit placese like Bassano, Asiago and the sourroundings areas.

There you can find good food, a lot of smiles, bright colours, nature and also the remembrance of a very impressive period of our history.