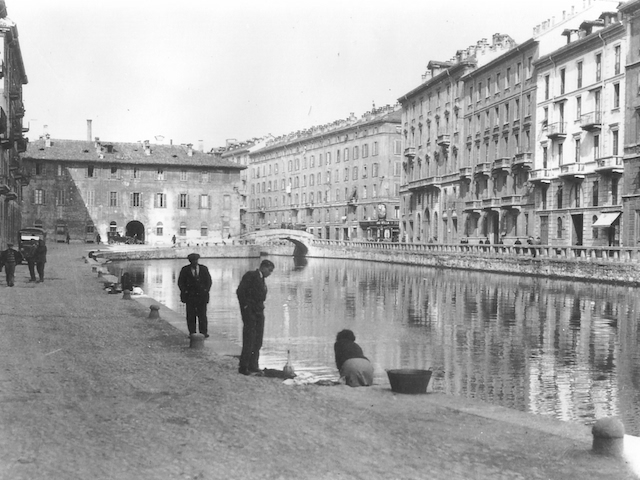 Have you ever asked for the reason why there are canals in Milan?

Probably none of you know that the city of Milano is very rich in water. How is it possible?

Milan is far away from large rivers and lakes, not to mention the sea. Milan is full of water because of its Navigli, an ancient system of navigable and interconnected canals stretching all around the city.

Nowadays only 3 sections of the canals are still visible:

In the past Navigli also included a number of smaller channels, which now flow underground. Starting from the XIX century onwards all the other canals were gradually covered, until, in the ’30s, the total coverage of the inner circle was completed.

The system of the canals has ancient origins and is still one of the most picturesque and fascinating aspects of Milan. Built between XII and XVI centuries, the Navigli are basically artificial canals initially designed for defensive purposes, but also used to provide the water necessary for the life of the city and the craft activities.

It is in 1179 that the people of Milan decided to dig a long canal to take the water from the Ticino river. This is why this canal was initially called ‘Ticinello’ (small Ticino). Later it became ‘Naviglio Grande‘ (Big Naviglio). It was instead in the middle of the XVI century that Francesco Sforza, the governor of the city, ordered to transform the existing Martesana channel building a system of locks.

Also Leonardo da Vinci, who lived for almost 25 years in Milan, gave his contribution to improve the canals system. In 1482, newly arrived in Milan, he was commissioned by Ludovico il Moro to study a channel system to make the navigation from Lake Como to Milan possible. Leonardo designed the system of locks to overcome the problem of the gradient of the land and managed to make it possible to navigate. He didn’t lose the opportunity to make also some sketches, now preserved in the Navigli Museum.

Finally we come to 1805, the year in which Napoleon completed the construction of the Naviglio Pavese, which stretches for 33 km, from Milan to the town of Pavia. Milan’s dream came true: it was possible to reach the sea by the Naviglio Pavese and the Po river. At that time Milan was praised by the most famous poets and writers. Stendhal described it as one of the most beautiful cities in the world. Alessandro Manzoni remembered Milan’s historic sailing in his famous novel ‘The Betrothed’.

In the second half of the XIX century the system of canal transport declined because of the slow travel – 3 km per hour – and the competition of modern means of transport, like railways and tramways, that supplanted the river navigation inside and outside the city.

Of all the inventions and projects made by Leonardo, many were not accomplished, but it would be interesting to ask his point of view nowadays, when projects of reopenings, albeit partial, of the original network of canals are springing. Plans are afoot to restore the Naviglio Grande and the Naviglio Pavese, which suggests the aim of rediscovery of the unique heritage of the city of Milan.

One Reply to “A unique heritage to rediscover: Navigli district in Milan”