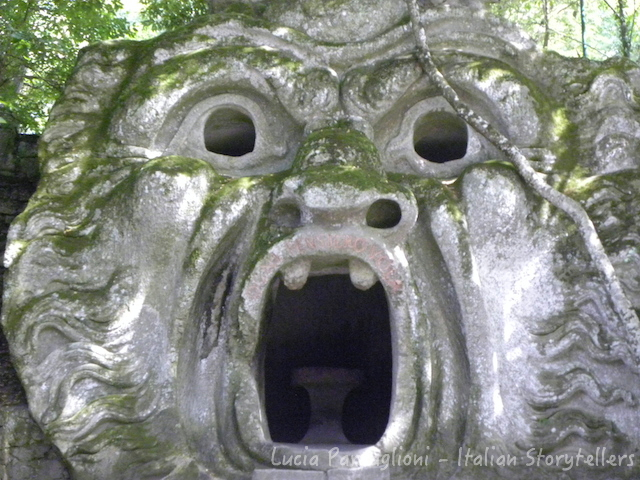 Welcome to the Monster park in Bomarzo.

30-minute drive from Viterbo, in the village of Bomarzo, is the mysterious Monster Park: a proper open-air museum, a path that will take you amongst gigantic stone statues that seem to come out directly from the ground shaped like animals, mythological figures, monsters and so on. The Monster park is also called Bomarzo park or Sacred forest of Bomarzo, in Lazio region.

The story tells that Duke Vicino Orsini commissioned the creation of those statues in the XVI century, when grieving for the death of his wife Giulia Farnese. The architecht who designed the park was the architect who worked on Saint Peter’s Basilica in Rome after the death of Michelangelo: Pirro Ligorio.

Vicino Orsini dedicated himself to classical studies for 25 years after the death of her wife and so he found inspiration for the creation of his ‘Villa of Wonders‘. His aim is to create a unique work in the world.

He dug sculptures using mammoth blocks of peperino stone, the stone of which Tuscia abounds. Probably only death prevented him from using all the countless blocks that had at his disposal. On each of them it is engraved not always clear verses about the afterworld, clearly dedicated to his wife. The garden of the Duke’s estate was populated with dragons, giants, winged horses, mermen and sea monsters, in a fantastic labyrinth of unknown meaning. In the Villa there is also a posthumous temple of Wonders, built 20 years later to honor the second wife of Vicino Orsini. The most beautiful and evocative statues and buildings are:

The park is also equipped for those who want to make a barbeque, a picnic or wish to have lunch at the restaurant located inside (by reservation only): in short, it is the perfect place for a day different than the usual!

The park opened to the public in 1954 after many years of abandon and carelessness thanks a great restoration work. Entrance ticket costs 10,00 €, but for children from 3 to 14 years old the price is 8,00 €. Monster park is opened all the year round:

The park visit will lead you through a series of stages between mythology and fantasy… a great place to get lost in dreaming.