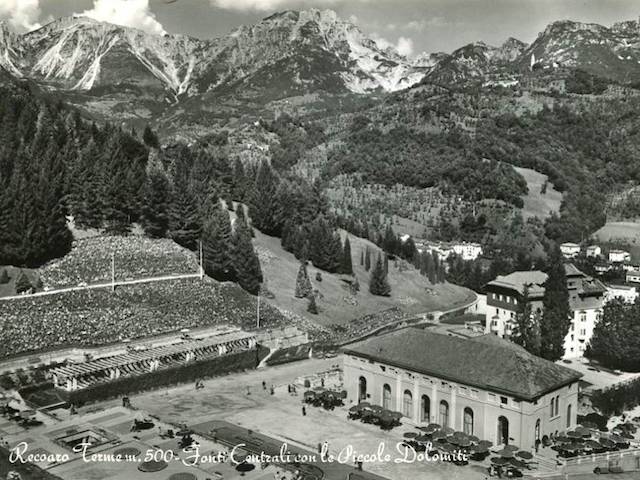 Recoaro Terme: water, history, such a big past and Thermae.

Recoaro Terme is a small village at territorial end of Vicenza county. This place was very famous in the past because of the properties of the water that springs out of the mountains nearby.

Nowadays is very common to find Recoaro water bottled and served in many restaurants in Northern Italy but, once upon a time, people have to come here to taste personally the important features of this natural liquid.

The origins of Thermae in Recoaro are so ancient: a very old document has been found in Venice to attest that in 1779 someone came to Recoaro to test water for the Government of Serenissima.

During the first years of Italian Kingdom, in 19th century, the Queen was used to spend a part of summer in Recoaro, in order to ‘get well’ and rest in the mountains of Veneto. She was used to drink water too.

Recoaro Water has medical properties still in use today, but glorious days of the past are no longer visible in Recoaro.

At the beginning of 1900, Recoaro was full of Art-Déco villas and hotels. During the summer population doubled, because of many tourists coming here for ‘the Season’. Recoaro such important as Bath in Regency period and was the right place to find someone important or rich to marry or simple to go around with.

The village lived a very second juvenility in the ’60s because the finale of a sort of singer competion called Cantagiro took place here. The final concert found his stage on the central square of ‘Fonti’, i.e. the Thermae as called here. Many people from any part of Italy came to Recoaro to attend the concert and to live a kind of ‘Dolce Vita’ just for a couple of nights. My mother was just a teenager at that time and she told me that she always hoped to meet some important actors there. And so happened. Recoaro was the centre of the world, eventhough for just a few days.

In the ’80s I was used to spend many summer nights there with my parents and I still remember how many people there were in the streets. Recoaro was so crowdy and I was impressed by the numers of hotels, shops and bars.

Now Recoaro is like a sleeping beauty that remembers its glourios past days but has no strength to carry on and start rebuilding that kind of fashionable atmosphere of the past. The Fonti are still alive and Art-Déco buildings are still there, with some more years on the shoulders. Recoaro is still a wonderful place, as far as I’m concerned.

I’d like to think that a new future is coming for this village, taking with it wind for change and hope for a new beginning.