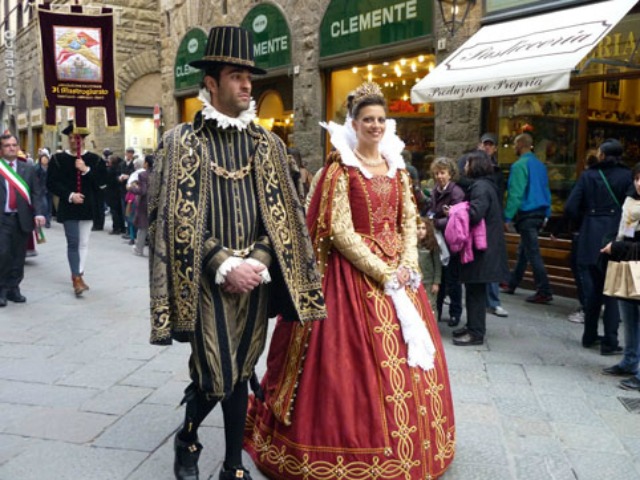 The Middle Ages are alive.

Come back to the traditions revived by each village.

I’ve already told you about one of the most exciting medieval event in Umbria, the Candle Race of Gubbio, but it isn’t the only one.

Umbria is a region rich in history, culture and historical traditions, and there are many events that show us its ancient character.

The Corsa all’anello (i.e. the Ring race) is a historical reenactment dedicated to Saint Juvenal, the first bishop of the town, and takes place from the last week of April till the second one of May, building up with the Corsa al Campo.

The event is one of the events that most successfully explores the connection with its historical traditions. It starts with the reading of the Announcement, whit the opening of the taverns and the striking decoration along the streets and the squares of the centre, followed by the Offer of the candles and the Medieval days, organized by the 3 districts:

The Historical procession takes place on Saturday evening through the streets, enlightened by the glimmer of the torches: over 600 people in authentic costumes march in the parade, opened by musicians and the Municipal and Papal Magistratures with gonfalones and banners.

Then, the second Sunday on May, the Procession and the knights march around the square where the Corsa all’anello takes place: each knight ride his horse along an elliptical path and he must thread 3 rings through a long pole, facing his opponent.

The Giostra della quintana in Foligno, with its two horse races, is one of the most important and famous medieval equestrian competition in Italy: the first race is called La Sfida (i.e. The Challenge) and takes place in June during the evening, while the second one, La Rivincita (The rematch) is on a Sunday in September, in the afternoon.

The Palio is the most exciting moment for the city, because it’s time to challenge for the knights of the 10 wards of Foligno: during the race, each knight is called with the name that represents the features of his own district, and he has to do the track 3 times to catch the rings with a spear, while he’s riding at full gallop.

The knight who obtains all the 3 rings in the shortest time wins the challenge.

The Quintana is not only these races. It’s a fascinating celebration that includes art, culture and exhibition. The night before the game, there’s an historical parade through the city Centre, with almost 600 actors who wear fabulous, sumptuous Baroque clothes, datable back to 16th and 17th centuries.

Città della Pieve is a little town situated on the border with Tuscany and Lazio regions, and it celebrates its medieval origins with Palio dei Terzieri, a charming event taking place on the Sunday after Assumption Day in August.

The three Terzieri face is an archery contest: 3 archers for each district are allowed 3 strikes in order to hit mobile bull-shaped targets, which rotate on a single carousel with an increasing speed from the first to the third round.

What are the origins of this contest?

Between 15th and 16th centuries, Città della Pieve staged the first imitation of the Sienese rudimentary bull hunts, in which a white Chianina was captured with spears: the Palio is inspired by this tradition, but nowadays it includes events, games, plays and the historical reenactment with 800 reenactors in Renaissance costumes that introduces the challenge.

Every year, in June, the enchanting town of Bevagna houses Mercato delle gaite – the Market of the districts – reconstruction of medieval daily life alongside the artisan, economic and commercial activities of the period between 1250 and 1350.

During the Middle Ages, Bevagna was divided into 4 gaite that developed around the main churches of the town, that gave their names to each district.

to obtain the Palio, a silk banner, depending on the score assigned by a jury to the quality and the historical accuracy of each contest.

Each Gaita is specialized in a specific activity:

I’ve presented you an overview of the most renowned historical events of my region, but there are a lot of other medieval reenactments, for example the Calendimaggio in Assisi, with the costumed Procession and the Palio, and the Palio dell’Oca in Orvieto, with the challenge among the knights of the different districts of the city for the assignment of the Paliotto.

Sensations of an ancient and existing history unravel, as you pass through hundreds of medieval villages!