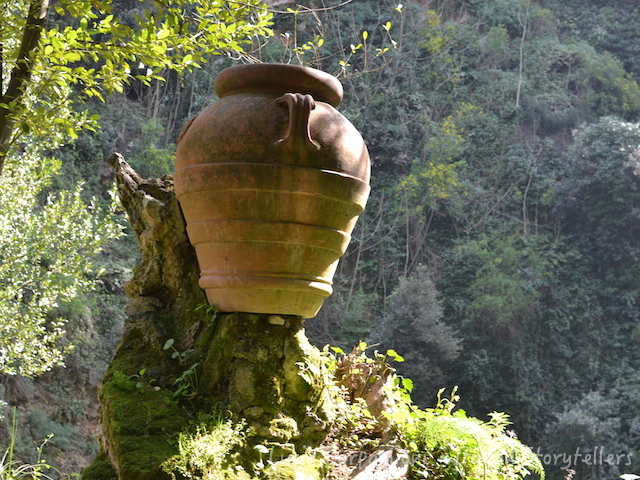 Apart from famous Roman villas, there is one where the past comes true.

There is a small town a few kilometers from Rome, Tivoli, famous for its villas: Villa d’ Este, Villa Adriana and the less known Villa Gregoriana. And I want to talk about it, the less famous Villa, built by Pope Gregory XVI (hence the name), in order to fix the old bed of Aniene river that in 1826 was devastated by a disastrous flood.

Nominated for Most Beautiful Garden of Italy, with its waterfalls, caves, ruins, walking by those paths is like stepping back in time. Its charm has attracted poets, emperors, writers and artists from all over the world for centuries.

In fact, despite being a relatively ‘young’ park, here there was a Roman Acropolis, of which the remains of the temples of Vesta and Sibilla, and the ruins of the Villa Manlio Vopiscus, the Roman consul, can be still admired.

Roman remains are viewable along the way: vases, walls, ruins accompany the romantic landscape of paths and stairs carved into the rock, caves dug by the force of the water over the centuries, streams of clear water.

The park is located in the so-called Valley of Hell, a steep valley dug by the Aniene river, at the point where it plunges into the Roman country-side. Under a thick forest of giant, dark trees, next to gloomy and massive ruins of ancient buildings, on the edge of vertiginous chasms, in hard rocks and steep ravines, within green and short clearings gloriously illuminated by the sun, meander paths, rocky paths, steep little streets, corroded stairways, small tunnels that lead the visitor to discover the most diverse visions.

If you proceed to the right, just after the entrance, you arrive at the tunnels’ mouth, where the river precipitates to form the large waterfall, 400 feet high. The waterfall is fascinating, among the most interesting in the world for the superb picture offered by all the natural beauty that frame it. Feet below, along a difficult path, you reach the so-called ‘Iron Horse’, consisting of a balcony protruding on the large waterfall.

From the ‘Iron Horse’ you can see the swirling mass of water that seems to fall on the head of the beholder, in a deafening roar, and the depth that the waves reach. Going back and descending the central part of the park, you will come across the channel of Stipa, Neptune’s Cave and the Cave of Mermaids, opened during the long centuries from the Aniene waters that have slowly eroded the rocks, which still reveal visions of impressive chasms.

Neptune’s Grotto can be reached through the Miollis path, a tunnel into the rock, dug in 1809 by the French general, governor of Rome. To illuminate the path, Miollis did make openings from which you can observe the magnificent landscape outside. The name ‘Cave of the Mermaids’ was instead given by the painter Ducros, a famous landscape painter. He, admiring the stunning scenery of the cliffs in this cave where the waters come down from the Grotto of Neptune, and those of the cascade of Stipa, imagined them as a legendary place inhabited by those wonderful sea creatures that are mermaids. Above this cave you can see a natural bridge, called the Ponte Lupo, which in far times was used by the locals for travels with their livestock.

The path ends up with the villa ruins: you can also sit around an old stone table, maybe close your eyes and imagine the days of ancient Rome, with the certainty that when you’ll open them again and you’ll look around, the dream won’t fade.