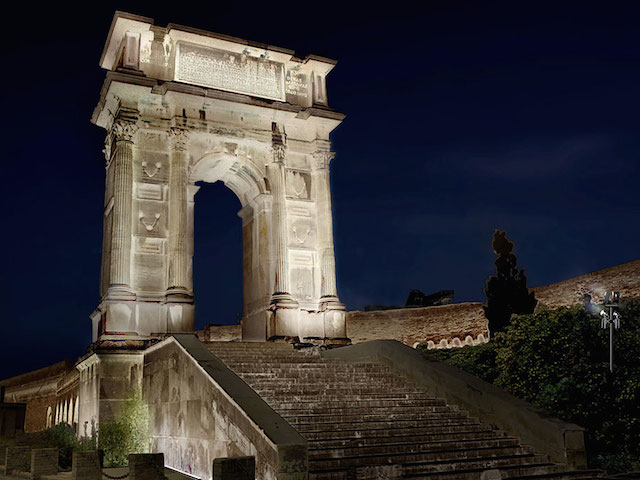 For the archeological lovers a lot of sites to visit.

One of the main street to arrive in the Marche from Rome was the Salaria, the street of salt arriving to Porto D’Ascoli. Ancient Romans had a lot of cities in Le Marche region; most of these archeological areas are open and in very good conditions also if they are not very famous. I want just to introduce you the most important ones.

Very close to Macerata the ‘Urbs Salvia‘ site is a very important one. More than 40 ha, a perfect amphitheater, with a lot of oaks on its top, a theatre, the old street and a cryptoporticus with wonderful frescoes. Urbisaglia was founded in the 2nd century BC by Romans, as a colonia, and then destroyed by Alaric in V century BC. Dante Alighieri mentioned it in the Paradise talking about its desolation. In 1994 the roman site officially became an archaelogical park. You can reach it by going out the medieval city walls and walking for 1.5 km. From this point on you can admire down the ancient town.

The magnificent Arch of Trajan Emperor

Made entirely of marble, it was built in the 1st century B.C. It remembers the enlargement of the Ancona’s port and the starting point of the successful war against the Dacians (you can find it represented in a bass relief of Trajan’s column in Rome). For the Romans the Arch would be a landmark to those arriving to the Rome’s greatest Adriatic port. The Arch is one of the many triumphal arches built by the Romans. You can find it in the Ancona’s port area, in the same place where it was constructed. The inscriptions and the statues were stolen by Saracens in 848.

In the small village of Falerone, along the Tenna river, there is another archaeological area. The most important work is the small theatre with a big oak protecting it. During the summer the theater hosts a lot of events.

The theater remembers the ancient Falerio Picenus and is the best preserved monument in Le Marche region, despite the several sacks. Most of the remains found in this area can be seen inside the Archaelogical civic museum in Falerone.

Not very far away from Falerone, on the beautiful Monterinaldo countryside, there is the Cuma Archeological Area. There are rests of a sanctuary, probably dedicated to the ritual of healing with water. In the area there are lots of ruins like several waterways, a portico, a temple and a rectangular building of undefined use. In particular the portico is very gorgeous with its two parallel colonnades of ionic-italic order and a back wall in a large sandstone blocks.The underground Roman city In the city of Fano the Romans ruins are underground (subterranean) and discovering it means to go up and down several times in different points of the city. You will walk through burrows and galleries going back to 2000 years ago discovering an hidden world. Most of the finds from all the regional sites are now kept in the National Archeological Museum of le Marche, located in Ancona. The museum is open from 8.30 to 19.30 from Tuesday to Sunday. The price of ticket is 4.00 €, from 18 to 25 years old is 2.00 € and the entrance is free up to 18 years old and from 65 years old.