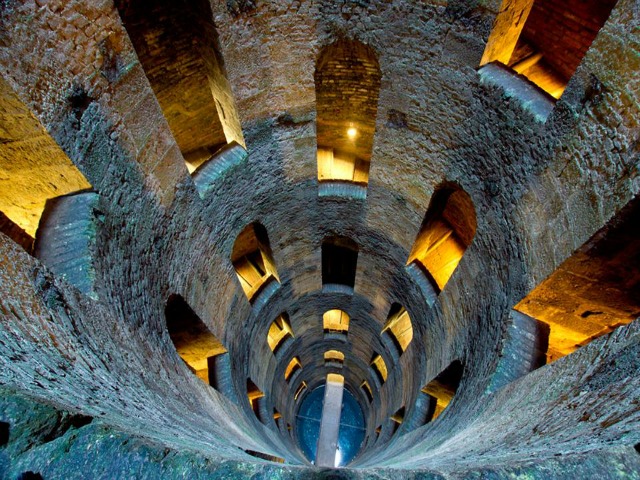 The perfect place where combine nature, culture and excellent gastronomy!

Orvieto is a millenary town isolated atop a spur of tufa with a unique charm: its origin dates back to the Etruscans, but its monuments and museums tell about centuries of history, and in particular its medieval imprints are all around it.

If you arrive to Orvieto by car or by train, you can take the funicular directly in front of the railway station and it will bring you on the top of the rock, very closed to the city centre: the uphill road in front of you, slightly on your left, is the Corso – the main street through the town.

The heart of the town has a slow and relaxed pace and deserves to be leisurely explored in its entirety, walking easily along its narrow alleys through elegant palaces, romantic cloisters, ancient windows in flowers, medieval towers and a lot of gastronomic and handicraft  shops.

What to visit in Orvieto

You absolutely can’t miss it, because it’s the city’s most important, fascinating and unrivalled masterpiece, one of the main examples of Italian Gothic architecture.

Walking through the picturesque narrow alleys of the city centre, the Duomo appears little by little in front of you and takes your breath away, thanks to the magnificent shining golden mosaics and the elegant bas-reliefs that decorate the façade, works realized by Lorenzo Maitani, Tuscan architect and sculptor.

The building started in 1263, under Pope Urbano IV, to commemorate the Blood Miracle of Bolsena: during a mass in the Church of Santa Cristina, at the time of Eucharist, blood started gushing out from the broken Bread.

Inside the Cathedral, don’t miss the Chapel of St. Brizio and its vaults decorated with scenes of the Last Judgment by Luca Signorelli and Beato Angelico, one of the most interesting examples of Italian Renaissance paintings.

If you want to deepen your knowledge of the Duomo, you can also visit the Museum of Orvieto’s Opera del Duomo (MODO) situated in the Palazzi Papali next to the Cathedral: it houses a rich and vast patrimony of paintings and sculptures, that the Fabbriceria has been looking after for over 8 centuries.

This beautiful museum is housed inside the medieval Palazzo Papale, just beside the Duomo, and includes numerous findings from necropolises of the area, in particular grave goods containing Etruscan and Attics ceramics, the typical ‘Buccheri‘ and a bronze full suit of armor.

Some of these evidences are from the Necropolis of Crocifisso del Tufo, in the northen side of Orvieto’s rock, dated around the 6th century BC: the tombs are characterized by the presence of numerous inscriptions, the most consistent epigraphic testimony of Archaic age in a single community.

Particularly significant is the recreation of the 2 famous Etruscan chamber-tombs, called Golini I and II, discovered in 1863: the original frescoes, that describe the funeral ceremony and the descent to the afterworld, have been detached from the tombs for conservation needs, and replaced here.

If you’re interested in the origins of Orvieto, a few steps away from the National Museum there’s another place to visit, the Faina Museum, which represents one of the most important collections of Etruscan civilization: buccheros, bronzes, jewelry, vases and the Venus of Cannicella necropolis.

If you want to enjoy a breathtaking bird’s eye view of Orvieto, this medieval tower is the perfect place for you; it also represents a focus during your town exploration, because it’s situated at the crossing of the two main streets, and you can see it standing over the city from everywhere.

The 47 meter-tall tower was built around the end of the XIII century as expression of the economic and political development reached by the medieval Municipality, that edified also the Palazzo dei Sette during the restoration of the Town Hall, because the most important magistrates needed a public place to meet; they where 7 consuls who represented the Arts – this explains the name of the palace!

Orvieto is located on a tufa plateau, so the best way to discover the town, characterized by thousands caves, is visiting some of the interesting man-made cavities in the underground.

The guided tour, starting in front of the Duomo, leads you through more than 1200 caverns, burrows, wells and cisterns, due to 2500 years of uninterrupted diggings, which created  a corresponding underground city discovered in these last years.

It was built by Antonio Da Sangallo the Younger in 1527, under commission of Pope Clement VII, following his stay in town after the sack of Rome, in order to ensure a water supply to the city in case of sieges, and was completed in 1537.

What makes this well a unique example of engineering audacity is its double helicoidal staircase: one spiral staircase for descending and the other for ascending, each with 248 steps and totally independent one from another.

In the heart of the medieval quarter of the town there’s another underground itinerary through 9 caves created during the restoration of the originary etruscan well commissioned by Pope Clemente VII before the construction of the St. Patrick’s well.

This complex shows the Etruscan, Medieval and Renaissance archeological signs of its history, all lying together.

If you want to relax between a visit and another, you could go to the public gardens inside the Albornoz Fortress, next to the funicular station, to enjoy an amazing view on the surrounding countryside, and don’t forget to taste the excellent Orvieto’s culinary traditions, with its high-quality wines, olive oil and savoury dishes!

If you’re planning a trip to Orvieto, I suggest you to buy the Orvieto Carta Unica: it’s a convenient way to discover the town, throughout an itinerary including all the most interesting sights.

You should get it as soon as you arrive in Orvieto, because it’s very convenient also for public transport, you can choose either a free round trip ticket funicular + minibus on line A or B, or you can use the minibus free, on lines A and B; in addition, you can use your card for single discount in several member shops, restaurants and hotels.

How to get there: you can take the train stopping at Orvieto station or the car, driving along the A1 Highway exiting at Orvieto.
Where to sleep: Misia Resort, Altarocca Wine Resort, Hotel Virgilio.
What to visit: Cathedral, National Archaelogical Museum, Torre del Moro and Palazzo dei Sette, the underground, St. Patrick’s well, Pozzo della Cava.
What to do: relax in the public gardens inside the Fortezza di Albornoz, taste the umbrichelli or the Pera di Monteloene.