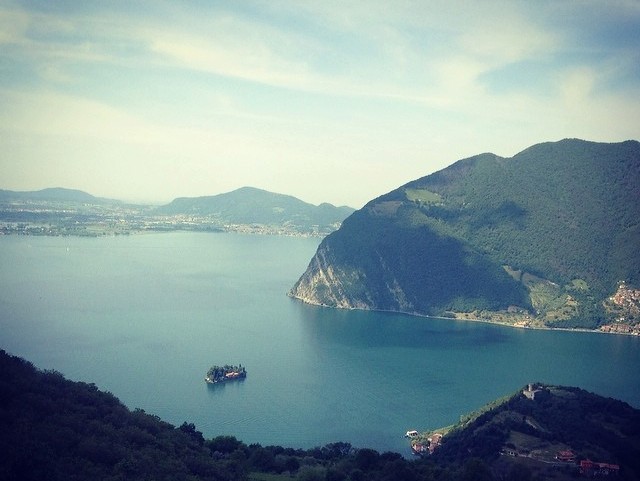 The largest lake island in Italy and the highest in Europe

You simply cannot talk about Lombardy without mentioning its lakes. Dotted with a myriad of big and small lakes – of which Como, Garda and Maggiore Lake are only the most famous – Lombardy can be fully considered the Italian “Lake District”.

One of the peculiarites of Lombardy’s many lakes is Montisola, a small island located in the middle of Lake Iseo, between the province of Bergamo and Brescia. Montisola is special. Why? For many reasons. First of all because it’s the largest lake island in Italy and the highest in all Europe (its peak is 600 mt high and the island’s name itself means ‘Mountain Island’).

Once just a small fishermen’s village, covered with woods, a stunning vegetation and ancient ruins, Montisola is nowadays visited by many thousands of tourists every year.

Montisola is the ideal spot for a day trip or a romantic weekend, a very relaxing spot for a getaway. Quiet and peaceful, this tiny island has another peculiarity: it has no cars. Only bicycles or motorbikes are allowed. It is definitely a small oasis of peace.

Covering an area of just 4,5 km2 and with a perimeter of 9 km, Montisola can be discovered on foot, by bicycle (available for rent directly on the island) or with a boat tour (that will take you also to the picturesque San Paolo and Loreto, 2 private islands close to Montisola).

The village of Monte Isola, distributed in several suburbs scattered all over the island, has an ancient tradition of manufacturing of networks (dating back to the IX century) and of wooden boats (internationally renowned). A visit to the local Network Museum, in Siviano, to get to know anything about this old tradition of the island, is highly advisable.

What to do in Montisola

The island is perfect for a stroll along the lake but also for sunbathing and swimming (the waters of the lake are particularly clean). There’s a couple of public beaches and areas for picnic.

You can even decide to visit the Medieval village of Novale or Madonna della Ceriola, the shrine on the highest spot of the island (600 mt on sea level). From there you’ll enjoy an extraordinary view of the whole lake.

Montisola has also excellent hotels and restaurants where you can taste the specialties of the island, like the local salami or polenta with lake fish (like lake sardines and whitefish). As in the past, sardines are dried in the sun still nowadays (still visible visiting Montisola).

The most famous event on the island is Santa Croce Day, a religious festival that dates back to 1836, when the village escaped a cholera epidemic, and that takes place every 5 years in September in Carzano. On this occasion all the village is decorated with handmade flowers made of paper and pine branches.

Montisola can be reached by ferry-boats or taxi boats from both the western and eastern shore of the lake. The fastest drive is from Sulzano, where ferryboats leaves every 20 minutes (every 40 minutes at night).