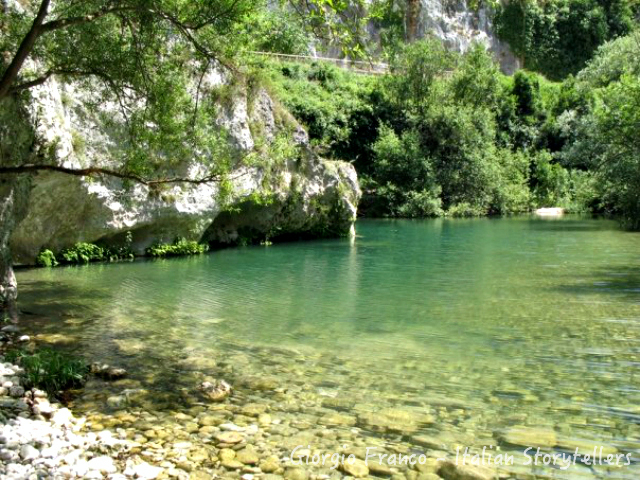 In the warm Sicilian autumn

The color of these landscapes is the magic of nature. It was in the late 1800s that archaeologist Paolo Orsi explored a huge necropolis on the cliffs, bathed by the river Anapo and the tributary Calcinara. Grand canyon composed of numerous caves and open windows in the sides of the mountains.

Paolo Orsi estimated about 5 thousand prehistoric graves of people who lived in this place during the late Bronze Age. In those places the Anaktoron still persists on the heights: ancient buildings similar to those of Mycenae. Spirals, mazes and labyrinths were, and still are, potent metaphors for peoples all round the world. In a warm surreal, as that of this fall, becomes just as magical ritual to bathe in the waters of the river Anapo. Where there is water, there is life. These seats geomorphologically have allowed the ‘rock phenomenon’. Because for many years, centuries, the cavities meant everything: tombs, houses, factories or after the Byzantines Speakers.

Spontaneous architecture that have absorbed the man. Contrary to today, this custom derived from the belief that the existence of an individual was important if it was seen as the preparation for the afterlife. The headwaters of the river Anapo born in the highest part of the plateau Ibleo on Monte Lauro. Anapo in Greek means invisible, inside the cave, in fact legend has it that Hades, king of the underworld, during the abduction of Persephone, hides the river Anapo in order to flee.

Anyone who thinks that in the dark wood there is Dante’s inferno? Here, after thick Mediterranean scrub, is paradise.

The descent is rewarded by a celestial vision. This is the contradiction of the place. The wonder is a fundamental condition in the expression. The wonder, the unexpected, the mystery arouses in us the interest and desire to understand. This conveys Pantalica.

To open the doors to the descent to the valley is the agent of forest Giorgio Sampugnaro. Hence our Virgil speaks of the rich and varied fauna. The most characteristic inhabitants are the birds who with their flight and mating rituals fill the sky with colour and song. We find wrens, blackbirds, kingfishers, thrushes and coloured bee-eaters. Along with the peregrine falcon, the valley shalters buzzards, kestrels and ravens. Legends concerning ravens are very ancient; Pliny records a popular belief that a pregnant woman would give birth through her mouth if she ate a single raven’s egg. But not to worry, as it says Manlio Sgalambro: Sicily carries with it a special magic, hard to express.

Everything speaks of a land, such as that Hyblaea, where everything back to the ancient. Everything tells the bonds, such as tree roots that tangled on the rock; like the nests of the birds that are intertwined with the branches. Panta rei. Pantalica!

One Reply to “What is autumn? A refreshing dip at Pantalica!”