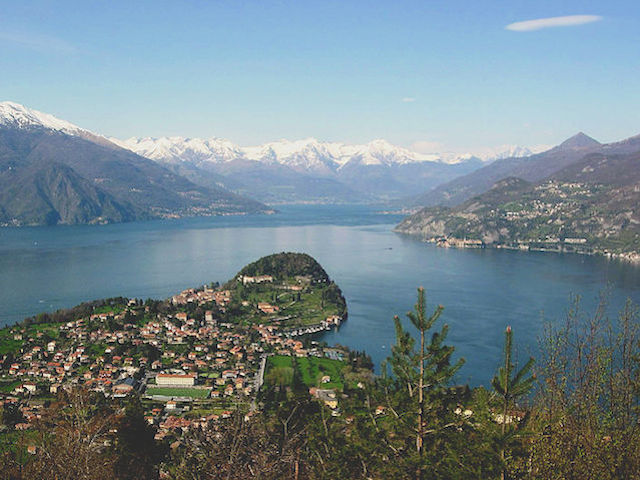 Jump on board the ferry boat and start the tour.

It’s not a surprise that in an article about the world’s 20 most beautiful lakes, the Huffington Post ranked Lake Como in 1st position. With its superb microclimate and amazing surroundings made up of villas, ancient villages and overlooking mountains, Lake Como is among Lombardy’s most remarkable attractions.

The 3rd largest in Italy, the 5th deepest in Europe, Lake Como looks like a fjord carved into the mountains, the Lombardy Prealps. Its romantic outlook and stunning landscape attracted (much earlier than Hollywood’s actors) artists from all over Europe like Byron and Stendhal. Also Napoleon, Hitchcock and Curchill used to spend their time here.

Where to start a tour of Lake Como? What to visit in a day?

About 80 km from Milan and easy to reach with the A9 motorway (the so called ‘Autostrada dei Laghi‘, i.e. Lakes motorway), the best starting point for a day-tour of the lake is Como. The best option is to move across the lake using the boat public transport that connects Como with different villages of the lake. The typical boat excursion leaves from Como in the morning and return the same evening with possible stops all over the lake.

The first stop can be in Cernobbio, an important touristic destination, well-known for Villa Erba, a congress and exhibition center, and Villa d’Este, an ancient villa with a large Italian garden and Renaissance avenue, once residence of Caroline of Brunswick, wife of George IV of England, now a luxury hotel. Cernobbio is at the foot of Mount Bisnino (1,325 m), from where you can enjoy an amazing view on the lake.

Just beyond the peninsula of Punta Balbianello, after Lenno (with 2 interesting Romanesque buildings dating back to the XI century, the Church of Santo Stefano and the octagonal Baptistery), begins the coast called ‘Tremezzina’ or ‘Riviera delle Azalee‘ (Azaleas riviera) which ends shortly after Cadenabbia. The coast is dotted with villas and hotels surrounded by parks and gardens, with magnificent views of the central basin of the lake. You can stop in Tremezzo, a remarkable touristic destination thanks to its mild climate and amazing landscape. Here there is Villa Carlotta, one of the most famous villas of Lake Como, with a magnificient botanic garden and art pieces and the panoramic church of  San Martino.

Jump onboard the ferryboat again to head to Menaggio, in the middle of the western shore of the Lake. Here is Villa Mylius Vigoni, characterized by an interesting park and now home to the Centro Italo-German Villa Vigoni, an important meeting place for seminars and conferences.

The extensive landscape of the upper part of lake is more solitary and generally subjected to the wind, which makes it the ideal spot for wind-surfers and kite-surfers. The main center is Colico, the northern tip of the lake, in the past important communication center between Valtellina and the lake. Don’t miss a visit to the Abbey of Piona, with its magnificient view on the lake.

Your next stop can be in Bellano, a pretty small village on the eastern shore of the lake, and then Varenna, structured according to the regular Roman layout and fortified during the Middle Ages. Here are two more villas: Villa Isimbardi with charming terraces and rows of cypress trees, and Villa Monastero, directly overlooking the waters of the lake.

From Varenna you can choose to head to Mandello, Abbadia Lariana and Lecco, on the western branch of the lake, or head to the town of Bellagio, on the promontory that divides the two branches of the lake. The historical center, located in a higher position and dominated by the Romanesque basilica of San Giacomo and the most recent lakefront porches have been preserved intact. Among the noble villas Villa Serbelloni, the neoclassical Villa Melzi (described by Stendhal, this noble residence had among its guests famous personalities like the Emperors Francis I, Ferdinand of Austria and the musician Liszt) and the neogotical Villa Trotti.

On returning to Como you pass by Isola Comacina, the only island in the lake, facing the XIV century Santuario della Madonna del Soccorso. From Lezzeno, the 1st stop after leaving the island Comacina, the view extends to the other side, admiring the Lavedo peninsula, jutting out into the lake with the vast complex of Villa Arconati.

Careno, a small village accessible only on foot, with typical stone houses and 2 churches, the Romanesque San Martino and the parish church of the Assumption, of the 17th century, and Pognana, with its Romanesque church of San Rocco, modest stone buildings and beautiful buildings dating back to the XVII century, are both worth a visit.

Just a few minutes before Como there is Torno, a town famous for the production of textiles and tapestries, the characteristic medieval buildings and the XV century parish church of Santa Tecla, overlooking the marina, and the XIII century church of San Giovanni with a bell tower in Romanesque style. From here a path (about 1.5 km) leads to one of the oldest villas of the lake, Villa Pliniana, with its porch prospect that a porch charmingly reflects in the waters, surrounded by lush vegetation.

Besides one way tickets (no stops possible) you can buy a “circular ticket” that allows to make intermediate stops between the ferryboat stations. The validity of the ticket ends with the landing at the slipway of departure.