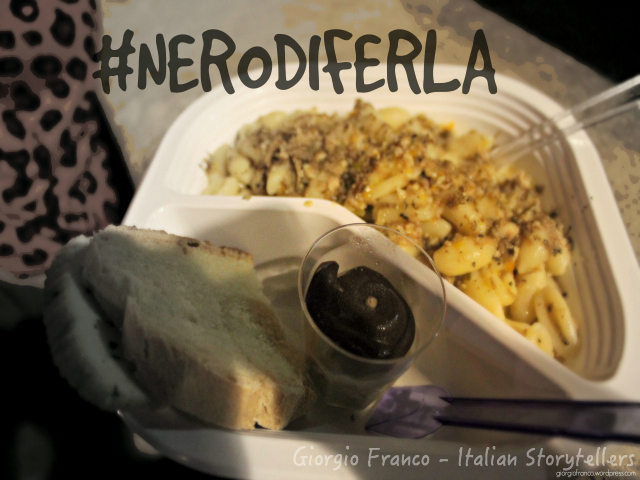 A black gold in the mountains of Sicily

So many faces of nice people come to my mind. People who live their habitat. It’s a journey to the Hyblaean Mountains and to their flora, a gift from the mother earth of the triangle Ferla – Buscemi – Cassaro. Here are preserved oaks, plane trees and carob trees that are complemented by oleander, fig, acanthus and reeds. The inhabitants pick fruits and plants of every kind to cook their traditions courses.

We are in Ferla in the province of Siracusa, a town dating back to ancient time. Ferla is situated in the southern part of Sicily near the Hyblean Mountains. The most famous celebration is related to the Holy Week, but there’s another one: the festivity of Saint Sebastian. It took place on 18th and 19th July. During these days was achieved the 3rd edition of #Nerodiferla (i.e. black of Ferla).

Who knows what would have written today Hessemer Friedrich Maximilian, who described Sicily as ‘the icing on the cake’ of Italy, […] “the rest of Italy it seems to me to be just a stalk that bears such a beatiful flower. In 2011, 210 years later the writer, in Ferla, Santino Spada, one of the last master extractors of truffles in Sicily, said to the new mayor of Ferla, Michelangelo Giansiracusa, that in the forests of its territory there was a particular kind of black truffle, called ‘scorzone‘”.

At first there were some doubts. Also inability to resist the competence of other locations of the truffle. The festival of the Black (truffle) of Ferla was born 2 years ago. Annually, between the summer and autumn, the forests of Ferla and surroundings are full of ‘black gold’.

“It’s important to promote this product” – says Santino Spada – “we can not stand the silence, must be told the origin of this food. For some the truffle does not exist in Sicily”. Giuseppe Cabibbo from Grevenbroichin, in Germany, is a famous Italian chef that makes an exquisite truffle oil. He was the first to try the truffle of the Hyblean mountains into his dishes.

The resources are swallowed by the modern difficulties. This difficulty annihilates what is healthy. But, if we want to say what is tomorrow, we can not dwell on the dead. In any case, Plinio il Vecchio took the view that the truffles were born by thunder and lightning. The food of the gods would not deserve to die today.

The master confectioner Manuel Franco during the festival and in the autumn, prepares recipes of various kinds based on scorzone (i.e. the summer black truffle): cavateddi with meat sauce and truffles, local cheese with truffles, particularly the ice cream with the Black of Ferla.

Working in the kitchen as always done. Though it is not Alba or Norcia, we could leave out a resource so exquisite? Municipalities as Ferla, are willing to enhance the products of their own land. Among many products, oils, wines… even the delicious black truffles.