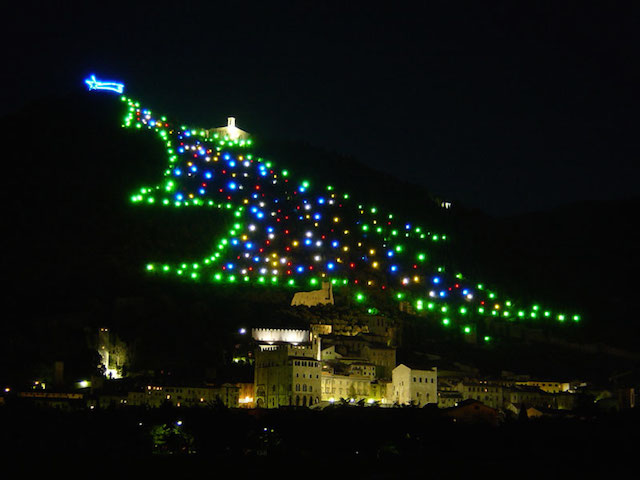 First of all, there’s no Christmas worthy of the name without a bright, decorated tree; do you know that the city of Gubbio has the world’s largest Christmas tree?

Since 1981, this 650-meter-high lighting illumination is annually installed on the slopes of the Mount Ingino: it’s composed by 3,000 multi-colored lights and visible from 30 miles away!

The tree will be inaugurated on 7th December and will remain switched on – from dawn to late night – until 10th January 2015; this year it will be lighten up by Pope Francis, who will participate at the usual lighting ceremony through a video connection and will turn on the tree by means of a tablet!

But no Nativity celebration is complete without a guiding star, don’t you think? We have the largest artificial comet of the world: it stands on the top of Miranda’s hill, a little fortified village with narrow evocative alleys from where you can admire the entire, shining panorama of Terni below.

The star has impressive dimensions: a surface of 3 hectares , 350 meters of tail and about 100 lamps; the comet is obviously visible in all Terni “bowl”, and it’s a touching sigh!

During this period, Umbria hides nativity scenes in every hamlet, cavern and ancient monument: after all, they are the perfect location to host suggestive and poignant holy reenactments, from the most traditional to the most innovative ones.

A splendid example is that of Pozzo della Cava in Orvieto: in the medieval district of the town there’s a suggestive underground path with an array of caves and, among these, a 36-meter-deep Etruscan tank is the location of a Nativity scene with life-size figurines.

Every year there’s a different theme to follow, but the scenic design always respects a realistic location, diet included: food is chosen according to the rules of Kasher cuisine.

Petrignano, near Assisi, has organized a beautiful Living Nativity for decades: over 100 country actors play along every alley of the village and along the Chiascio riverside, reliving the Holy Night in a magic atmosphere, created by comings and goings of lights and shadows.

In the underground of Palazzo della Corgna in Città della Pieve, every grotto contains a different biblical scene: this is the tradition of a 400-square-meter monumental Nativity handed down for decades, reliving through more than 5 rooms, from 25th december to 6th january.

Marcellano is a little, delicious hamlet near Gualdo Cattaneo (Perugia district) that has celebrated Christmas with an extraordinary Living Nativity since 1984; the reenactment accurately follows the Holy Scriptures, but it’s enriched by popular creativity and traditions.

Every corner of the village is a step back into the past: the entrance is guarded by Roman Centurions, and along the lanes you can meet washerwoman with their wood tubs, the fight arranger, the prisons, little markets with field crops, crowded and noisy inns and much more!

Inside the park, along the hiking trails, actors recreate the Nativity Night on the background of this marvelous 165-meter-high waterfall – occasionally open with reduced flow; a narrator voice will introduce you the exhibition in the main outlook of the park, then you can follow the Roman soldier inside it and start discovering every corner of the representation.

Even if these markets are a tradition of Northern Italy, Umbria has adopted them enthusiastically: under the illuminations of the main Umbrian towns you’ll find a multitude of stands full of decorations, traditional products and delicacies, handiworks and kids toys.

Let’s start with one of the most attractive market of the region, that of Rocca Paolina in Perugia: the most fascinating part is the underground, where there are the markets. Stands are rich in craftsmanship products, eno-gastronomic excellences, curiosities, Christmas ornaments and also didactic labs for children dedicated to manufacture and craft production; along the streets of the historical centre there are some taste itineraries to savor traditional Christmas dishes.

The main square of the town, Piazza IV Novembre,  houses the ‘Special Christmas’ Market: more than 50 exhibitors are coming from the Northern Europe with their typical products; while in Piazza Matteotti you can enjoy handicraft and wine&food from Finland, Hungary and Provence, where I am sure you can find original gift ideas for Christmas!

Spoleto houses a little market inside the elegant Leti-Sansi Palace, built at the beginning of the XVII century; it still conserves charming wooden ceilings and the ballroom entirely painted and it’s the location of important events such as Vini nel Mondo and Festival dei Due Mondi.

This is the special location for stands of handicraft and traditional local products, while kids can have fun with some special events like the Santa Claus little train.

Foligno wants to celebrate authentic origins of Christmas markets by hosting exhibitors from Salzburg, who prepare their stands in typical German and Austrian wooden little houses in the historical centre, recreating the atmosphere of northern Europe. Besides the usual handicraft products, embellishments and toys, you can find there both Umbrian and Nordic gastronomic specialties.

Even Assisi has its little market situated in Piazza del Comune, the heart of the town surrounded by the most important and beautiful buildings; not only stands, but also concerts, entertainment, bagpiper shows and educational laboratories for children.

As you can see, Umbria offers many choices to celebrate the Christmas and holiday season, inside the comfortable and relaxing frame typical of the region… what are you waiting for?

3 Replies to “Christmas time in Umbria”