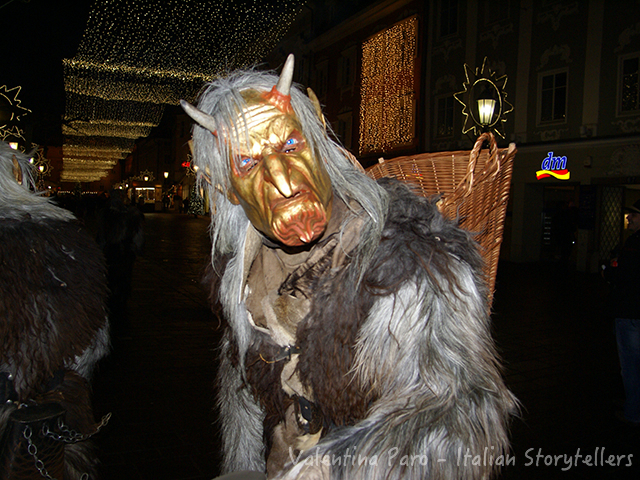 San Nicolò, the Krampus and much more.

Legends, fairytales and traditions are something that amaze adults and children: it’s nice to believe that on Christmas night an old man with white beard brings us gifts riding a reindeer sled.

Yes, Santa Claus also comes to Friuli Venezia Giulia, but the really amazing thing is that in this part of Italy there are many other unique traditions typical of Christmas time.

San Nicolò and the Krampus

Santa Claus bringing gifts to the children of Friuli Venezia Giulia is a pretty recent and commercial habit, traditionally the one who brings gifts in this period of the year in Friuli is San Nicolò, who is the real man who gave birth to Santa Claus’ legend.

San Nicolò comes on 6th December, has a long white beard, wears red and white clothes, a tiara and carries a pastoral staff (many similarities with Father Christmas, don’t you think?).

According to the legend San Nicolò was a bishop who gave to 3 poor children 3 apples that in the night transformed into gold. Now he brings to children little presents, sweets or fruits if they have been good during the year, coal if they haven’t.

San Nicolò is often anticipated by some monsters called Krampus. They are really awful, half men half billy goats. You can hear them coming because of their big bells ringing. And if they see you they can run after you or beat you with their broom till you leave them a money offer.

They usually disappear as fast as they appeared as soon as San Nicolò arrives: that’s the good that drives away the bad.

During Advent it is really common to find in Friuli Venezia Giulia big Christmas nativity exhibitions. Some villages are pretty famous because their streets host many different hand made nativities: you can see presepi around a corner, in the gardens, exposed behind the window of a house. Sometimes private citizens open their home, basement rooms, gardens or cellars to visitors who want to admire their unique Christmas nativities.

Some presepi are carved in the wood by expert artisans, some are made of snow, other embroidered: all materials could be good to build a Christmas nativity, the important thing is to use creativity.

Some of the most famous exhibitions of presepi take place in Poffabro, Sutrio and Grado.

Of course also in Friuli Venezia Giulia – as it happens in other regions – it is very common to find Christmas markets. One of the most attractive in my opinion is the one in Morsano al Tagliamento which is situated inside an old countryside villa: the event is called ‘Anteprima Natale‘ because it takes place in November and not in December, and it is a sort of Christmas preview. Other nice Christmas markets can be found in Trieste and Cividale del Friuli during the whole month of December.

On the 5th January night in some countryside areas of Friuli Venezia Giulia Epiphany is celebrated with big fires. It is a good omen for the new year to burn the bad spirits, moreover it is a farming tradition: according to popular beliefs if the smoke of the bonfire goes to west it will be a negative year for the crops, if it goes east it will be positive.

Now it is an opportunity for people to meet and stay together before the end of Christmas holidays drinking hot chocolate, vin brulé and eating chestnuts. On that night also comes the Befana riding her broom: Befana is an old woman who leaves sweets to the good kids and coal to the bad ones.

On the same night in the small village of Sauris takes place a unique event with very old origins, it is ‘Der Orsh Van der Belin’ (i.e. the hind end of Belin). According to the legend Belin was an old woman who forced the citizens of Sauris who wanted to leave the village to kiss her hind.

Nowadays on 5th December the tourists staying in Sauris have to kiss the hind end of the Belin to get the right to stay there: everything is really ironic with a procession to the old woman accompanied by accordion music that finishes with a drinking and eating in front of a bonfire.