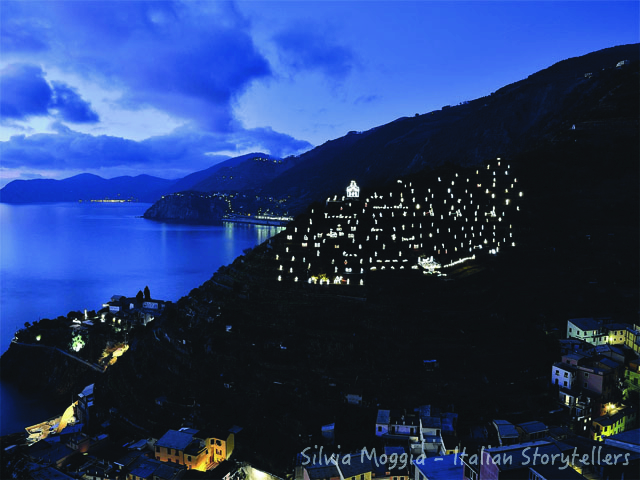 Last week I spent a few hours with Mario Andreoli, one of the sweetest and most passionate men I’ve ever met. Thanks to his determination and passion millions of people experience every year the miracle of his giant Nativity Scene.

Thousands of lights giving life to more than 300 characters scattered all over Mario’s terraced hill overhanging Manarola and the Ligurian sea. The world’s biggest nativity scene began with one single cross in 1961 when Mario’s dad made him promise to rebuilt the ancient Via Crucis pilgrim’s cross that used to stand in the middle of the family vineyard and so he did and the inhabitants of Manarola started walking up there like in ancient time. The following year he added the two side crosses and the following one the nativity hut with the Holy Family.

Gradually, Christmas after Christmas, Mario started adding shepherds, sheep, lambs, fishes… a riot of characters, all built exclusively with recycled materials and illuminated by miles of electric cable laid from this passionate and tenacious retired railwayman. He did everything by myself. He gave to his small village by the sea the best of presents: something unique.

He is now in his eighties and the volunteers of the local CAI (i.e. Italian Alpine Club) started helping him with the installation, so that now he doesn’t have to run downhill till the Church esplanade to check for the result before climbing back up and eventually adjust some details. The Cinque Terre National Park also started giving him some economic support and should now provide for the electricity.

The lighting of the Nativity Scene will take place on December 7th, after a full day of celebrations, starting with a Christmas market opening in the morning, lots of activity and games for kids, music, fried pancakes, wine and, after the mass, at sunset an impressive torchlight procession leading to the Three Crosses Hill. At more or less 5.30 p.m. Mario will lit the 15.000 lights giving life to his characters and the sky above Manarola will be colored by a firework on the sea.

The Nativity Scene will be lighted every day till mid January and the Cinque Terre National Park also plans guided walking tour through this very special vineyard. For further information and to check the detailed schedule, please check the Park official blog.

There are of course plenty of other events planned all around the Italian Riviera during the holiday season, but I wanted to tell you about something special and above all about someone special: a forever-young old man, whose passion is keeping him alive and that with tears in his (and my) eyes reminded me that money is important, but a satisfaction is something unbeatable.

3 Replies to “The miracle of the Nativity Scene”