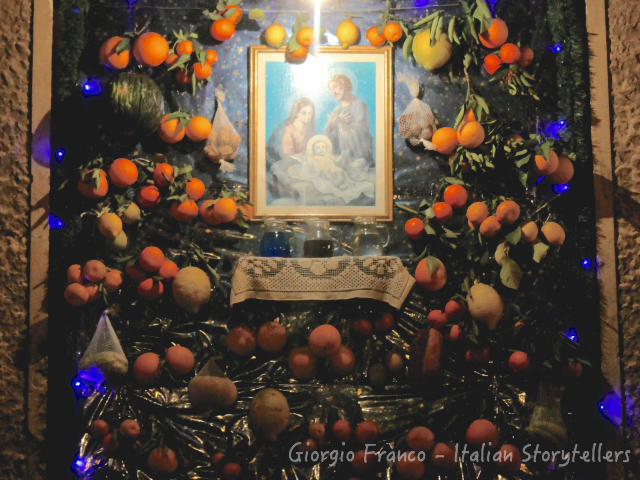 The tradition is the answer to the crisis

Christmas in Sicily is an ancient tradition. According to an old Sicilian song, Baby Jesus would come to the world in a small cot. In my region the custom of preparing the crib, dating back to the 16th century, was very common a well as the tradition of inviting the ‘sunaturi uorbi‘ (i.e. blind musicians in Sicilian dialect), who performed novenas and lullabies during the 9 days preceding Christmas.

Today, in these 9 days, on the exterior facades of the houses people use to compose a small altar with a central framework of the ‘Holy family’. Around the sacred representation are merely the fruits of our land such as a decoration: oranges, pumpkins, tangerines, lemons. They are also the fruits of the agricultural work, which represent a homage by the local families. One altar is realised by more than one family.

There are many hidden messages and stories that often pass by to the visitors. On the small altar the icon comes to life: in front of the image of St. Joseph is put a glass of water; in front of Jesus a cruet of wine; in front of the Madonna a cup filled with water, in which is dissolved few flakes of ‘heavenly stone’ or blue vitriol. The result is 3 colors: white, red and blu respectively simbolising Purity, Passion and Virginity. In fact St. Joseph is the symbol of innocence and purity. The Jesus’ blood was later paid for the redemption of Catholics sins. The water mixed with ‘petra azure’ in front of the ‘blessed among women’ is the immaculate character of the Virgin. In this way archaic meanings are still surviving.

The cities that primarily enrich these Christmas altars with citrus fruits are the biggest producers: Lentini, Scordia, Ribera, Palermo, Monreale, Ramacca, Calatafimi, Licata and many others. Above this altar on a wall is recreated a dome, a snowy sky: intertwined fennel branches and pieces of cotton. The cotton is meant to represent the raw material we will need to manufacture the shroud, which the faithful women will use to carry the Jesus corpse to the tomb; while the branches above the ‘Novena‘ mean the crown of thorns that wore Christ. Walking along the streets and the alleys you can admire these altars in the most beautiful corners of a square or set up on a wall or on a balcony.

This is one of the well-preserved traditions. Neither a fad nor an answer to the crisis. It is a centuries-old popular tradition finding new life among mixed races and dynamic youth.

Even the term ‘Novena‘ means a Christmas carol that in ancient times, during the 9 days before Christmas Eve, was executed in front of the crib by the ‘ciaramiddari‘, the players of wind instruments. The luthiers and bagpipers went around the town and were standing even before the ‘Putie‘, accompanied by the music of the Christmas cantatas that until 1867 were carried out at night. They were surrounded by the children of the neighborhood, who gathered to hear those sweet lullabies taking advantage of the occasion to eat together, singing a song that originally was a hymn of praise to the Holy Child.

The musical traditions related to the celebration of Christmas remained in Sicily particularly vital. With songs, instrumental music and dramatic actions to return each year to celebrate the Nativity: from November 29th, when the Novena of the Immaculate began, to January 6th, the feast of the Epiphany.

In the past, when the night before Christmas the faithful went to the church to attend the vigil, they brought food and sweets of any kind consuming them during the function. This custom was dramatically abolished by the Church that, in Palermo, on the 1647 Christmas Eve, avoided irreverent banquets during the celebration of Christmas.

From the beginning of the Christmas period to its end the protagonists of the festively decorated Sicilian tables are legumes, fresh vegetables and also vegetables preserved in oil, meats seasoned with Mediterranean herbs, free-range poultry, fish, including herring, wines, desserts and homemade liqueurs. For the Sicilian people is fundamental to use high quality ingredients, the best on the market: Avola almonds, Bronte pistachios, Ciaculli tangerines and oranges reach the palate of a demanding guests up to those living beyond Italian border.