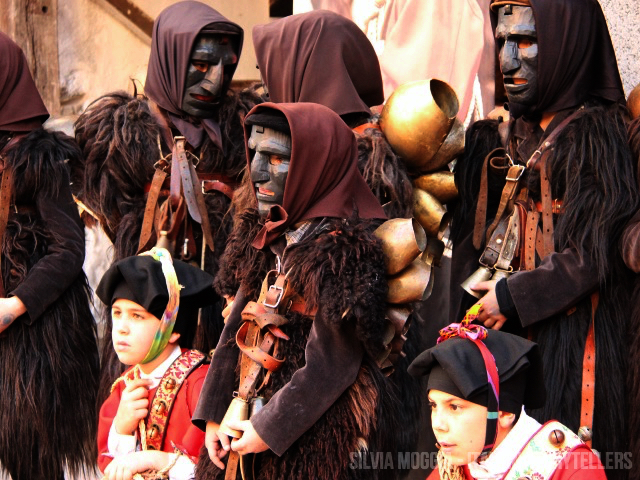 Come and experience the Sardinian Carnival

“Dance! Because carnival is coming
To shake our life
Then you can also forget
The major worries of the week
And the heart no, not surprised
And the death no, nothing to do
And the night will be invaded by the wind of spring
Are you happy?”

I chose to open the post with the chorus of the song ‘Carrasecare‘, written by the famous Sardinian group Tazenda, well known and appreciated throughout Italy.

On the island, people use the word Carrasecare (carra-de-secare), instead of Carnival, for this winter period that begins on St. Anthony’s Day (January, 17th) and lasts until Mardi Gras. Etymologically, the word means ‘to dismember living flesh’, this is linked to the fact that, unlike other areas of Italy, Carnival is intended as an event of death, which then leads to a rebirth following the continuous cycle of life.

The rites, connected to the agropastoral world, commemorate the Greek God Dionysus, killed and dismembered by the Titans. In some of these rituals, it is not rare to see men and women dressed in mourning, or scenes of capture and sacrifice of the animals, played by men with zoomorphic masks, symbolizing  the death of god and therefore fertility.

In this period also ‘sa Sartiglia‘, an horse race performed by masked horsemen who have to slip a ring (in the shape of a star) on, in Oristano, takes place.

Let’s see how we celebrate Carnival in some spots.

In this small village, in the province of Nuoro, the sounds of cowbells announce that it’s Carrasecare time.

In the days near the end of the Carnival, in fact, the mamuthones and issohadores become the masters of the place parading in a dance made of slow steps marked by the noise produced by heavy bells placed on their backs.

The mask of mamuthones is one of the most famous of Sardinia, is composed of  black velvet trousers and, a sheepskin fur, a female black handkerchief wrapped around the head, a black anthropomorphic wooden mask, rattles and cowbells lying on the back that can weigh up to 30 kg.

The issohadores, instead, wear a red waistcoat over white trousers and black leggings. On their face is placed a white mask and, over their head, lies sa Berritta, the Sardinian hat, tied at the chin with a handkerchief.

As decoration, they bring a colourful shawl, tied around the waist, a belt with bells and on their hand, they hold a rope they will use to capture mamuthones.

Su Battileddu, the victim, is the mask of the Carnival of Lula, a small town 40 km far from Nuoro.

This mask is made of a sheepskin fur, the face is black with soot and dirt of fake blood. Above the fur, the man wears cowbells and lower a stomach of an ox or sheep full of blood, while above the handkerchief for women, tied around the head, there is another piece of the stomach, between two goathorns.

During the rite, su Battileddu parades while characters with black face attack him until he died, then is put on a wagon where he rises. Even in this occasion is invoked the story of Dionysus.

In the Carrasecare of Ottana, a small village in the Barbagia of Nuoro, are proposed scenes of daily life of the peasant’s world.

During the parade, you admire 2 different types of masks in particular:

The Merdules try to ensnare the Boes that are walking, accompanied by the rhythmic sound of their bells.

A little bit different Carrasecare is the one of Santu Lussurgiu, in the province of Oristano. For the occasion, here takes place an horse race in the historic center of the village, along the Carrela ‘e Nanti, the dirt road from which the event takes its name.

The difficulty of the competition is in passing the tight corners of alleys, the narrow passages, downhill, at the same time the 2 (or 3) horsemen have to run keeping the horses side by side and making pariglie (acrobatics movements).

The jockeys, natives of Santu Lussurgiu, should wear a mask or have face painting.