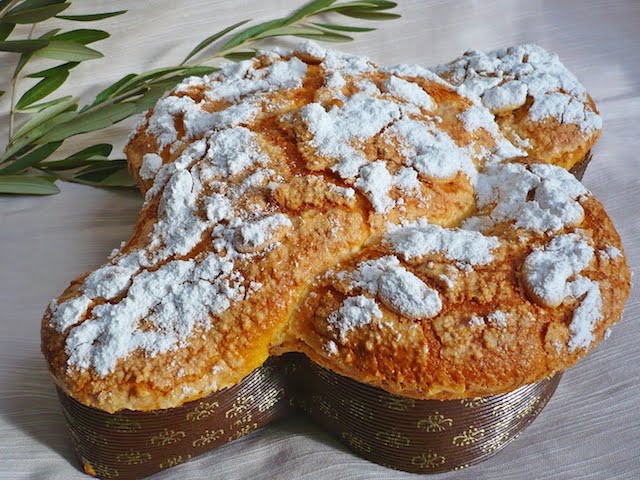 Region by region all the traditional Italian Easter desserts.

Writing this article was really hard. Are you wondering why? Well, Italy is like a kaleidoscope in every field depending on its history that sees our country fragmented for a long time. This fragmentation deeply influenced our traditions. Each region has its own history, but inside the region food traditions could be very different.

The difficulty to write an article about traditional Italian Easter desserts was that there are many typical Easter desserts within a region. You have this situation for quite all the most important events. Besides in some regions savoury dishes are preferred rather than sweet ones.

Here following there is a list of traditional Italian Easter desserts region by region from North to South with a short description.

This is one of the region which got me a lot of troubles. I didn’t find the typical Easter dessert and I don’t know if it exists at all. If you have ever been in this region during Easter, please let me know what kind of dessert did you eat. In the meanwhile you can read about what to do during Easter in Aosta Valley.

Coming from ancient time, the typical Easter dessert of Piedmont is Salame del Papa (i.e. Pope’s Salami). At the end of the preparation the dessert can be confused with a real salami. Probably the reason of this is connected with the fast of the Lent, because Catholic religion says to do not eat meat. That’s why chefs invented something similar to a salami, but prepared with butter, biscuits, cocoa powder and hazelnuts. Another common dessert is Persi al furn (i.e. baked peaches) stuffed with amaretto biscuits.

If during Christmas there are panettone e pandoro, Easter is the time of colomba. It is the Easter dove, that is the counterpart of the two typical Christmas desserts, pandoro and panettone. In fact the recipe includes the same ingredients (except for the candied orange and the icing), because of the creator is the same: Angelo Motta.

Fiadoni are probably German. Many chefs came in Trentino in 16th century during the Council of Trent. The word fiadone derives first from the latin word flado meaning inflated and then from German fladen. Don’t mix them up with fiadoni of Abruzzo, because these are salty but those of Trentino are sweet. Fiadoni are made of a dough stuffed with almonds, cloves, cinnamon, liquor (usually rum) and honey. It’s like a backed dumpling.

We already talked about Easter in Veneto region. Among the traditions we find the Fugassa. It is the dialectal word of focaccia (i.e. flat bread) and it is one of the Easter bread made in the Holy Week. The legend tells that a baker in Treviso kneaded a dough until he obtained a fluffy cake to give it as a gift to his customers. There is another legend telling that Fugassa was prepared for the engagements putting inside the ring and was offered to the woman’s family. The process is not so simple because of the long leavening.

Although is another region, the cake prepared here for Easter is similar to that one of Veneto. The Pinza pasquale is a sort of bread, not too much sweet so that you can eat it with jam or filled with cold cuts. It comes from the farming culture of Trieste and has a particular shape which reminds the martyrdom of Jesus. The tradition wants to not slice the pinza before it is blessed. Nowadays it is very hard to find it in a bakery or in a shop.

If you are here during Lent, you have to taste the quaresimali (Lent is Quaresima in Italian). These were created by Augustinan nuns of San Tommaso in Genua for the high priest visiting them. In the Lent period it is forbidden eating meat, so the nuns thought to remove any animal fats and prepare biscuits with almonds, sugar and water.

On the tables of Emilia-Romagna the dolce salame (i.e. sweet salami) couldn’t miss on Easter day. It is very simple to make it and you don’t need to cook it. The ingredients are biscuits, butter, eggs, sugar and cocoa powder. You just put into the freezer for 2 hours and when you take it out you can immediately slice it.

The typical dessert of Easter time in Tuscany is schiacciata. Originally it was created by a person living in Livorno and from here it was spread throughout Tuscany. The schiacciata was prepared from the Lent until Pentecost and it consists in dough for bread adding egg, sugar and flavourings. You can put jam or chocolate spread on it.

The variety of Easter desserts is present in Lazio too. You can find maritozzi quaresimali. They are typical in Rome and are prepared during the Lent. Maritozzi are similar to little sandwiches with raisins, pine nuts and candied fruit. In the Middle Age people ate them to compensate for the fast. The habit was that men gave them as a present to their fiancée hiding under them gold jewels. Outside Rome during Easter you can also eat pigna, that is originally from the southern area of Lazio, called Ciociaria.

Are you now feeling like Homer Simpson in front of his doghnuts? Well, I wait for you to the 2nd part of this yummy list!