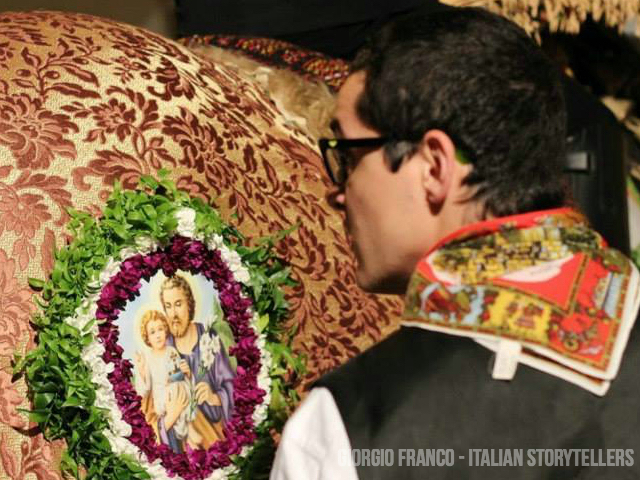 A tribute to the colours of spring.

The public cult and liturgy of St. Joseph is relatively recent, against the veneration present since the first centuries of Christianity. Two different traditions face off in Sicily: the east and western parts.

The first is essentially based on the ancient history of Joseph the Carpenter, already widespread in the 4th century, about translations from Greek and Arabic. This story explains the establishment of a holiday celebrated by the Copts monophysites Egyptians, to commemorate the death of St. Joseph on July 20th

The construction of the tradition in the centuries has reached a phase of accuracy. If we observe the feast of St. Joseph through these diverse ritual moments dedicated to the celebration of the saint, we have confirmation of the stratification of the two traditions. In fact, in Sicily the time frame in which the Patriarch is celebrated is from January to September. This time period includes all the dates of the liturgical tradition. For example one of the commemorative processions of the Saint is held on 17th July in Erice. There is a corporation of joiners, carpenters and coopers leading into procession a small statue of St. Joseph. This date takes us back in full to the Eastern tradition that puts in July (20th) the death of the Saint.

The sacred representations of the feast of March 19th are performed in many places of Sicily, known as ‘Flight into Egypt’. Parts of St. Joseph or functions reproduce the reference and the dependence on the tradition of oriental apocryphal texts. In them the figure of St. Joseph appears modeled fact of that provided by apocryphal literature in which the Patriarch is presented as an old man with a long white beard. St. Joseph is the result of various traditions, liturgical and not. In fact, they remind to a substrate consisting of pre-Christian origin.

Altars and ‘living’ processions are typical and these pay homage to St. Joseph. From Trapani to Scicli: Lentini, Licodia Euboea, Castelvetrano, Troina, Pozzallo, Polizzi Generosa, Enna, Ragusa, Caltanissetta, Bordonaro, Santa Croce Camerina and many other Sicilian cities. So in Alcamo, Castellammare del Golfo (and other places in the area), yet at the end of the 50s, during the patronage of the Saint, celebrated on the 3rd Sunday after Easter, are documented the ‘virgineddi‘, that are the grand banquets offered to poor, organized by the congregation of the Holy Family.

Even in Salemi, but on March 19th, until the middle of the last century it was getting ready a grand dinner in Piazza Municipio. The banquet is preceded by a parade composed by the Holy Family and a row of children on their way to hand dishes. Similarly in Lentini, the procession made up of 3 actors (St. Joseph, Mary and the Holy Child) arriving in the square where a banquet is simulated and it takes place a charity auction. Furthermore in the same city is prepared, in the church of the Fountain, a banquet for the poors of 99 dishes, 3 dishes per meal.

Another example is the St. Joseph’s riding (Cavalcata di San Giuseppe), one of the most popular traditions in Scicli, a little town near Ragusa, in the south-east part of Sicily. The feast dates back to the medieval period. It was held at the beginning of spring to propitiate the harvest. Afterwards it was dedicated to St. Joseph and the flight into Egypt of the Holy family.

During the ‘Cavalcata di San Giuseppe‘, at the end of March, the horses of Scicli are dressed up with hundred of flowers. The horses are covered with a mantle of hoary stock flowers, woven on a frame of jute (a time on twisted palm branches). The flowers form Holy paintings.

The beautiful image of this uninterrupted sequence of traditions overflowing with stories, which for several days crosses all the Sicilian cities, is reflected in the abundance that the region boasts.

I suggest the following celebrations of St. Joseph in Sicily during the month of March: