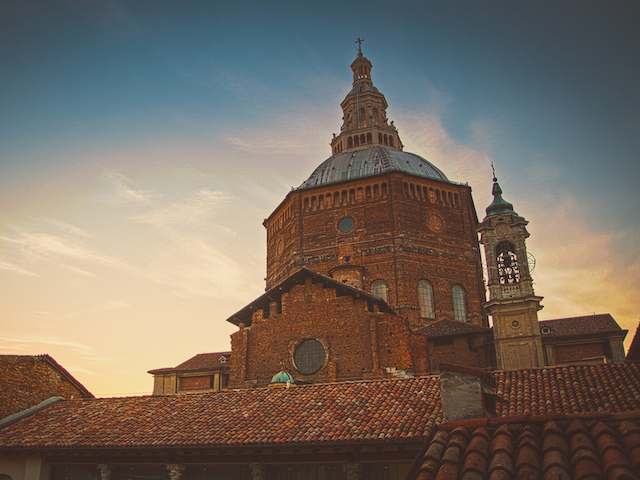 Only 45 km south of Milan, the city of Pavia is highly recommended.

iReachable in less than an hour by car and half an hour by train, it’s the ideal spot for a day trip from Milan city.

But – if you have time – consider also a full weekend because Pavia has a lot to offer and may surprise you. Placed along the river Ticino, near the confluence with the Po river, in the middle of a fertile plain devoted to agriculture (mainly wine, grain and rice colture), Pavia has also plenty of green areas, hills and natural parks all very enjoable.

But first of all a bit of history

Pavia has probably pre-Roman origins; it was called ‘Ticinum’ under the Romans. In the year 572 it passed under the Longobard rule, of which became the capital of the kingdom, then was conquered by Charles the Great and annexed to the Duchy of Milan, ruled by the Visconti family, since 1360. In the Middle Ages it became the seat of one of the oldest and most prominent European universities. Maria Theresa of Austria and Joseph II gave a great impetus to the fame of the university: they extended its headquarters and called great academic professors of that time like Alessandro Volta and Lazzaro Spallanzani.

Its ancient origins and a past of great importance led to Pavia’s remarkable artistic heritage, well preserved still nowadays. Pavia is a small and charming town, to visit on foot, calmly resting in some nice cafè, maybe enjoying the famous Paradise Cake or Chocolate Cake dedicated to the patron saint of the city, Saint Sirus.

What to see in Pavia

The visit starts from Piazza della Vittoria, the main square in the city. In its basement there is the underground market, the Broletto, where town meetings were held and where justice was administered, now the City Town Hall.

From Piazza della Vittoria you immediately see the dome of the Cathedral, the most imposing church in town, in Renaissance style, with the remains of St. Sirus, first Bishop of Pavia. Built in 1488, it counts among its architects Leonardo Da Vinci and Bramante.

The church of San Pietro in Ciel d’Oro, dating back to the early VI century, is one of the most beautiful monuments of the 14th century Gothic. It is mainly known because houses the remains of St. Augustine, Doctor of the Church, who came from Sardinia under the reign of King Liutprand in the VII century.

Another church you just can’t miss is San Michele Maggiore, the most important Medieval building in Pavia. A masterpiece of the Lombard Romanesque style, this church hosted some lavish ceremonies and coronations, like the coronation of Frederick I Barbarossa in 1155.

In a 10-minute walk from Piazza Vittoria you reach the Visconti Castle. Built around 1360, it was much more a private residence than a fortress. After having been used as military barracks, in the early XX century it was purchased by the City and now is the seat of the Civic Museums that extend for 8 hundred square meters, with various sections, among which the Pinacoteca Malaspina, the art gallery of the city. The courtyard houses elegant mullioned windows while of the frescoes that decorated the halls, arcades and loggias of the castle there are nowadays only a few fragments. In the latest years, in the castle and in the coutyard various exhibitions and summer concerts are held.

The historic city center of Pavia lies on the left bank of the Ticino, while on the right bank there is Borgo Ticino, a neighborhood that was originally outside of the city walls. The two are connected by the Covered Bridge (also known as Old Bridge), dated 1351-1354, one of the symbols of the city. Borgo Ticino, with its colorful houses along the banks, preserves its characteristics of a simple fishing village of old times.

A true masterpiece: Certosa of Pavia

But your visit of Pavia is not complete if you don’t go visiting the Certosa, a real masterpiece of the Renaissance in Lombardy and UNESCO World Heritage candidate. In the two centuries used for its construction, the best architects, sculptors and painters of that time such as Bernardo da Venezia, former designer of Milan Cathedral, the Mantegazza, Bergognone, were involved.

Certosa of Pavia is a historical monument (actually one of the most important in Italy) that includes a monastery and a shrine, 8 km from the city centre. The Certosa of Pavia was built, starting in 1396, by Gian Galeazzo Visconti as funerary chapel for his family; the monastery was completed in1452 and the church in 1473, its fabolous facade was erected only afterwards,

Once the Certosa was directly connected to the Visconti Castle through a wide hunting park that stretched for about 10 kilometers. Now part of the park is still there, but no longer connected to the castle: it’s called Park Vernavola, now an oasis for fauna protection.