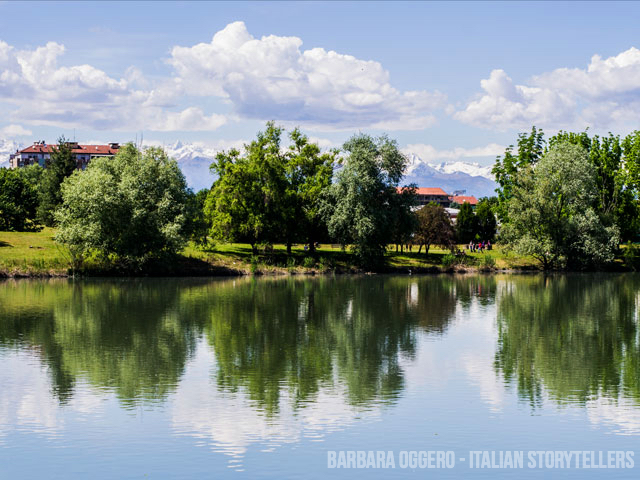 I remember the revelation when, at elementary school, the teacher explained to us the origin of the name of the Italian region where we lived: Piedmont. It comes from Latin Pedemontium and means ‘at the foot of the mountains’ to define so the territory surrounded on three sides by the Alps to the east and north, and Ligurian Appennines to the south. The mountain, in Piedmont, is known for its looks that quickly descendes from a height over 4,000 meters to the Po Valley.

Natural beauty and sports areas, the mountains of Piedmont – from the area of the 2006 Winter Olympics games to the Gran Paradiso National Park – are great for hiking, mountain biking, skiing and snowboarding, or just to look at nature. Po, Italy’s longest river, is born from the Monviso Mount and then crosses the region from west to east, continuing its journey to the sea.

Speaking of water, Piedmont is rich of mountain lakes among which Lake Maggiore, one of the largest in Italy. Also remarkable, always located in the north, are Lake Orta, with the picturesque island of San Giulio in the middle, and Lake Viverone. On each of these ponds of water you can enjoy an amazing holiday, devoting to cultural tours or sports and recreational activities.

Piedmont is also known for its hills. In addition to the Canavese area (north-west), with the morainic amphitheater of Ivrea glacial dating back to the Quaternary period, and to the hills of Tortona (south-east), the soft scenery dotted with the vineyards of Langhe and Roero has now become World Heritage Site. This generous land is famous for its wine, truffle and hazelnut, foods celebrated in seasonal fairs.

But Piedmont is also a land rich in history and art. From Turin, the 1st capital of the Kingdom of Italy, where palaces and castles of the 17th and 18th centuries, built by the royal House of Savoy, are now open to visits and enclosed in a route called ‘The crown of delights’. Built in Baroque style, in the regional capital city it is possible to trace many examples of this architectural expression, from the Royal Palace to Palazzina of Stupinigi, from the Chapel of the Holy Shroud to Basilica of Superga. The apotheosis of magnificence is reached, however, in the Palace of Venaria, an impressive building inspired by Versailles, in France.

Baroque and Romanesque are the two architectural styles that tell more about the history of the region. The monuments of Romanesque style are located along the ‘Via Francigena‘, a reborn path of pilgrimage that crossed the Alps from France and passed through Susa valley, touching two of the most interesting places in Piedmont: Sacra di San Michele, a beautiful Abbey of the 10th century, and the Abbey of Novalesa, of the 8th century. Other examples of the Romanesque style are found in Staffarda Abbey, a few kilometers from Saluzzo (Cuneo), in Vezzolano, Albugnano (Asti) and in Santa Giustina in Sezzadio (Alessandria), one of the most important shrines of the entire region.

Castles remember the real past, but also there are authentic villages of Italy and the most beautiful villages in Italy, where the rural life shows its romantic side between houses made of stone or wood. Remember those names: Levice, Bergolo, Cortemilia, Saluzzo, Candelo, Nieve, Garessio, Macugnaga, Usseaux, Mombaldone when you want to stay between the silent alleys and fountains gushing spring water.

In the end, do not forget to taste food and wine. The recipes can be divided into 2 categories:

In the first case the dishes were served at the royal court banquets and are: chocolate, eggnog, the rack of boiled meat and fried mixed (posing together salty foods and sweets); rural tradition recipes are made with simple ingredients like panissa (a risotto with beans and bacon), bagna cauda (a cream made of garlic in which to dip the vegetables) and finanziera (offal stew). Not to forget the typical sweet, bunet, a pudding with cocoa and hazelnuts.

Only after visiting the ground and tasting its specialties you can say that you have shot the essence of Piedmont.