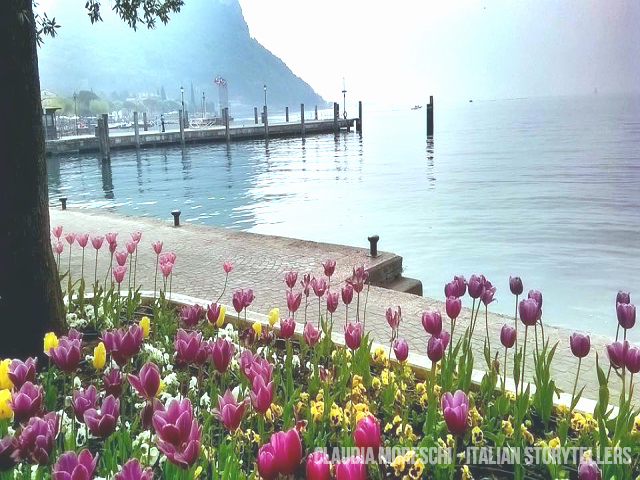 The water, the artists and the village.

Italy’s largest lake, blessed with a mild climate, a varied and airy landscape, with Milan to the west and Venice to the east, remains quite uncelebrated, overshadowed by Lake Como with its famous gardens, villas and Hollywood aura.

Lake Garda has always been a destination for distinguished visitors, from artists to politicians, sovereigns and musicians, bewitched by the beauty of Lake Garda.

Writers have sung Garda’s praises over the centuries. The northern points of Lake Garda charmed Goethe, who called the view ‘a precious spectacle’. DH Lawrence lived for several months in Gargnano. ‘The lake lies dim and milky’ Lawrence wrote, ‘the mountains are dark blue… the sky glistens… the light burns gold’. Lawrence wrote about the ‘exquisite scent of lemon flowers’ and described the ancient limonaie – huge greenhouses with removable roof planks to protect the trees in winter. According to Virgil ‘the waters could heave with waves and roar like a sea in tempest’. One of Tennyson’s poems began with ‘Row us out from Desenzano’. In 1921 Ezra Pound wrote to James Joyce from his hotel in Sirmione ‘Dear Joyce, I’d like you to spend a week here with me. The location is well worth the journey – both Catullus and I can guarantee it!’. Shortly before dying Maria Callas told a friend how much she missed Lake Garda – over the years she retreated regularly to her villa on the lake to escape from the stress of the limelight.

One of my favourite spots in Lake Garda is the area around Garda, a tiny village 30 km from Verona that is so lucky to bear the same name of the lake (meaning ‘guard’, alluding to its fortress erected during the Barbarian invasions).

The village lies by the lake and is located in the middle of a charming gulf jutting up to Punta San Vigilio (Point of St. Vigilius) and Baia delle Sirene (Bay of Syrens). Since the Longobard period, the village is dominated by the fortress. All around the village are hills covered with olive tree groves and vineyards, villas and naturalistic trails suitable both for hiking and cycling. Along the lake the pathway makes it possible to reach Bardolino and Lazise to the south and Punta San Vigilio to the north.

Garda is a charming place to visit during your trip to Lake Garda.

A typical day in Garda starts with a stroll along the lake, a stop for a coffee or lunch in one of the many bars and restaurants overlooking the lake, or an aperitivo at the touristic port, where there are also the headquarters of one of the most important rowing schools in Italy.

In summer many go to La Cavalla beach, where you can rent a sundeck and sunbathe by the lake. The waters of the lake here are particularly clear: this is the right place to have a swim during a hot Summer day.

While in town make sure not to miss the pieve, the Romanesque parish church, one of the oldest in this area, dating back to the X century, and the Church of St. Stephen, of the XVII century. Also do not miss the historical center, with its old buildings, its many alleys and shops. This is the right place also to buy local food products like olive oil, wines, spirits and much more.

But do not leave Garda without paying a visit to Punta San Vigilio, one of most charming places of Lake Garda. Belonging to the Counts Guarienti di Brenzone, it makes up a small peninsula to the south of the Garda Gulf and comprises of a villa, a small church, an historical inn, a small port and the Bay of the Syrens, a beach plunged into a lush garden.

Punta San Vigilio has been a favourite destination of the Duchess of Parma, the King of Naples, Emperor Alexander of Russia, Winston Churchill, Otto Hahn and his wife, painter Edith Junghans, Laurence Olivier, Vivien Leigh and Charles, Prince of Wales.

During my stay in Garda I had the chance to spend 3 amazing days at Poiano Resort, a cozy hotel and residence set in a 60-hectare area of Mediterranean green park. With apartments of different types and many lodging solutions, a wide range of sports activities (swimming pool, tennins, football, beachvolley, fitness, archery, kids playground, miniclub) as well as a beautiful spa (and last but not least its helpful and friendly staff), this can be the right place for a vacation in Lake Garda, both for families and couples. The view you’ll enjoy from the hill of the Poiano Resort will be one of the most beautiful memories of Lake Garda.