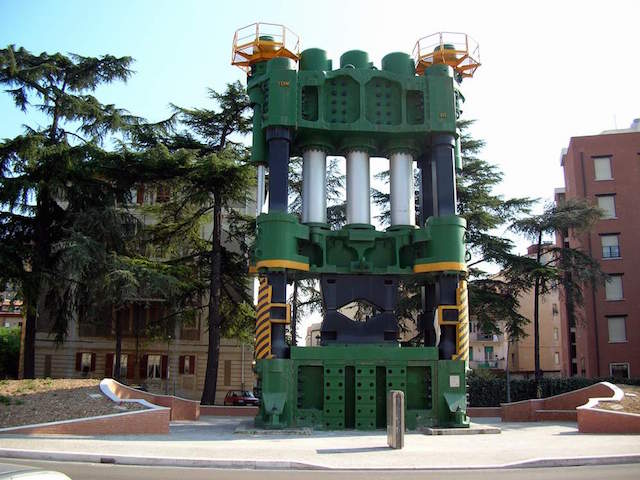 You don’t know the real essence of Terni until you don’t discover its steel character.

Terni’s steel production represents one of the most important industrial traditions in Italy since the end of the 19th century: the town extended its borders outside the historical nucleus defined by the natural limit of Nera river and the ancient walls, and changed deeply along with its new economic and social structure.

Old factories have been now converted into spaces for different uses and several contemporary monuments show the modern face of the city.

Piazzale dell’Acciaio is the modern gate to Terni, and when you go into the city the first thing you see is the Hyperion, an impressive iron totem sculpted by Agapito Miniucchi characterized by its rusty surface due to atmospheric agents.

According to the Greek mythology Hyperion was one of the 12 Titans, this giant god symbolizes the greatness and the majesty of the city of steel. Its shape reminds the wide valley which contains Terni and the base under the sculpture deceive us: it looks like it could swing on it!

If you arrive by train, the first steel monument you see – situated in a square just in front of the railway station – is the Pressa, the Power Hammer: it operated in the steelworks since 1934, when the Italian government committed it the fitting of a new navy battle fleet.

Its contribution was decisive both for military and civil production: after the II World War, the Pressa was used for heavy industry plants, and when it was dismantled in the ‘80s it was saved from the destruction and exhibited as monument of industrial archeology, symbol of man’s conquers but also tangible testimony of Terni’s industriousness.

Another symbol of Terni’s industrial heritage is the obelisk called Lancia di Luce, (i.e Spear of light), standing at the end of Corso del Popolo: it shows the geniality of one of the most important contemporary Italian sculptor, Arnaldo Pomodoro, whose works are exhibited in some of the main museums and squares in the world.

The Lancia was built in 1995 in order to celebrate the centenary of the steelworks production: it was realized in steel, iron, chromium, copper, nickel and brass and ravaged by cracks and fissures which change its shape and colors. Its structure evokes the sequential phases of metal processing and, in the same time, pays homage to the evolution of humanity’s history and its technological progress.

This monument obviously represents a praise to Terni, city of steel and industry: Arnaldo Pomodoro described it as an hymn to work and its symbolic and concrete materialization.

Piazza Tacito and its fountain

In the city centre, Piazza Tacito represents the heart of the industrial town’s urban development and the imposing fountain is dedicated to water, the essential element which allowed its first industrial development, assembled to the impressive steel needle which stands out against the sky, representing the industrial and dynamic essence of Terni.

It was built in 1936 by the architects Mario Ridolfi and Mario Fagiolo, while the basin was decorated by Corrado Cagli, who created a beautiful mosaic representing the signs of the zodiac, as symbol of the succession of seasons and the role of water, that favored the industrial development thanks to its energy.

During the II World War Terni was seriously damaged by bombing and even this fountain had heavy losses in 1943; the reconstruction was looked after the public works office and the mosaic’s restoration was entrusted to Cagli, which replaced the previous Venetian mosaic with the Roman one.

A few steps away from this square, along Corso Tacito, stands another sculpture called ‘Composizione di Forme‘, built in 1980 by Umberto Mastroianni (uncle of Marcello, do you know?) as praise to art and sculpture; the material is a repeal to the town’s history.

It’s an abstract monument made of the alternation between full and empty spaces, representing the working class and the use of machineries for the production, but it also wants to remind that present is open to the future and our life is connected to the space where we live our stories.

Another meaningful steel monument is placed in front of the stadium and it’s dedicated to Libero Liberati – a motorcycle racer and the 1957 500cc Grand Prix World Champion, who was born in Terni in 1926. He prematurely died in a fearsome road accident in 1962 and the Motoclub decided to celebrate him with this statue, built by Carlo Lorenzetti in 1991: it’s an abstract geometric work composed by two bent cut sheet steel which remind the curves of a circuit and the sinuous movements of the racer.

There’s one more interesting example of industrial archeology in Terni: the CAOS – Opificio SIRI Art Centre – is housed inside the old SIRI plant buildings, the ironworks founded in 1793. It produced synthetic ammonia and other chemical compounds and it was specialized in experimentation and scientific research until its closing in 1983.

Nowadays, CAOS is a cultural centre of 6000 m² built in 2002 and houses the museum of Modern and Contemporary Art, a theater, an art gallery, the archeological museum and several poly-functional areas used for cultural events.

If you arrive by car, you can park in the large parking of the old Officine Bosco plants near the railway station and the bus terminus; from here you can easily reach the Pressa by feet and then continue towards the town centre going along Via della Stazione, that leads you to Piazza Tacito and its fountain.

Go straight on along Corso Tacito, up to Piazza della Repubblica and Corso del Popolo ahead, where you will meet the ‘Lancia di Luce‘ on your way.

If you cross the Nera river along the iron bridge and turn towards the metal stairs immediately on your left, you find a panoramic street on the river: follow the parallel Lungonera Savoia and cross the rotary to arrive at the CAOS centre.