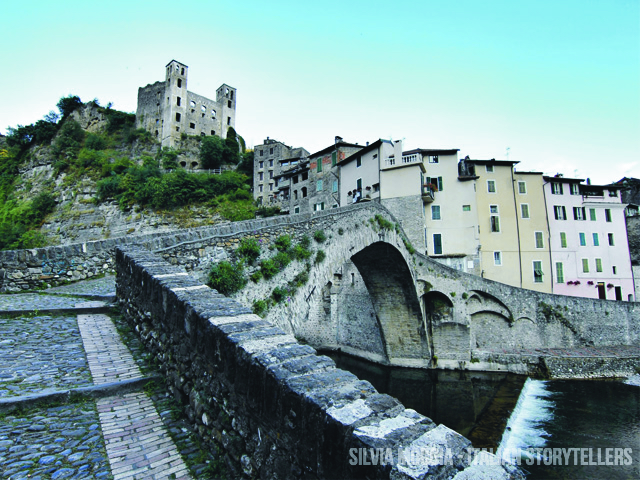 To visit a village following an artist footpaths is always something a bit magic, but when the place itself is amazing, well it’s an experience not to be missed!

Dolceacqua is a fairy tale village with a modern part, Borgo, and the ancient one, Terra, linked to one another by a beautiful Roman bridge on the river Nervia, that Monet painted several times. One could think that it was simply designed to add a beautiful note to Dolceacqua and that only once built people realized that it could also be used to cross the river to reach the medieval Doria castle dominating the village.

Once on the other side of the river you find yourself in a web of tiny narrow alleys, the so called carruggi, topped by impressive stone arches connecting the building to one another following the true Ligurian tradition. The Genovese style doorways are all different and their friezes make me slow down.

Getting lost in this labyrinth is one of my favorite hobby. Strolling around I can’t help but imagine Claude Monet doing the same thing to find the perfect spot and the right light… and actually the light here is amazing. Shady pastel tones mixing with the dark stone and the reflection of the river. Really, fairy village is a perfect definition.

At the top of the hamlet there is the fortress built during the XIII century starting with the tower and then developed during the following century by adding the defensive walls. During the Renaissance, as many other Italian castles, even the Dolceacqua one was embellished with frescoes and for the time trendy furnitures becoming a fortified manor house. It was then almost destroyed by both the French and the Spanish armies fighting for the Austrian Succession and by an earthquake in 1887, but although in ruins it’s impressive and so beautiful.

In addition to these historic sites, Dolceacqua is well know for its red wine, the aromatic and sweet Rossese and for its extra virgin olive oil, the Riviera Ligure I told you about in my dedicated post.

The village is also surrounded by lots of greenhouses filled with roses, brooms and mimosas daily sold in the famous flower market of San Remo.

Oh, in Italian Dolceacqua means ‘sweet water’, but this has nothing to do with the origin of the name… there are actually 2 different schools of thought: