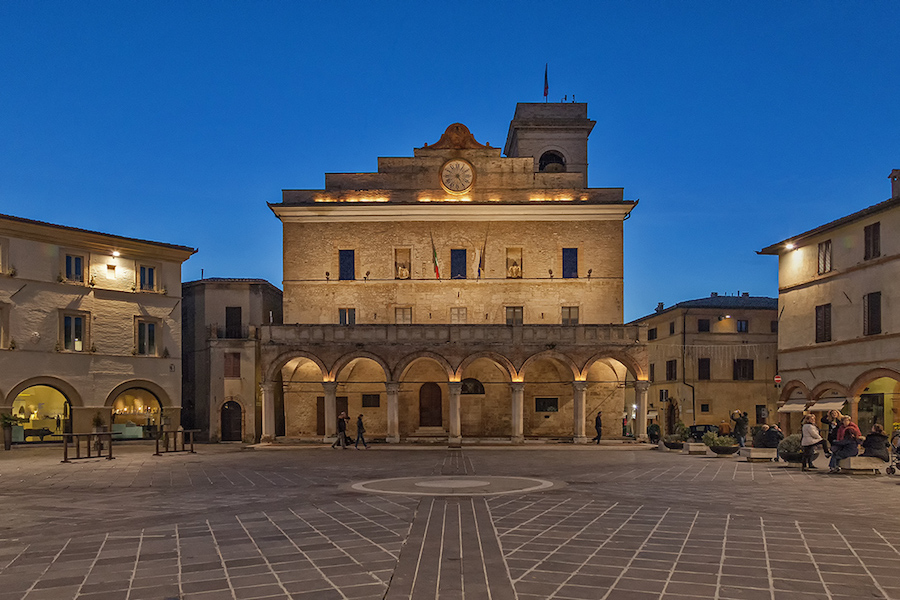 Last week I talked about the 5 medieval villages of the Middle Tiber Valley. Now we move to another area in Umbria region.

Valle Umbra is a fertile valley characterized by its beautiful countryside, the excellent wine, oil and food specialties and a multitude of small towns which perfectly conserve rich traces of their past through fascinating medieval narrow ways.

This valley houses 2 main cities, Foligno and Spoleto, but I would like to present you all that little villages that, despite their reduced dimension, offer impressive treasures and excellences in all respects.

This small, delicious medieval town, probably born with the Roman conquer of Umbria, is surrounded by ancient walls built between 1249 and 1377 over the ancient roman ones, and the street that crosses the city centre at full length retraces the way of Via Flaminia.

One of the most interesting places to admire the Roman signs of the town’s history are the thermal baths, situated inside a house on the right of Porta Guelfa: it contains 3 rooms in opus mixtum and another one decorated with a beautiful black and white mosaic, representing sea creatures like lobsters and a seahorse hunted by a newt.

The highest spot of Bevagna houses the church and convent of San Francesco, built in the second half of the 13th century, with its elegant portal on the façade and important artworks inside, just like paintings of Dono Doni and some frescoes of the 16th century; the inner part was completely restored in the middle of the 18th century, in Baroque style.

Near the altar you can also admire the stone where San Francesco put his feet during the so-called ‘preaching to the birds’, when all these birds listened to the Word of God and celebrated it spreading their wings and stretching their necks.

The main centre of the medieval and current town’s life is Piazza Silvestri, a typical square with irregular shape surrounded by the most significant buildings: Palazzo dei Consoli, built in 1270, that houses the Torti Theatre, the Romanic church of San Silvestro with its poor interior and, opposite of it, the church of San Michele, built between the 12th and the 13th centuries and characterized by 3 portals with frescoed lunette and a majestic later bell tower.

Have a stopover at Palazzo Lepri, built at the end of the 18th century by Andrea Vici according to the project of Valadier; it houses the municipal hall and the civic museum of the town, organized in 3 sections:

The gentle and sinuous hills which surround Bevagna are covered with olive groves and excellent vineyards for the production of DOCG Sagrantino wine: if you’re a wine lover, here you can visit the Carapace built by the great contemporary architect Arnaldo Pomodoro, the first sculpture in the world to be used for living and working. The Carapace, in fact, houses the 30-acre-estate of Castel Buono, which extends between Bevagna and Montefalco.

This town is well-known in the world thanks to its fine wine, the Sagrantino; the connection between this territory and its wine is really strong, and you can discover it walking through the ‘Strada del Sagrantino‘, a cultural gastronomic route where you can taste all the food and wine specialties and buy them.

Montefalco is also called the ‘Ringhiera sull’Umbria‘ (i.e. The railing on Umbria) because of its enviable position on the top of the hill, which allows a breath-breaking view on the whole valley from Perugia to Spoleto.

Among spectacular panoramas, charming medieval alleys decorated with lots of flowers on the balconies, great artworks and excellent food and wine, Montefalco is the perfect place to have a relaxing and inspiring walk.

During your stay in this adorable town, take your time to visit the church of San Francesco: it was built by Franciscans between 1335 and 1338, and nowadays it’s the seat of an interesting Pinacoteca with important paintings by Perugino and the cycle of frescoes dedicated to San Francesco’s life, painted by Benozzo Gozzoli.

The road where the museum is, leads to a nice circular square surrounded by elegant noble buildings of the 16th century, the church of San Filippo Neri (which is a theatre) and the Municipal hall.

Just like the other towns, Spello is a small village with a huge charm: inside the surrounding medieval walls, built in 1360 on the previous Roman ones, there is a network of narrow streets full of old houses, that will fascinate you with their warm colors, wooden doors, terracotta tile roofs and masses of blooming vases on the balconies and windows.

During your hypnotizing walk you will find the church of Santa Maria Maggiore, erected on the ruins of a pagan temple dedicated to Giunone and Vesta; particularly interesting is the Baglioni Chapel, decorated by Pinturicchio with frescoes representing scenes of the New Testament, and the floor, adorned with majolicas from Deruta in the 16th century.

Our last stop is Trevi, a classic Umbrian hilltown founded by Romans along the Via Flaminia, perched on a sloping terrain, which gives you an extraordinary overview on the surrounding countryside.

A double medieval circuit of defensive walls encloses a labyrinth of narrow streets and almost 20 medieval churches; the most important one is the Duomo of Sant’Emiliano, a Romanesque building edified in the 12th century and radically rebuilt in the second half of the 18th century.

Very close to Trevi, there is an amazing place that you can’t miss: the springs of the river Clitunno, that rises along the ancient Via Flaminia. We are going to talk about the springs in the next days. The Clitunno Springs were considered a sacred place by Romans, that used them to consult the Oracle of god Clitumno, and built there a little temple that was later converted into the early Christian church of San Salvatore.

Thanks to the beauty of the landscape and the incredible clearness of the water, the springs were celebrated even by artists, like Byron and Giosuè Carducci; its current aspect goes back to the second half of the 19th century, after the interventions wanted by Count Paolo Campello della Spina.