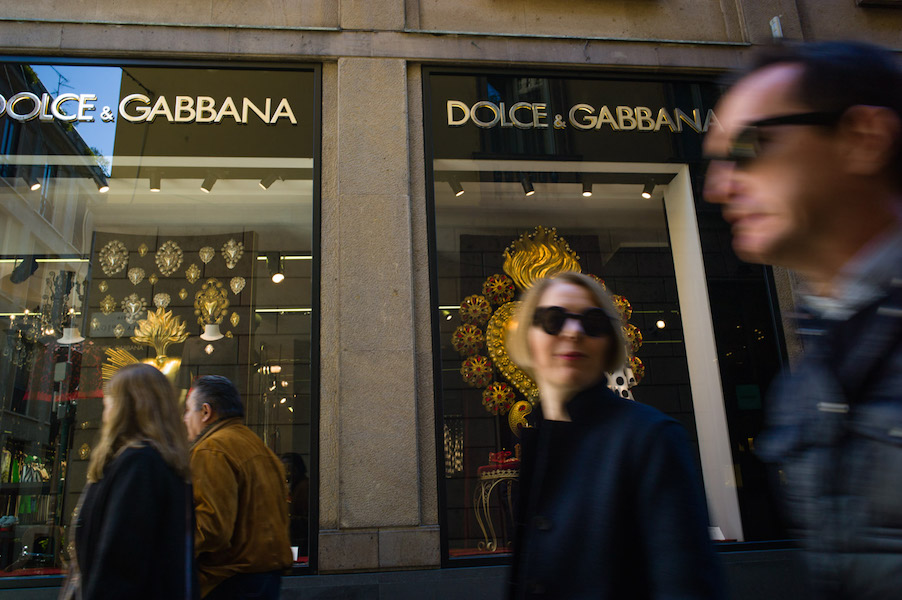 Which are the best shopping streets in Milan?

Milan is the Italian shopping’s paradise, a wonderland for fashionistas always looking for the latest trend piece. With most of Italy’s fashion brands represented in the city Milan is one of the world’s fashion capitals. All the world-famous fashion houses would like to have their shop in this city, which is the most important Italian financial centre.

Along with show rooms and ateliers, you will find fine jewellers, design boutiques, trendy home furnishings and much more.

People come from all over the world just to watch the shop windows or step into a shop admiring the designed-to-impress interiors. Only the luckiest people can buy clothes or accessories. Armani, Versace, Dolce e Gabbana, Fendi, Bottega Veneta, Gucci, Valentino are just few names you can find in the city.

The best shopping streets in Milan can be summed up in one word: ‘quadrilateral’.

Why this word? Because the fashion hub in Milan is a block – the quadrilateral – formed by 4 streets: Via Monte Napoleone, vVia Alessandro Manzoni, vVia della Spiga and cCorso Venezia.

This is the most important street for shopping and it can compete with the Fifth Avenue in New York and the Avenue des Champs Elysees in Paris to be one of the most expensive streets in the world. If you are looking for celebrieties, the chances are high that you will see them there.

Its name dates back to 1804 during the Napoleonic domination when here there was an institute which controlled the national debt. At that time, Milan was already a city attracting foreigners from different countries, but it is only in the 1950s that the street became one of the world-famous shopping streets.

In the 19th century it housed well-known artists. Giuseppe Verdi composed his opera Nabucco there in 1840. Via Monte Napoleone was the headquarter of partisans during the ‘5 days of Milan’ uprising, a historical moment of the Italian insurrection against Austrian rule.

At the end of 19th century, the street started to become a street of luxury when important families moved there and jewellers opened their shops near to theri well-off clientele. Annibale Cusi was the official jeweller of the Savoia family, the last reigning family in Italy.

The other shopping streets

Via della Spiga is a relaxing street because here cars are not allowed unlike via Monte Napoleone. The origin of its name is quite uncertain. While you walk vVia della Spiga don’t forget to pay attention to its buildings which date back to the 1950s when architecture in Italy was influenced by the Rationalism school.

Since 1874 Via Manzoni has been carrying the name of one of the most important Italian novelists born in Milan: Alessandro Manzoni. Previously called Corsia del giardino it used to be the most elegant street in Milan and in Europe at the beginning of the 19th century. The street is as much important as the place where it starts: pPiazza della Scala, home of the world-famous opera Teatro alla Scala. As many of Milan’s important streets it follows the ancient Roman street.

Inside the Quadrilateral there are other shopping streets, like via Borgospesso, via Santo Spirito or via Bagutta, with marvellous buildings to visit. For example in Palazzo Morando along via Sant’Andrea you can watch movies about the history of fashion.

Beyond the best shopping streets in Milan

If you have not enough money to buy branded clothes, you will find a variety of shops along Corso Vittorio Emanuele for all budgets. I remember when I was there some years ago. It’s like a theme park only for adults because of shops you can find there. If here you can buy affordable clothes or accessories, it is not the same thing when you stop at a bar or a coffee. Do not forget you are in the very centre of Milan and this is the most expensive area.

It was the first pedestrian area in Milan in the mid-80s and one of the most important streets of the city since Roman time. You can stroll under the arcade obtained during the reconstruction of the buildings after the II World War.

Via Torino was the location of artisans and workshops and today it is still a shopping destination. Porta Ticinese, one of the six ancient city doors, is the right place if you are looking for vintage clothes and something original. Via Savona is a redeveloped street with many buildings made of iron and bricks. It is a point of reference for design lovers.

Fashion Week and other fashion events

Put in your agenda the Milan Fashion Week with 2 appointments (Sep/Oct and Feb/Mar) to see in advance which are the fashion trends for the following season. It is one of the ‘Big four’, that are the most important fashion events in the world. The other 3 are holding in New York, Paris and London. 170 fashion shows and debuts take place inside the Fashion Hub in Piazza Mercanti.

If you have fallen in love with ‘Made in Italy’ there are other events you can attend. MI, Milano prêt-à-porter in February shows you the most representative brands of Made in Italy and is good for those who look for quality and tradition.

Since 1962 Mipel is the reference event for the Italian leather goods. Here you can find bags, suitcases, wallets and other accessories made of leather and artisans’ creativity. Every year the exhibition takes place in Fiera Milano in March and September. During the same days and in the same place there is another exhibition addressed to the shoe industry, Micam Shoevent, where you can see sneek peak the shoes collections of the coming season. Other little events that are connected with Micam take place throughout Milan.

Where to sleep? You can sleep in the city centre or near the Fashion District.

Looking for tours? I suggest you a special tour to discover Milan’s nightlife enjoying a drink during the happy hour along Navigli district. Otherwise you can eat in a particular place, the tram, while crossing the Milan’s streets.