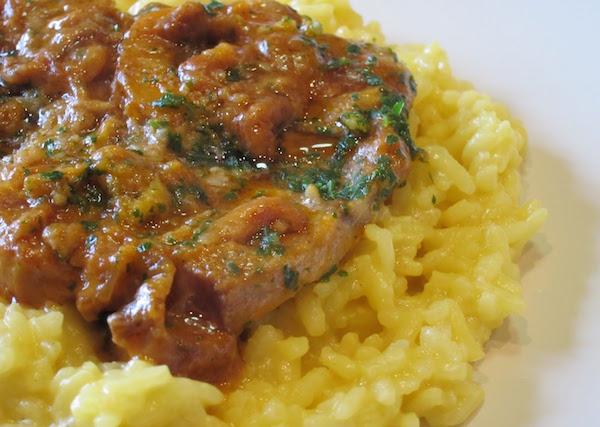 Last week we discovered the origin and the history of the Neapolitan pizza. Today we move to Lombardy to eat risotto alla milanese for our #FoodIS blog section.

Normally a primo, served on its own before the main course, risotto is surely one of the most famous Italian dishes in the world. In Italy it’s a dish widespread across all regions, with plenty of variations, but is consumed especially in the north.

To make risotto rice is cooked using many kinds of broth –  meat, vegetable, fish, seafood, legumes – together with butter, wine, onion and possibly other ingredients, until it gets a creamy consistency.

Of all the many types of risotto you can taste in Italy, the most characteristic recipe is risotto alla Milanese (Milanese style risotto), one of the most representative of the cuisine of Lombardy.

Risotto – whose name comes from riso, which is “rice” in Italian – has plenty of variations. In Italy you can find hundreds of risotto recipes, all with different ingredients, some of which are generally widespread in every region, like the common risotto with porcini mushrooms, or with Parmesan or with sea-food (but not together!). Locally you can taste other interesting versions, like risotto al Barolo in Piedmont, risotto alla pilota (made with sausage, pork, and Parmesan cheese) in Mantua or risotto with squid ink in Veneto. Other interesting (and weird) variations also include risotto with nettles or strawberry.

How was risotto born?

Rice was introduced in the Mediterranean area by the Saracens, who arrived in southern Italy and in Spain during the IX century AD. As a proof of that, just considered that one of the specialties of Sicily is indeed arancini, a kind of stuffed rice balls, coated with breadcrumbs and fried.

Someone says that risotto was born in Naples since it was in Naples that rice first arrived to Italy. Rice arrived indeed at the port of Naples thanks to the Aragonese of Spain during the XIV century. Neapolitans began to consume it as a main course but, for them, was not so unique as pasta, that, right at that period was establishing itself. Rice did not held back in Naples nor was held back, and soon emigrated to the north of Italy, where rice was already known as drug and used as ingredient for cake.

Thanks to the contacts between the Aragonese and the Sforza family, rulers of Milano, and thanks to the abundance of water, essential for rice to grow well, rice established itself in the farmlands between Piedmont and Lombardy, at that time belonging to the Duchy of Milan. Rice took a permanent abode in the marshy grounds of the Po Valley. Places like Oltrepò Pavese, an area in the province of Pavia, and the farmlands between Novara and Vercelli are still nowadays areas especially dedicated to the cultivation of rice (their refined variety of rice is considered one of the best in the world).

It was in Milano that risotto became particularly famous and especially with a local version: risotto alla Milanese, also called “yellow risotto” because of the color of its main ingredient.

The yellow color depends on the saffron plant whose flowers bloom in October. The upper part of the pistils contains an oily and aromatic substance; saffron pistils are dried and ground to obtain a yellow powder, a bit bitter and a bit spicy.

But why saffron? The explanation comes with a legend that dates back to the XIV century.

According to many authors the recipe of risotto alla Milanese directly descends from the “rice with zafran”, a kind of pilaf rice cooked with saffron – a Crocus flower grown in Asia Minor and in many Mediterranean countries – a Medieval recipe known by both Arabs and Jews. Anyway its official birth – as the legend says – is linked to an important event in Milano’s history: the construction of the Duomo, Milan’s cathedral and symbol.

Starting from 1385 artists, architects, craftsmen and painters began to arrive in Milano to give their contribution to the construction of the Duomo, an immense construction site remained open for decades to result in that incredible testimony of Gothic that Milano’s Duomo is still today.

Among the many artists there was Valerio Perfundavalle, a Flemish professional stained-glass artist. To give his yellow a touch of more sparkle, Perfundavallle usually used saffron. During one of his lunch break, to be consumed quickly, due to an awkward movement, a bit of saffron to be used for the windows fell on the rice. The rice colored in yellow seemed appetizing. But the flavor? He hesitated a while but then decided to taste it – it was just a plant, it couldn’t do him any harm – and found out it was delicious. Since that day, his glass windows were a bit less yellow and his rice a bit more.

Probably it was just a legend or a joke, but soon afterwards risotto alla Milanese started to be much appreciated, both for its taste and color. Soon this new way of preparing rice spread throughout the city of Milano and its surrounding area becoming very popular.

The current technique of slowly cooking the rice gradually adding the broth arrived later; in the beginning the recipe began with the preparation of boiled rice.

But the real risotto alla Milanese is not just saffron. What only a few know is that the original recipe also wants sliced veal shank. Therefore yellow rice comes together with ossobuco alla milanese,  a Milanese speciality of cross-cut veal shanks braised with vegetables, white wine and broth. In the early ‘900 also wine appears in the recipe.

Gualtiero Marchesi, a worldwide-known chef and master of creative cuisine, created a special version of the yellow risotto: risotto with saffron and gold. This fragrant risotto with saffron threads is cooked with vegetable (or chicken) broth and prepared with some tricks to make it particularly elegant. Two are the characteristics of this dish: the chef recommends to avoid the classic onion and to cook it separately with white wine, extract onion juice, filter it all and stir with butter cream. The second peculiarity of this risotto is the famous square gold leaf dominating the scene. For a final exclusive touch risotto is served on a plate with a black edge in order to make the yellow stand out.

How to cook the real risotto alla Milanese? The ingredients you need are butter, onion, broth, marrow bone, saffron, salt, cheese and… subscribe to the #FoodIS newsletter and download the recipe of risotto alla Milanese together with all the other recipes. Try to make it at your home and buon appetito!

I live in Bergamo. I am “a citizen of the world”. I have a Bachelor’s degree in Foreign languages and literatures. I am a communication and social media specialist, translator and blogger. Traveling is my greatest passion. I love unusual destinations and non-touristy places.