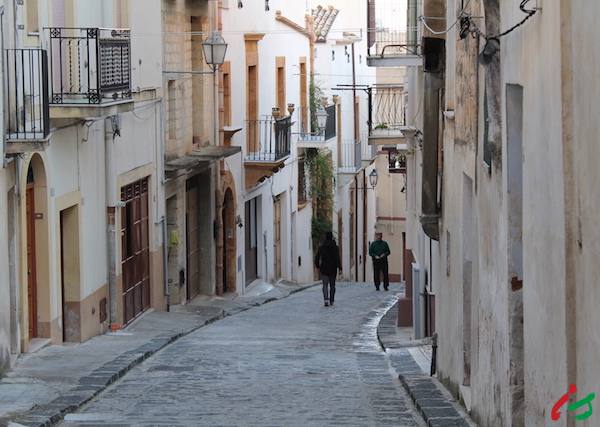 A day itinerary in western Sicily

As we told you in the previous articles, Western Sicily is a place where you can find a lot of very different sceneries in few kilometers. We went to discover this part of Sicily in December and today we would like to tell you about a Western Sicily day itinerary that we suggest you to discover the magnificent hills between Palermo and Trapani.

The first place of our suggested Western Sicily day itinerary is Giuliana. This little town is in a magnificent valley and all the houses are placed on the top of the hill.

The first place where you have to stop is just before arriving, to take a picture of the place from the opposite hill. Driving in this countryside, you can enjoy the nature that is luxuriant, with olive oil trees everywhere. Just arrived, you can visit the old and historical Norman Castle of Frederick II. This castle, restored in the 90’s, was build because Frederick II wanted to control the souther part of the Palermo province. It was perfect for it because from the top of the hill you can look up to the sea. The castle is built up with the typical Norman architecture, with white stones, that, opposite with blue sky, give us a perfect panorama.

Then, after a little walk into the town where you could have great conversations with some old men that normally are telling you “the ordinary Giuliana’s life”. We suggest you to continue your Western Sicily itinerary going to Sambuca di Sicilia, that you can find along the “Strada del Vino” (Wine’s way). Sambuca is the new name, the original one was Zabut, an Arab name. In fact Sambuca was founded by the Arabs around 830 A.D. on the top of Mount Genuardo, between the river Belice and Sosio.

Here what you must visit is the Arab quarter, developed around 7 ‘Saracen streets’, turned into an Arab-Sicilian living history museum. After the Arabs, the town was conquered by the Normans and the Swabians, although actually the country was inhabited by Islamic people until the XIII century, when they rebelled against Federico II that wiped them out completely in 1225.

The name before 1923 was Sambuca Zabut, then the Fascists changed it into Sambuca di Sicilia, to diversify it from a village in Tuscany that is also called Sambuca. Here we suggest you to get lost into this beautiful quarter, then you could see a magnificent sunset. In Sambuca you can also visit a new wine cellar, where you can taste very good local wines.

The third place to visit during your Western Sicily day itinerary is Castelvetrano, in particular its churches.

The first one we suggest you is the San Domenico Church, because inside there is a really beautiful and famous stucco by Antonino Ferraro from Giuliana in 1574-80. Then, another place to visit during your little tour of the hills is the Church of the Santissima Trinità di Delia, called also the ‘Cuba di Delia’, a Bizantine – Norman style church.

The last place we suggest you to visit is the town of Vita, that in Italian means ‘life’. This little place near Palermo was almost destroyed during the terrifying Earthquake of Belice in 1968. The new town was reconstructed downstream of the oldest one. We had the luck to visit an house that was damaged but not destroyed, and that nowadays looks like it was in the ’60: an incredible jump into the past.

We think that this itinerary could be really a wonderful experience to discover this hilly part of this wonderful region. Perfect to taste the real soul of Sicily.

Next week we are going to tell you about a wonderful place full of history. Stay tuned!