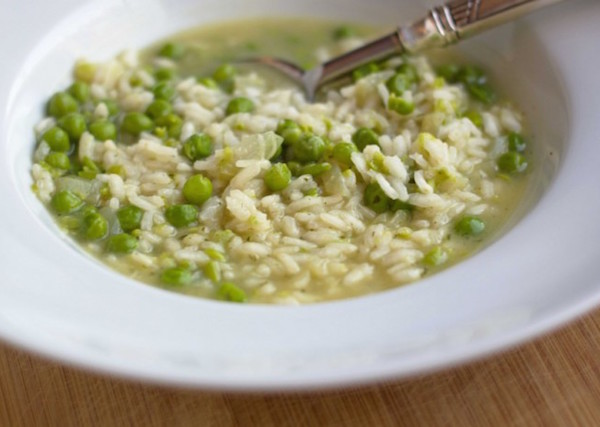 The Venetian rice and peas

Combining rice and peas in the same recipe, risi e bisi is one of the most popular dishes of the Veneto region, in particular typical of Venice, Vicenza and Verona, with several variants depending on the area.

It is a first course which, for its consistency, not too thick nor too liquid, is considered halfway between a risotto and a soup. Particularly suitable in winter, risi e bisi (which can translated as “rice and peas”) is excellent to be enjoyed especially in spring because during this season you find the best peas, main ingredient of this dish.

Anyway defining risi e bisi is not easy; even today many wonder if this very nutritious dish belongs to the category of risotto or soups. The answer is: neither one nor the other! The real risi e bisi is someway a dish between both of them and should not be too dry or too soupy, but a kind of thick soup.

The origin of risi e bisi

As for the origins of this dish, we can easily say that it was a dish almost regal: since the XVI century offering rice and peas to the Doge was a tradition in Venice. This dish used to be served to the Doge, the highest authority of the Republic of Venice, in the banquet room at the Ducal Palace, on the occasion of the feast of St. Mark, the patron saint of the city, which is celebrated every 25 April.

Why rice and peas? The answer is simple. Because rice was universally considered a fertility symbol (as with the handful of rice thrown on brides) and peas the spring excellence of a vegetable tipicaly grown in the lagoon gardens. The dish was packaged and offered to all members of the Venetian government.

The thick rice soup with peas quickly spread to the plains close to Venice and expanded to also include the territories of Vicenza. With the intensification of the trade relations between Venice and Vicenza the local agricultural products started circulating throughout the region. Rice and peas became the celebratory dish of spring, since this is the season when the first crops of peas are harvested. From Veneto this dish spread to all eastern Adriatic cities and also to Greece, Turkey and Lebanon, where even today you find this kind of dish in the menus.

Although it may be considered a “royal” dish actually it has always been of poor origins, nutritious and tasty, made up of simple ingredients that could be easily found in the market stalls. However it is believed that the Venetians took inspiration for this dish by the cultural influences of the Byzantines, with which they had extensive trade, and whose culinary tradition used to accompany rice with vegetables.

The fame of this dish is also related to some verses by Carlo Goldoni, a well-known Venetian comedy writer of the XVIII century, who used to represent scenes of everyday life with a strong reference to the flavors of the territory. Even during the Italian unification, risi e bisi had a starring role: when the Venetians were under the Austrian rule, the cry of ‘Risi e bisi and strawberries’ was used to celebrate the colors of the future Italian flag (white, red and green).

The peas and rice of the territory

Risi e bisi is prepared with typical local ingredients like the rice of Grumolo delle Abbadesse, which is a characteristic variety of vialone nano rice, and bisi of Lumignano, a variety of pea grown in the area of the Berici Hills, an area particularly suitable to the growth of the crops. This variety of semi-fine rice, with medium thickness and semi-long grain and round shape during cooking absorbs less liquid and does not swell like the classic Carnaroli rice used for risotto.

For the realization of the dish you use every part of the peas, including the pods, that, once washed, are immersed in water and boiled to obtain a rather thick broth that, once filtered, will be merged with peas and the rice to allow cooking. Even bacon is part of the traditional recipe of risi e bisi and is used to give more flavor to the dish.

At the foot of the Berici hills the techniques of preparation of this ‘risotto’ with peas, which looks like a dense soup, have settled, established and perfected: a simple dish, tasty and satisfying, especially suitable for autumn and winter months.

If you have the chance to visit Vicenza don’t forget to taste this dish, whose secret lies, perhaps, in the ability to use every part of the peas, starting from the pods, which are responsible for flavoring the broth.

Risi e bisi are a soup of a variety of risotto? Neither this nor that; this risotto, like other Venetian risotto, has a distinctly different method of cooking rice from that of Lombardy. In Lombardy rice is carefully roasted in butter, before cooking it with a gradual addition of broth. In Veneto the rice is cooked on the stove and has a slightly soupy consistency.

Another secret is the peculiar technique of soffritto, in which the Venetians are masters. This technique requires that rice is poured hot into a sautéed of butter, onion and celery, bacon or ham, and only after that it is well browned and gilded, you add additional broth.

A few years ago in Scorzè, one of the most famous producing areas of bisi, the original recipe of risi e bisi was registered at the local Chamber of Commerce. According to the regional culinary tradition it is expected the presence of bacon to give more taste and the use of each part of the peas, including the pods, which are cooked in the cooking broth and then whipped. Peas are celebrated in the annual festival of Bisi that takes place in Peseggia. On this special occasion you can taste the original recipe of Risi e Bisi.

For the success of this recipe fresh peas are absolutely necessary. The best ones are those sweet and juicy that ripen in spring and summer. And pay attention not to call it “risotto”, Venetians would surely be disappointed!

Apart from rice and peas? Find out here the true recipe of risi e bisi!