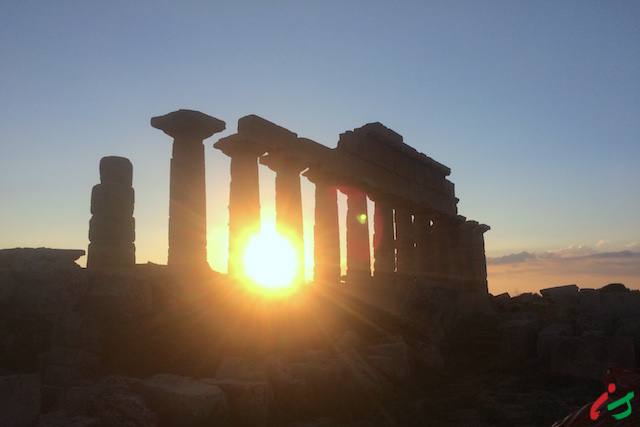 Let’s go on with our West Sicily itinerary!

There are many movies set in this region, one of them is “Il Padrino” (i.e. The Godfather), which made Sicily world famous. Probably the worst aspect of the region became famous but we hope that you will go beyond the stereotypes and the prejudices. Otherwise you will miss a wonderful area with an unbelievable treasure of artworks and history.

Sicily was one of the most important landing places in the Mediterranean sea at the time of Greeks, Phoenicians and other famous sea conquerors due to its strategical position. Today we can admire fabulous sites dating back to periods when Sicily was politically important.

Today we are going to tell you something about one of the most beautiful places that you can find during your western Sicily itinerary: the Selinunte Archeological Park. We started from the Natural Reserves of Torre Salsa and Platani River, then 4 towns to visit in western Sicily and today an archeological park where to discover the glorious past of the region.

Did you already know the Selinunte Archeological Park?

We begin with a little bit of Sicilian history: Sicily was part of Magna Grecia, when Greece was the most important Mediterranean empire. Here in Sicily you can find a lot of signs about this passage, like the Valle dei templi (i.e. Valley of temples) in Agrigento or Selinunte. Our West Sicily itinerary today is about this interesting historical city, that is near Castelvetrano (Trapani Province), and represents the biggest Archeological park in Europe.

In the archeological site, that is an acropolis, you can see some temples and other secondary constructions on a hill and some others on the top of another hill nearby. You can see a lot of the original site, but some parts of it are really damaged by the passing of the Carthaginians and of the time, and by strong earthquakes. Another temple, called Temple E (the Hera’s Temple), was built and one part of the Temple C. In this Archeological area were found also a lot of sculptures, that you can admire in the National Archeological Museum in Palermo, except the most famous one, the Ephebos of Selinunte, left into the park.

The History of Selinunte

Selinunte was called Selinùs, that is a kind of celery, also printed into the city’s coins.

The city has a really short life: only 240 years! In fact, it was founded in 650 BC by Diodoro Siculo and in few years it reached more or less 100,000 inhabitants. Selinunte was very rich thanks to its influence on a really big territory in western Sicily. In the beginning, Selinunte had great deals with Carthaginians and afterwards allied with Siracusa. After different battles for the domination of Sicily, there was the final one with Carthaginians, which destroyed Selinunte in only 9 days.

The city was rebuilt only in the Acropoli Area and it became the headquarter of the Romans during the war against Carthage. Then, it was occupied again by the Carthaginians until the evacuation in 250 B.C. Selinunte was not inhabited again, because of its rivers and malaria. Only some monks lived here in medieval time. A big earthquake turned its monuments to pieces. Afterwards the Arabs tried to make the city relive calling it Rahl’-al-Asnam” (Pillars’ village). We have to wait until the XVI century to see the city founded again.

The biggest archaeological park in Europe

The Selinunte Archaeological park was established by the Sicilian Region in 2013 and covers an area of about 270 hectares. The Acropolis is a plateau overlooking the sea that was surrounded by walls.

At the entrance there is the Tower of Pollux, built in the 16th century against the pirates, above the remains of an ancient tower or lighthouse. Inside the acropolis, you find 2 main roads that intersect with right angles. During the early years of the colony were built small shrines, 50 years later replaced by larger and lasting temples. The location of the agora is still uncertain. The different temples that you will see, many destroyed and others partially reconstructed, have been renamed with letters of the alphabet.

Temple O and Temple A are now mostly ruins: they have a structure almost identical to each other, similar to Temple E. Temple B is from the Hellenistic period. Temple C is the oldest one, dating back to 550 BC. In 1925-27 it was reconstructed and on the north side numerous columns of this wonderful temple were raised. Temple D instead was built in 540 B.C., while Temple Y is an archaic temple, also known as the “Temple of small Metopes”. Around Temples C and D you can see the ruins of a Byzantine village of the V century A.D., built with recycled materials. Some houses were buried by the collapse of the columns of Temple C: it showed that the earthquake that led to the collapse of the Selinunte temples must have occurred in the early Middle Ages.

Other important temples are the Temple E, also called Temple of Hera and the Temple F. The Temple G is the largest of Selinunte and one of the largest in the Greek world. In addition, on the western hill called Gaggera, we find the sanctuary of Malophoros, dedicated to the goddess of fertility. Around Selinunte some areas used as cemeteries were identified. The material for the construction of the city, made of limestone shoals, largely came from Cusa’s Cave, 13 km away from there.

The rediscovery of Selinunte

Once, to appreciate the Doric style in Sicily you had to go where the Greek temples were still standing: Agrigento and Segesta.

Squeezed between these 2 most accessible examples, Selinunte has struggled for a long time before winning the attention of tourists. Only at the end of 1700 Selinunte became part of itineraries. The Selinunte architectural development is very interesting: it had a development process and land use made it one of the most urban center and with much economic growth in Greek Sicily.

Among the most important finds are sources and treaties on bronze plates and ceramic tablets, that testify contacts with polis (cities) as Leontinoi, Gela, Megara, Akragas and others. This tablets tell us of a Sicily that even in the past was a mix of diversity and sub diversity. In short, Selinunte is an ideal place to round off with a dip in the story your itinerary in western Sicily.