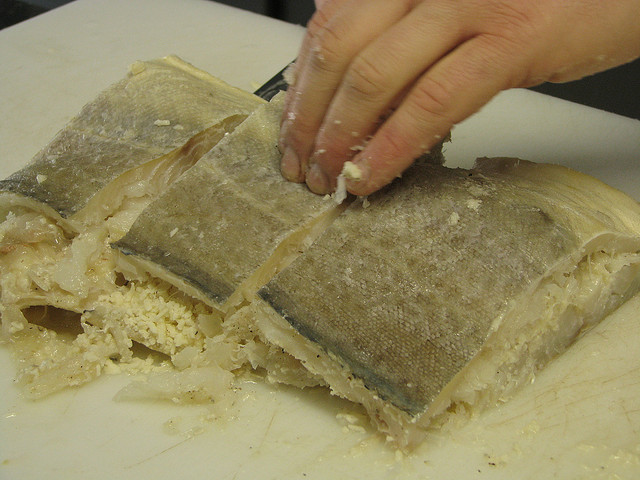 Food in Italy is something always serious and many of our typical regional dishes are not well known abroad.

Even if pizza and pasta are mostly common in any part of Italy, certain other recipes are so peculiar that, even 20 km far from the original zone, they disappear becoming something else.

I’m here today to write something about 3 typical dishes of the area at North of Vicenza.

They are suitable for any time of the year, but they are very often prepared in winter mostly at the end of Carnival. The names are not in Italian but in dialect: gnocchi con la fioretta, bacalà a la vicentina and bigoli con l’arna. Let’s start with my favourite First of all it is important to define what fioretta is. It is a part of milk, the one that can be obtained by making ricotta. Fioretta is so soft and delicate and, once upon a time, in the mountains people were used to mix it with flour in order to obtain little pieces of dough to be cooked in hot water and  dressed with butter and cheese. The name is gnocchi but there are no potatoes inside.

The second dish is the Imperor of Vicenza Province: Bacalà a la Vicentina, i.e. our typical way of cooking Stockfish. That kind of cod arrived in Vicenza in XVI century and became very famous in the kitchen of nobles families.

In Vicenza exists nowadays a broderhood of Bacalà that checks and defends the ancient real recipe of preparing Stockfish. It is prepared with patience and art, using milk and a lot of time. Bacalà is written in dialect with only a ‘C’ and it is always served with polenta. It’s day is normally Friday. Last but not least I introduce you to the third dish. Bigoli is the dialect word for “Spaghetti” or better home made spaghetti. Arna is simply duck.

This recipe is typical of Sunday family lunch and ragù with duck is something a little bit strong and heavy, but so tasteful and wonderful.

Any of these dishes is made to be eaten in company of someone else. Recipes, like the ones I wrote about, are the real taste of the family in Vicenza area.They ask for time, patience, good preparation and a lot of help in the kitchen. I remember my grandma preparing her bigoli con l’arna. She worked for about 2 days: one for pasta and one for ragù.

When I’m feeling the nostalgia for my mother-land I enter in my kitchen and I start preparing some of these dishes. Eating is one of the best way to travel and to recall wonderful thoughts in our mind and in our heart.