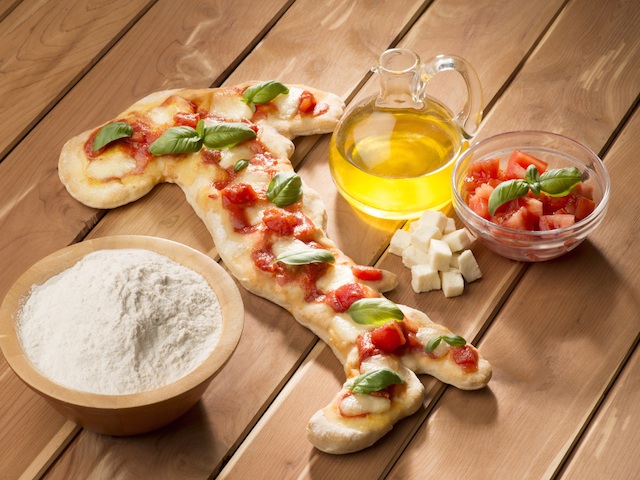 Myths about Italian cuisine are numerous. Would you know the reality?

Italian food and wine is well-known all over the world.

The freshness of the ingredients we use to prepare all of our typical dishes gives to them the particular taste, that made them famous. Italy is strewn by vineyards in many regions, so that we have different kind of wines.

Besides this variety is due to Italian history: we were divided into many regions, also smaller than the ones we have today. Each one had its particular traditions and subsequently this influenced the cuisine together with traditions. It can happen that the same dish varies from a town to another, far each other few kilometers.

The goodness of our products and dishes became more and more popular abroad that our cuisine began to be copied. Unfortunately what you know about Italian food mostly it doesn’t correspond to the reality. The best example is spaghetti bolognese… well, this dish never existed in Italy and above all in Bologna. The real dish is tagliatelle al ragù.

If you want to eat the real Italian food, you have to avoid touristy restaurants because they offer a menu a tourist expects to find. For example the famous Caesar salad is not an Italian creation, but it’s American. As well for Italian dressing. In Italy we have different habits as any other places in the world, so if you eat like you do at home or the customers in the restaurant are mostly from abroad, I suggest you to think about if you choose the right restaurant.

In Italy eating is like a mystic moment, a time to relax and spend time with friends or family. It’s not unusual to arrange a meeting in front of food and to be invited to have lunch together even if you are a businessman. Food for Italian people is very important and it must be genuine.

I want to debunk some myths about Italian cuisine. I researched on Italian food and wine among the foreign web sites and blogs. I found strange beliefs and I want to clarify some of them.

Our pizza is not like that one you find abroad. Once I ate pizza in Germany just only because I was hungry, otherwise that pizza would turn back.

The real Italian pizza is fluffy and crunchy at the same time. The only toppings we use are mozzarella, peeled tomatoes and some other ingredients such as bell pepper, salami, artchokes, bresaola, vegetables and so on. I have never been in America, but I realized that there exists a pizza called ‘Pepperoni pizza’. Well, it doesn’t exist at all in Italy. The Italian name of that pizza is ‘pizza alla diavola‘ (Devil’s style pizza). Otherwise if you ask for Pepperoni pizza, you will receive a pizza with bell peppers.

In the end if you want to live like a local, eat the pizza using your hands after cutting it into wedges.

Pasta is one of the most famous Italian dishes, but are you really convinced you know how to cook it?

I read on foreign blogs that abroad it is an habit to pour olive oil in the water where you will cook the pasta. It’s a really odd habit: pasta is cooked just only in the water.

As I told you before, forget about spaghetti bolognese at all. The most common pasta dish is pasta al pomodoro and it is very simple to prepare. Obviously throughout Italy there are different dishes prepared with pasta and pasta is just not spaghetti, but bucatini, tagliatelle, fusilli, penne and many others.

An Italian habit is dredging pasta with grated Parmigiano Reggiano or Grana Padano. Don’t do it if there is fish in your pasta!

In the Italian cuisine dressing is very simple. I remember when I was in England and I was surprised about the dressing: there was neither olive oil nor vinegar, but just sauces.

Italians are used to dress their dishes with only salt, pepper, olive oil, vinegar and, depending on the dish, onions and garlic. Sauces are prepared in particular cases and for specific dishes.

When you go to the restaurant, you often find a dressing set (oil, vinegar, salt, pepper) on the table. If you don’t, just ask to the waiter.

Coffee is one of the most common drinks all over the world. In Italy the typical coffee is what abroad is called ‘espresso‘. For us it is just a coffee. When you go to a bar you have to specify for an ‘American coffee’ or just a ‘caffè lungo‘. There will be much more water than coffee.

I discovered that Americans used to drink ‘latte’, but if you ask for it in Italy you will receive a glass of milk. Try to order a ‘caffellatte‘ or ‘latte e caffè‘!

I realized Alfredo is quite famous abroad, but in Italy if you mention Alfredo maybe Italians would relate it to a famous Italian song (i.e. ‘Alfredo’s fault’ by the singer Vasco Rossi).

Actually Alfredo existed. He managed a restaurant in Rome where celebrities used to eat. In the 70s they exported Alfredo’s recipes in a new restaurant situated in NYC. That’s why today some products are called with this name. In Italy we have no products or dishes with this name.

If you want to eat Italian food, come to Italy and ask to Italian people avoiding to choose touristy restaurants. Try to search for off the beaten track restaurants and you will be delighted!